Loss of smell and taste may last up to FIVE MONTHS after Covid-19 infection, study warns

Recovered Covid patients who lost their sense of smell and taste after getting infected with the coronavirus may not see their senses return for up to five months.

Anosmia, the loss or alteration of smell and taste, is formally recognised as a symptom of coronavirus infection.

Data from the Office for National Statistics shows half of coronavirus patients get symptoms with 16 and 17 per cent of these experiencing some form of loss of smell and taste, respectively.

Researchers from the University of Quebec studied 813 healthcare workers who contracted Covid-19.

More than a third (38 per cent) of those who lost their senses had not fully regained their taste after five months. 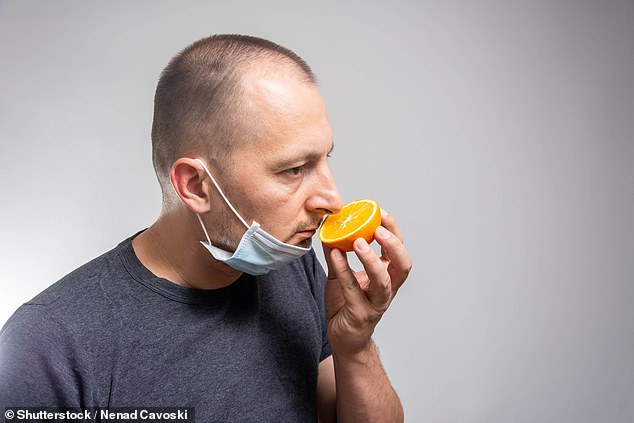 Anosmia is the medical name for a condition in which someone suffers a complete or partial loss of their sense of smell.

The most common single cause of the condition – temporary or permanent – is illnesses which affect the nose or sinuses, such as polyps which grow in the airways, fractured bones or cartilage, hay fever or tumours.

It is different to hyposmia, which is a decreased sensitivity to some or all smells.

Around 3.5 million people in the UK are affected by the condition, along with nearly 10 million in the US. It is surprisingly common and affects between three and five per cent of people.

Head injuries and nervous system diseases like Parkinson’s or Alzheimer’s may also contribute to the condition by damaging nerves in the nose which are responsible for detecting smells.

Participants in the study all filled in questionnaires and completed home tests to evaluate their sense of taste and smell.

These were done, on average, five months after they caught Covid-19 and therefore the researchers are unable to say whether or not anosmia endures for longer than this, as the data does not yet exist.

‘While COVID-19 is a new disease, previous research shows that most people lose their sense of smell and taste in early stages of the illness,’ said study author Dr Johannes Frasnelli.

‘We wanted to go further and look at how long that loss of smell and taste lingers, and how severe it is in people with COVID-19.’

People graded their sense of smell and taste on a scale of 0 to 10, with zero being no sense at all and 10 meaning a strong sense.

The average score for people recovering from Covid was an eight, whereas it was a nine for people before they got sick.

Of the 813 participants, 527 lost their sense of taste during the initial illness.

Thirty-eight per cent (200 people) of these had not regained their sense of taste five months later.

‘Our results show that an impaired sense of smell and taste may persist in a number of people with COVID-19,’ Dr Frasnelli said.

‘This emphasises the importance of following up with people who have been infected, and the need for further research to discover the extent of neurological problems associated with COVID-19.’

The study has not yet been peer-reviewed and will be presented at the American Academy of Neurology’s 73rd Annual Meeting between April 17 and 22.

Loss of smell and taste was officially recognised as a symptom of Covid on May 18, 2020, and since then has become an integral part of the diagnostic process as the NHS says the only three tell-tale signs of the illness are a fever, cough or loss of taste and smell.

They say adding fatigue, sore throat, headache and diarrhoea would allow ‘millions’ of unconfirmed cases to be detected.

Chief Medical Officer Professor Chris Whitty is already under pressure to change the official list of Covid symptoms after results from a government-led study, REACT, revealed thousands of infected people are slipping through the cracks due to the narrow guidance.

The World Health Organization and officials in the US recognise other less common symptoms such as muscle pain and diarrhoea.

But current Test and Trace rules mean swabs in the UK are only reserved for people with a fever, continuous cough or loss of smell or taste.

Professor Tim Spector, lead scientist on the Zoe app and an epidemiologist at King’s College London, said: ‘We’ve known since the beginning that just focusing testing on the classic triad of cough, fever and anosmia misses a significant proportion of positive cases.

‘We identified anosmia as a symptom back in May and our work led to the Government adding it to the list; it is now clear that we need to add more.

‘By inviting any users who log any new symptoms to get a test, we confirmed that there are many more symptoms of Covid.’

A group of 140 family doctors in London echoed this sentiment and called on health chiefs to expand the number of recognised symptoms.

They say many patients with milder signs have not even considered they could have the virus and have not self-isolated when they are most infectious.

The doctors add they must encourage patients to lie in order to get a test, which are only available to those with the three recognised symptoms.

Expanding the scheme to include runny noses in the depth of winter would likely pile immense pressure on the UK’s Test and Trace system.

Top scientists have been campaigning for the official list to be expanded for months, after warning it does not catch enough infections in the early stages.