RIGA (Reuters) – Facing a lockdown and a ban on crowds to curb the coronavirus, choral singers in Latvia have gone online to indulge in their favourite pastime. 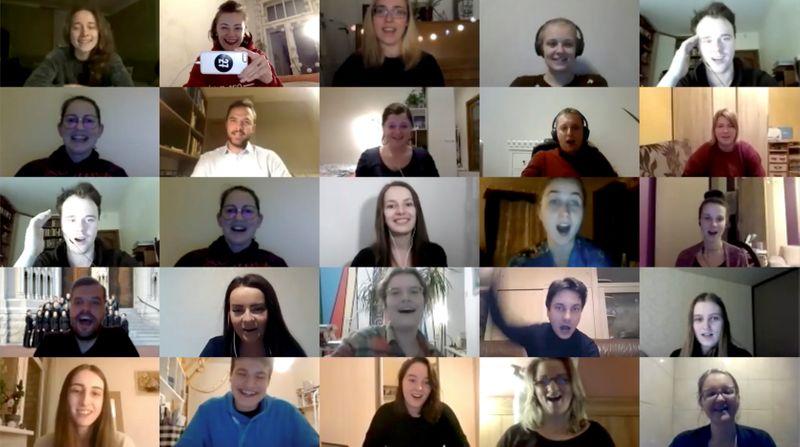 Singing in choirs is hugely popular in a country where a major music festival draws hundreds of thousands of spectators and 15,000 singers.

Choral singing played a role in the “Singing Revolution” three decades ago that helped Latvia regain its independence when the Soviet Union collapsed. Works by Latvian composers are particularly popular with local choirs.

But with 675 COVID-19 cases and 5 deaths, Latvia has banned groups of more than two from meeting in public, leaving the nation’s 380 choirs and their thousands of members at a loss.

For Sola – a mixed choir of 30 singers at the Latvian Academy of Culture in Riga – this has meant going online to continue sharing their passion, as have singers elsewhere in Lavia and beyond during the pandemic.

“We are trying to practice online,” conductor Kaspars Adamsons told Reuters. “We meet once a week for something which I wouldn’t call exactly a rehearsal, but more like a meeting in an online video platform, so that we can see each other and understand how we’re doing.”

Choral singing online faces technical difficulties which can result in a cacophony of voices, as demonstrated by Sola in a recent Facebook post here

People can’t sing online simultaneously, said Valdis Tomsons, artistic director of the University of Latvia’s Juventus choir, which has found a way around the problem.

Each singer recorded their parts which were then combined in an audio and video montage, Tomsons said. The choir posted the recorded song here online and other groups followed their lead.

“When I saw the video recording, I had such a fantastic feeling! I didn’t expect the result to be so beautiful,” said Inga Raubena, a Juventus singer. “It gives a sense of belonging.”