The opposition has revved up its attack on a potential weak spot in the Morrison government’s climate action agenda, pledging to waive government charges on non-luxury electric vehicles including the 20 per cent fringe benefits tax. 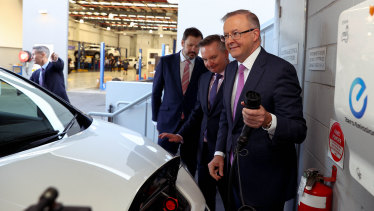 The move is targeted at electric vehicles sales to commercial fleets, which represent around 40 per cent of new car sales. The Morrison government has nominated fleet sales as the target of future policy, but is yet to finalise any measures.

“Electric vehicles cost more to buy and are cheaper to operate so there’s less opportunity to offset costs which makes it more challenging for them to stack up as fleet vehicles. Taking out the fringe benefits tax levels the playing field,” Dr Whitehead said.

For example, a $50,000 Nissan Leaf electric vehicle would cost the employer $9000 less under Labor’s policy, according to the Electric Vehicle Council.

The council’s chief executive Behyad Jafari said novated car leases, where employers pay for a vehicle out of employees’ pre-tax salary would also see “significant benefits” from the removal of the fringe benefits tax.

Mr Jafari said Labor’s measures, while targeted at business, were the right first step to grow the local market, which would help increase competition and bring more cheaper models to Australia. He also welcomed the party’s commitment to deliver a broader national electric vehicle policy when in government.

Labor’s pledge to remove import tariffs is not expected to do much to reduce car prices, with the majority of vehicles coming from countries already exempted from import duties by free trade agreements – including Japan, South Korea, Thailand and the United States.

The Morrison government targeted former Labor leader Bill Shorten during the 2019 election campaign for his pledge to lift new electric vehicle sales to 50 per cent market share by 2030, with Prime Minister Scott Morrison claiming the then-opposition leader “wants to end the weekend”.

But since then the government has found itself wedged between the electric vehicle advocates in its ranks, mostly from progressive urban electorates, and some of its conservative members – particularly among many Nationals MPs who oppose support for clean cars.

The Morrison government has promised an electric vehicle strategy since 2019. That initiative was broadened in February when Energy and Emissions Reduction Minister Angus Taylor released a discussion paper on its Future Fuels Strategy, including talking points on electric vehicles.

Mr Taylor said the government would adopt a “fleets first” approach but the policy is still out for consultation. The government’s $74.5 million Future Fuels Fund has announced its first funding initiative, with $16.5 million for electric vehicle charging stations in capital cities and key regional centres.

Labor’s policy is estimated to cost $200 million over three years, with the exemptions applying to vehicles prices below the luxury car tax threshold of $77,565.

Electric Vehicle advocates have warned that Australia could become a dumping ground for car makers’ old run-out models with internal combustion engines, as they send their limited stock into more attractive markets with incentives for clean cars.

According to polling commissioned by the Australia Institute in March, 62 per cent of voters support subsidies and incentives to reduce the cost of electric vehicles – including 65 per cent of Coalition voters and 64 per cent of Labor voters.

“Australia is one of a handful of OECD countries without greenhouse gas emissions standards for vehicles,” Ms Pearce said.