Even though comedian turned author Bec Hill’s children’s book series Horror Heights is all about strange and spooky goings-on, she still describes herself as a sceptic.

“I’ve personally never experienced anything that I’d describe as paranormal, she says. “I think there’s always a rational explanation for things. But I love hearing about other people’s experiences. It’s fascinating when people can’t explain something that happened.”

The first book in the series focused on a girl whose slime creation takes on a life of its own. In the upcoming second instalment, a boy swaps places with his favourite online influencer, only to find himself stuck in the virtual realm. 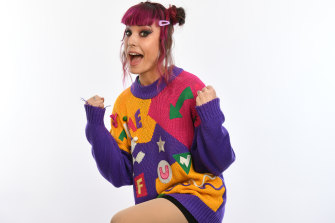 The Australian-born, now London-based Hill was inspired by the Goosebumps series, which she read voraciously as a child, begging her mother to take her to a local Dymocks to scour for new titles.

As with many Australians of her generation, she was obsessed with Paul Jennings’ short stories and Round the Twist series. Now, Jennings has given his seal of approval to the first Horror Heights book.

“That was really exciting,” Hill says. “He gave a very lovely quote (for the book’s blurb). I haven’t learnt it off by heart because I’m trying not to be arrogant, but that was a huge career highlight.”

The interest in horror that dates back to Hill’s younger years may surprise anyone familiar with her fizzy comedy, which features delightfully silly wordplay, puns and her distinctive flip charts. The latter are handmade pop-up books Hill uses to take the audience on romps through misheard lyrics, food and video games.

The flip charts have had a second life online, racking up millions of YouTube views during the pandemic. Their feel-good vibe and Hill’s infectious giddiness made them welcome serotonin-delivery vehicles for dull days.

Hill is something of an accidental online star, having used YouTube initially simply to archive old flip chart routines and odds and ends sketches. Then she found people were increasingly discovering her work through the platform.

“So I started doing it the other way around,” she explains. “I’d make a flip chart, upload it to YouTube first, and then do it at the shows. I think it’s more impressive to watch live than on screen because I have to choreograph it and learn all the timing. Sometimes it does go wrong live, but that makes it all the more special.”

The wholesome nature of Hill’s comedy meant that when she branched out into performing and writing for kids, she didn’t have to change her approach too much.

“Strangely, I’ve created stuff specifically for kids a couple of times, and it’s gone down way better with adults,” she explains. “Kids watch, read and learn at a much higher level than a lot of people give them credit for. You don’t want to talk down to them or underestimate them.”

The Horror Heights series is just one of the projects Hill has on the boil. She has a podcast with another Australian, “recreational mathematician” Matt Parker, titled A Problem Squared, and presents Makeaway Takeaway, a jovial art and craft show for children.

“It’s incredibly stressful,” she says of juggling creative outlets. “But I can’t imagine just doing one thing and nothing else. Some days I’ll think ‘I don’t feel like writing today’, but luckily there’s always another project. I kind of use each project to procrastinate the other.”

It’s been more than two years since the Adelaide native has been home, but she hopes to return for a book tour and comedy shows for both children and a general audience.

She has plans for up to 13 stories in the Horror Heights series. “All the books take place at the exact same time, and each is a different story of a child in the same class. There’s a lot to be found; my aim is to get people to try and find connections between stories and come up with their own theories.”

Planning the logistics of this spooky and sprawling story is getting complicated. “I’ve got a corkboard with a piece of string on it for each timeline … it looks like I’m investigating a murder.”

A cultural guide to going out and loving your city. Sign up to our Culture Fix newsletter here.