When it comes to gift giving, Kim Kardashian has it in the bag.

The KKW beauty founder treated her friend and ex-assistant Stephanie Shepherd to a special surprise for her 32nd birthday: a Hermés Kelly bag.

Shepherd, better known as Steph Shep, thanked Kardashian for the pricey present on Instagram Stories Sunday, writing, “Oh and this happened @kimkardashian,” alongside a video of herself opening the designer gift.

“This is so crazy,” she screamed as she unwrapped the purse, before Kardashian told her, “don’t cry” and gave her a hug.

Still, Shepherd was moved to tears by the gift, adding, “wait I’m crying now,” while someone instructed her to not “drop a tear on the bag.”

While Kelly bags typically retail for less than Hermés’ famed Birkins, of which Kardashian has many, they still come with quite the price tag. A Kelly 35 Sellier Noir Black Epsom bag with gold hardware, Shepherd’s version of the purse, is currently listed on eBay for nearly $25,000. 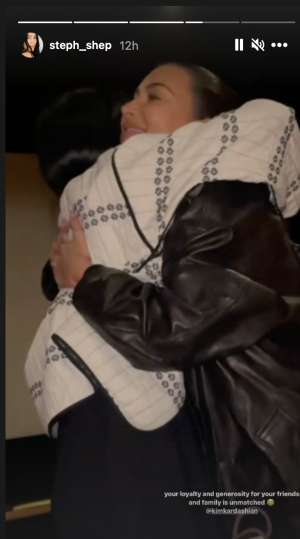 It seems Shepherd has had her eye on the coveted design for a while, as she told her friends, “Oh my god I was going to buy a knock off.”

“Your loyalty and generosity for your friends and family is unmatched,” she wrote in another Story, tagging Kim.

The influencer was hired as Kardashian’s executive assistant in 2013 and eventually became the COO of her company Kardashian West Brands. The reality star severed business ties with Shepherd in 2018, however, after she gave a revealing Refinery29 interview about the famous family.

Despite being let go as an employee, she still spends time with both Kim and Kourtney Kardashian. She modeled Kim’s Skims line in August and has even contributed articles to Kourtney’s Poosh website.