On Thursday night, Kayne West, a man known for his words, didn’t say a peep but instead let his work speak for itself, taking to the stage for an epic and emotion-filled finale for the launch of his latest LP, “Donda,” which is named after his late mother.

The release has been quite a journey for West. Talk of curated listening events was first heard in mid-July, when West confirmed the album was on its way, teasing its release in a Beats ad featuring sprinter Sha’Carri Richardson.

He originally premiered it to a packed crowd two weeks ago at Atlanta’s Mercedes-Benz Stadium. But not being satisfied with the result, West chose to camp inside the stadium itself to put the finishing touches on the album. The rapper — who is just as famous for his failed presidential bid and pending divorce from Kim Kardashian West — livestreamed his process, which saw him doing everything from playing songs for famous friends to working out while Justin Laboy got a haircut.

The second release was to start at 9:30 p.m. but he took to the stage closer to 10:30 p.m., clothed in all black with the word Donda across his back. Despite the wait, the crowd — dressed in Kanye merch like St. Pablo T-shirts, Yeezy sneakers, or flexing in the newest Donda pieces — was enraptured, chanting “Ye is god,” which built up the momentum before West took to the sparse and industrial stage. 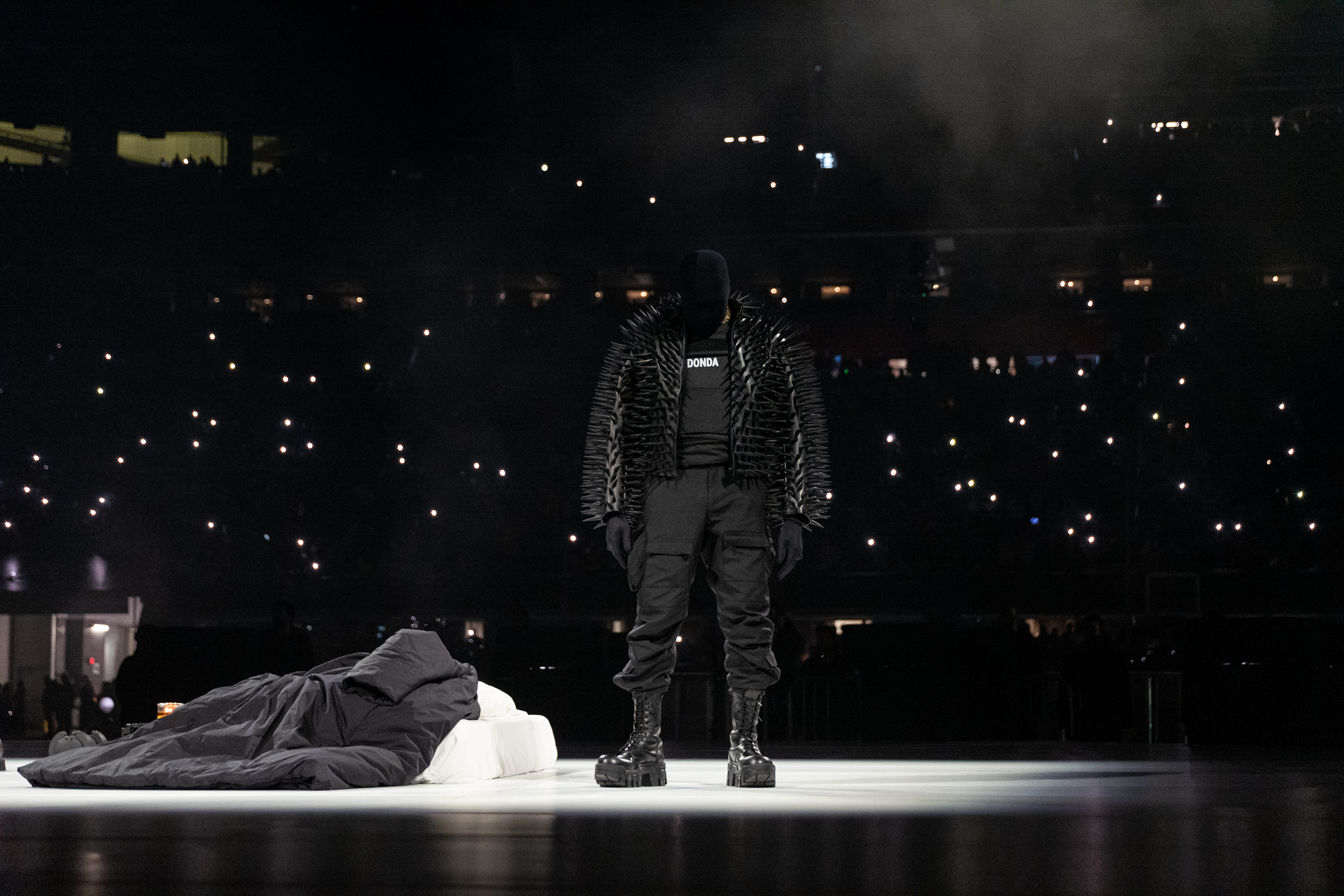 To say the crowd was excited is an understatement, since the rumor was that the second coming of “Donda” would be bigger and more explosive than the first. The theory was proven right, with thousands of dancers pouring into the space a few tracks in, dressed in a mix of black hoodies, beanies and oversized pants. An austere take on streetwear, they circled a lone Kanye, who was dancing, walking and just vibing onstage. It was the first of many grand moments that came from the brains of West and Balenciaga designer Demna Gvasalia, who West enlisted to creative direct the spectacle.

A host of celebrities showed up to support West, including Playboi Carti, Quavo and Offset — decked out in several massive diamond necklaces, the biggest being a dazzling nameplate; Rick Ross, Monica and Brandi. But the person most anticipated was Kim Kardashian (still West), who attended the first release — and via her Instagram Stories revealed she did in fact show up again, teasing pictures of her head-to-toe black Balenciaga look and an image of the show.

When the Mercedes-Benz Stadium, with its open dome and massive circle light feature, went black for the performance, Kanye disciples began chatting “Let’s go Ye! We love you Ye!” The new work, his 10th studio album, began by using interludes of his mother giving words of affirmation and encouragement. It set the tone for the deeply personal work, which sources said is meant to pay homage to the protection he got from his mother, aiming to pass it on to the greater world.

The tracks, 24 in total, featured a host of collaborators including Pusha-T, Travis Scott, The Weeknd and West’s “Watch the Throne” collaborator Jay-Z, who reportedly recorded his verse hours before West first played it. The work is ambitious and sees West in his most vulnerable headspace to date. 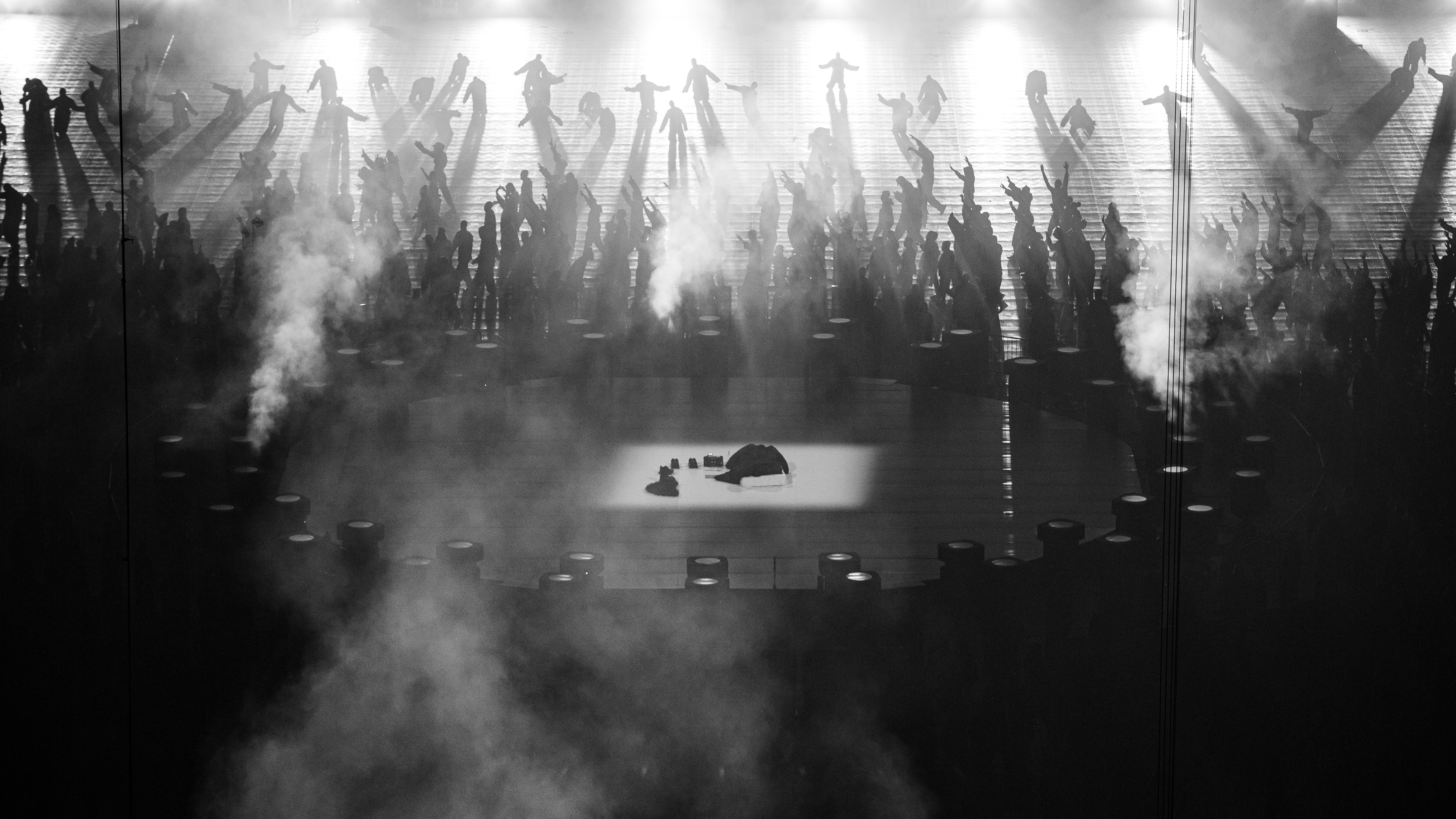 The space staging for the “Donda” event, with dancers surrounding the stage. BFA/Yeezy

Jay-Z’s verse especially hyped up the crowd, who swayed back and forth and screamed. Another interlude about a man who’d not seen his father because of him being incarcerated was a poignant moment, speaking of how he’d had kids who still hadn’t met their grandfather because he’d been jailed for so long. When it finished, the crowd clapped its loudest.

One track — a lament about his impending divorce, “Losing My Family,” was peppered with his mother’s words: “no matter what, you never abandon your family.”

The creative direction of Gvasalia and West involved not only thousands of dancers, but also a mix of choir people in “Donda”-logoed, earthy brown tracksuits and bare feet. They each had their face fully covered with black fabric as they inched out, some crawling or with hands raised, with the look of being possessed by West’s sounds. It channeled the spiritual energy of his Sunday Service or the Ye listening event in Wyoming, which lit up social media. 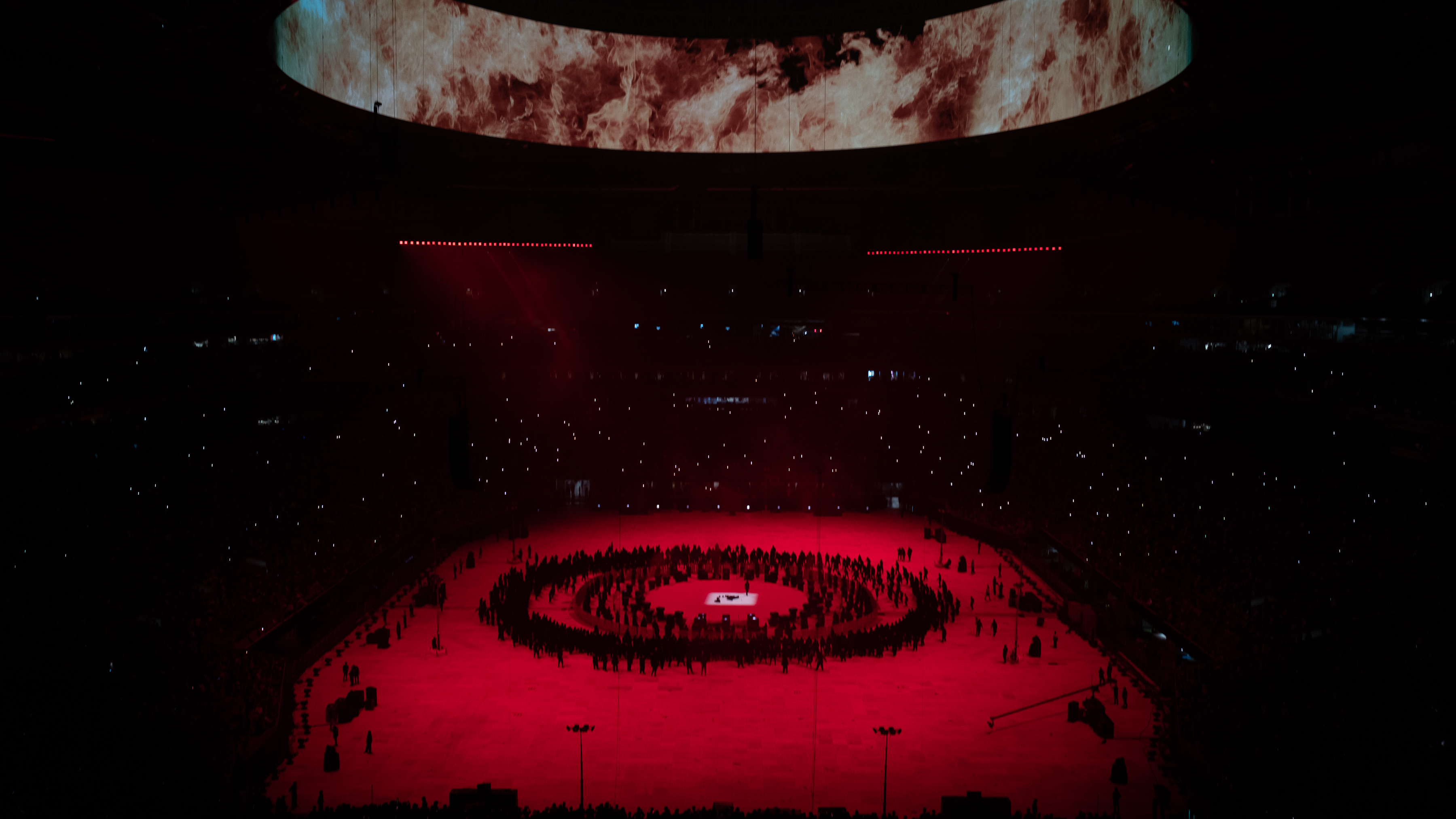 The light show was majestic, bathing the room in blood red light as the circular lights of the dome mimicked fire or white beams of light shooting up into the sky, a detail sources said took a lot of work as the beams reached four miles up and the creative team needed to secure sky permits.

Those white beams set the stage for the finale, when West levitated into the sky, floating above while the music swelled, an impressive moment that had his devotees in a fever pitch of excitement.

West’s late mother’s presence was felt throughout, as the lyric “and if I talk to Christ, could I bring my mother back to life” expressed.

While fans are chomping at the bit for the album’s release, some taking to Twitter to lament not knowing when it will drop, nothing was still said about a date at the event. It remains on pre-release at Apple Music, but is sure to get millions of downloads when it finally is available.