JUSTIN GAETHJE is the UFC's 'killer' in the cage – with a degree in Human Services.

The American headlines UFC 254 on Saturday when he faces lightweight king Khabib Nurmagomedov. 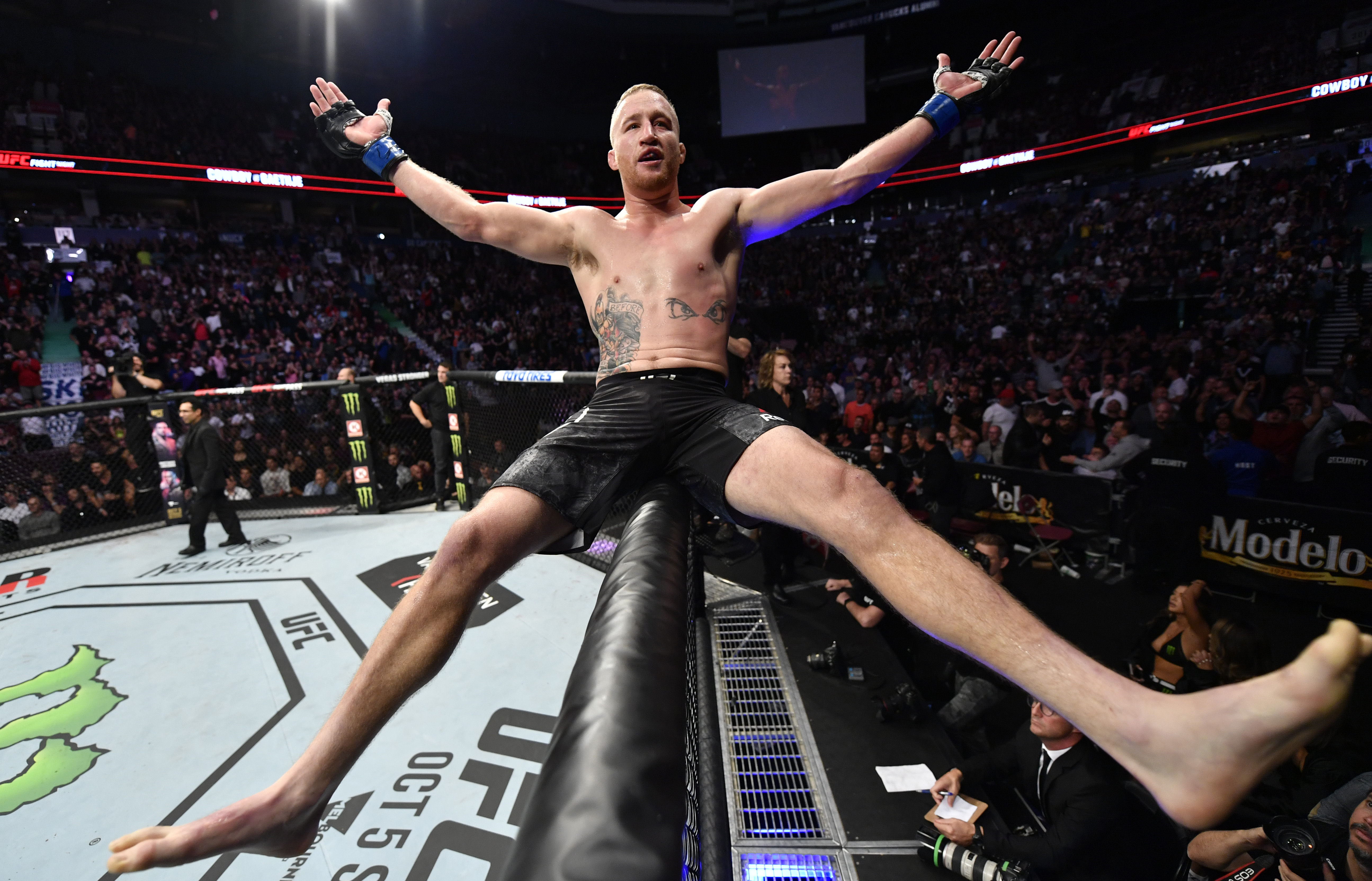 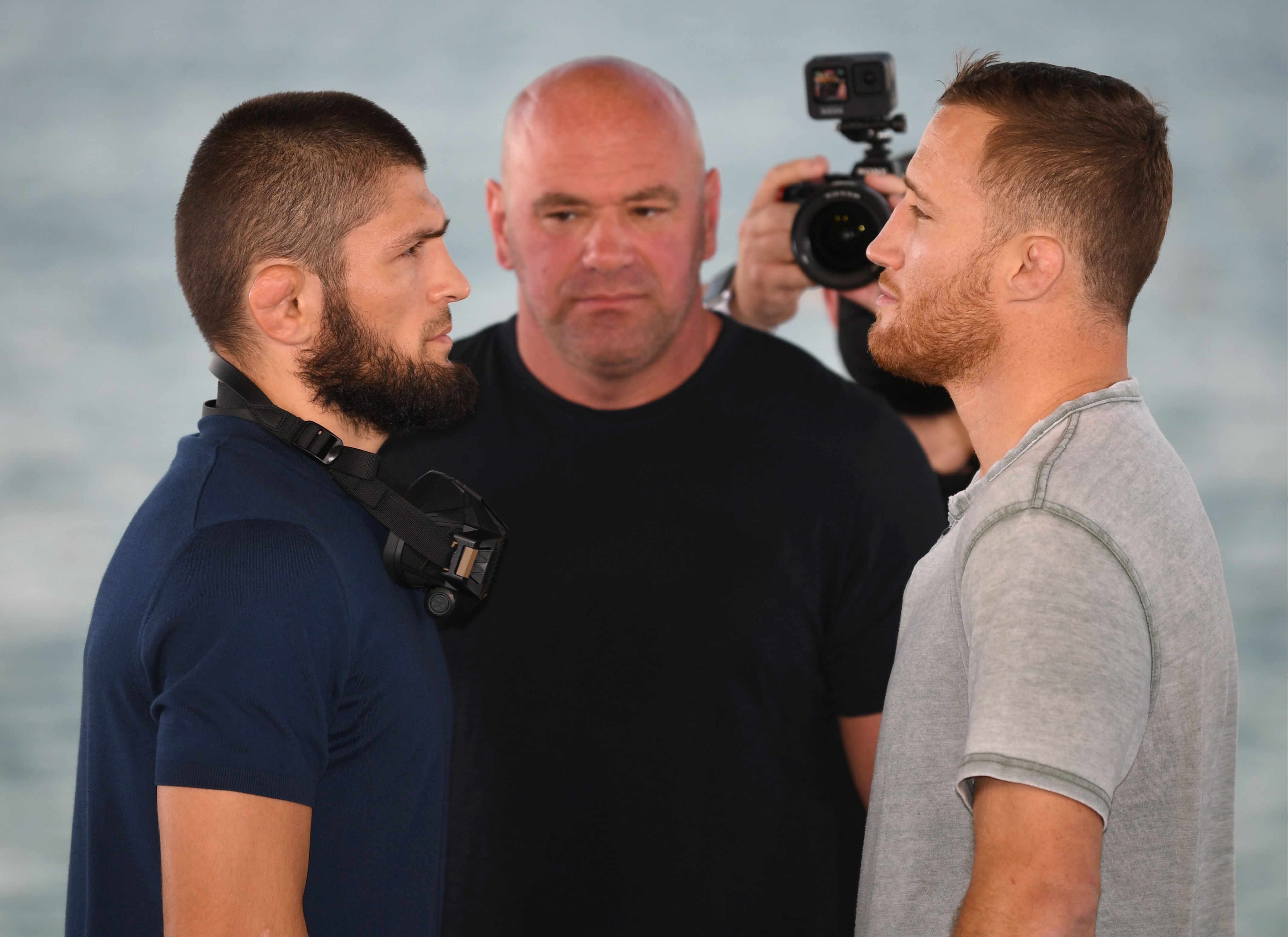 But Gaethje's life and career could have been so much different having graduated with the intention to do social work with at-risk youth.

It was only his passion for competition and fighting that would instead lead him into MMA.

But the 31-year-old still has plans to put his studies to use in retirement.

Gaethje said in May: “Being a good person and helping my neighbour, that’s all I care about.

"I have a human services degree. If I wasn’t doing this I’d be a human social worker.

“I’m a killer in here but as soon as I step out of the octagon you will not see that in me.”

According to Gaethje's long-time trainer Trevor Wittman, he has never seen a fighter so passionate about going toe-to-toe. 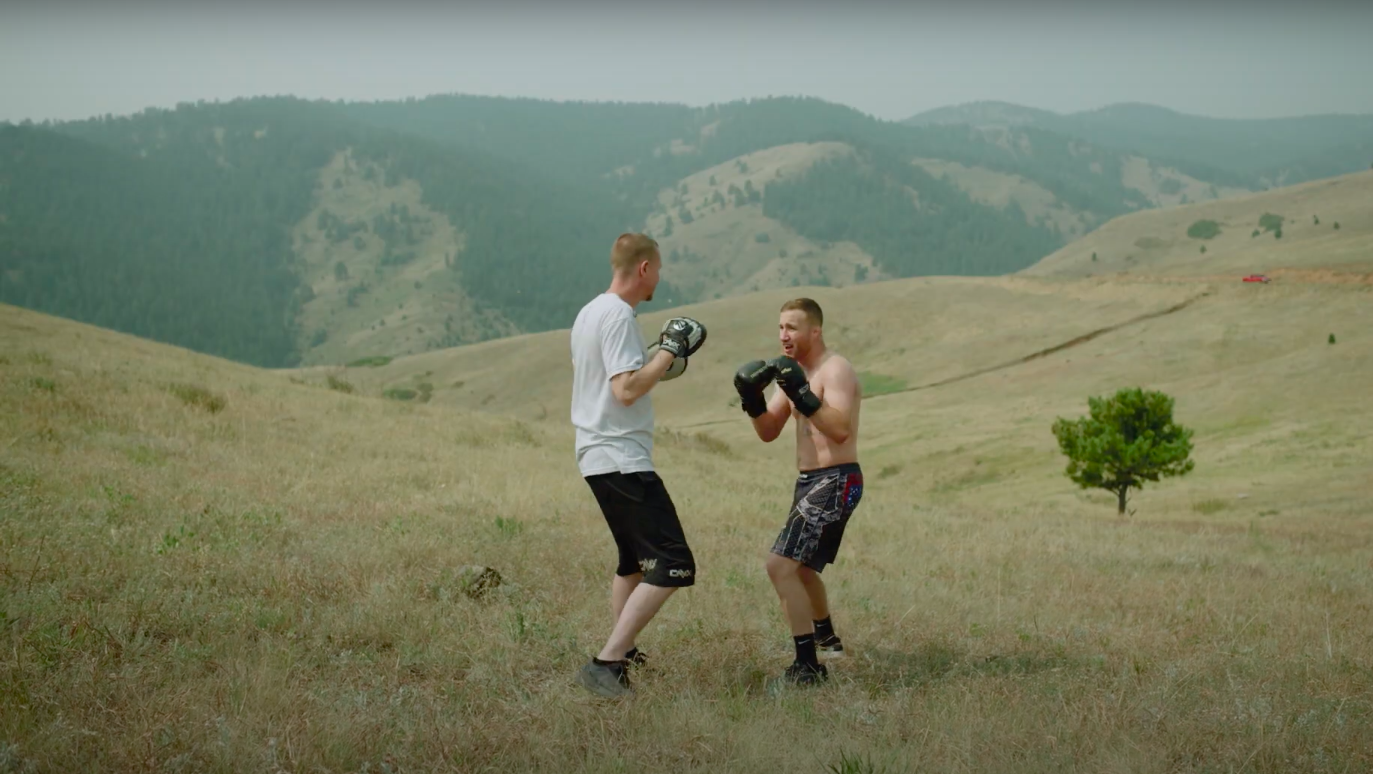 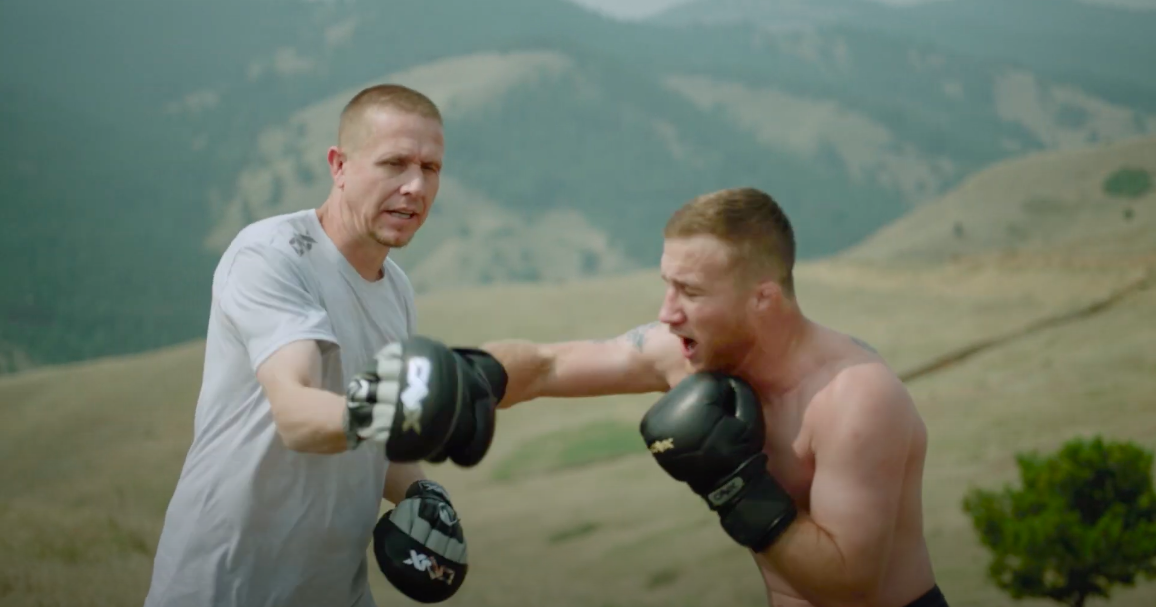 Wittman told the UFC: "I don't believe there is one athlete that competes in combat sports that loves it more than Justin.

"You can see it in his fighting style. He has fun fighting, he doesn't have fear."

He was brought up in Safford, Arizona, with his mum Carolina, a postmaster of Mexican descent, and father Ray, a copper miner with German roots.

Gaethje worked 12 hours, seven days a week as an 18-year-old in the summer at the Morenci mine just before he went to university.

He was told he would not last after accepting an offer from Division I University of Northern Colorado, but proved naysayers wrong by graduating with a bachelor's degree.

It also allowed him more time to wrestle, where he won a prestigious NCAA title and also grappled UFC legend Georges St-Pierre. 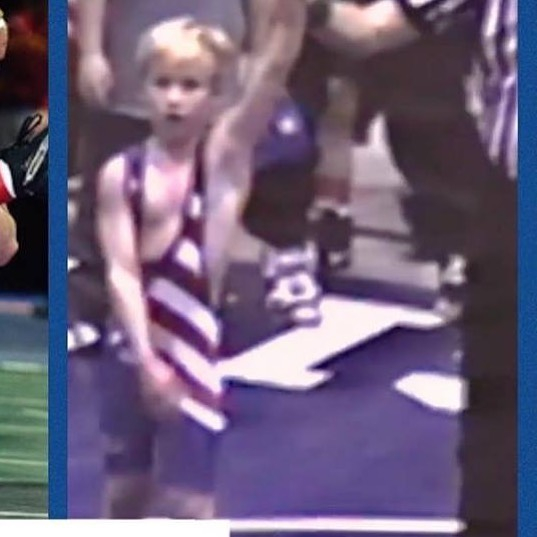 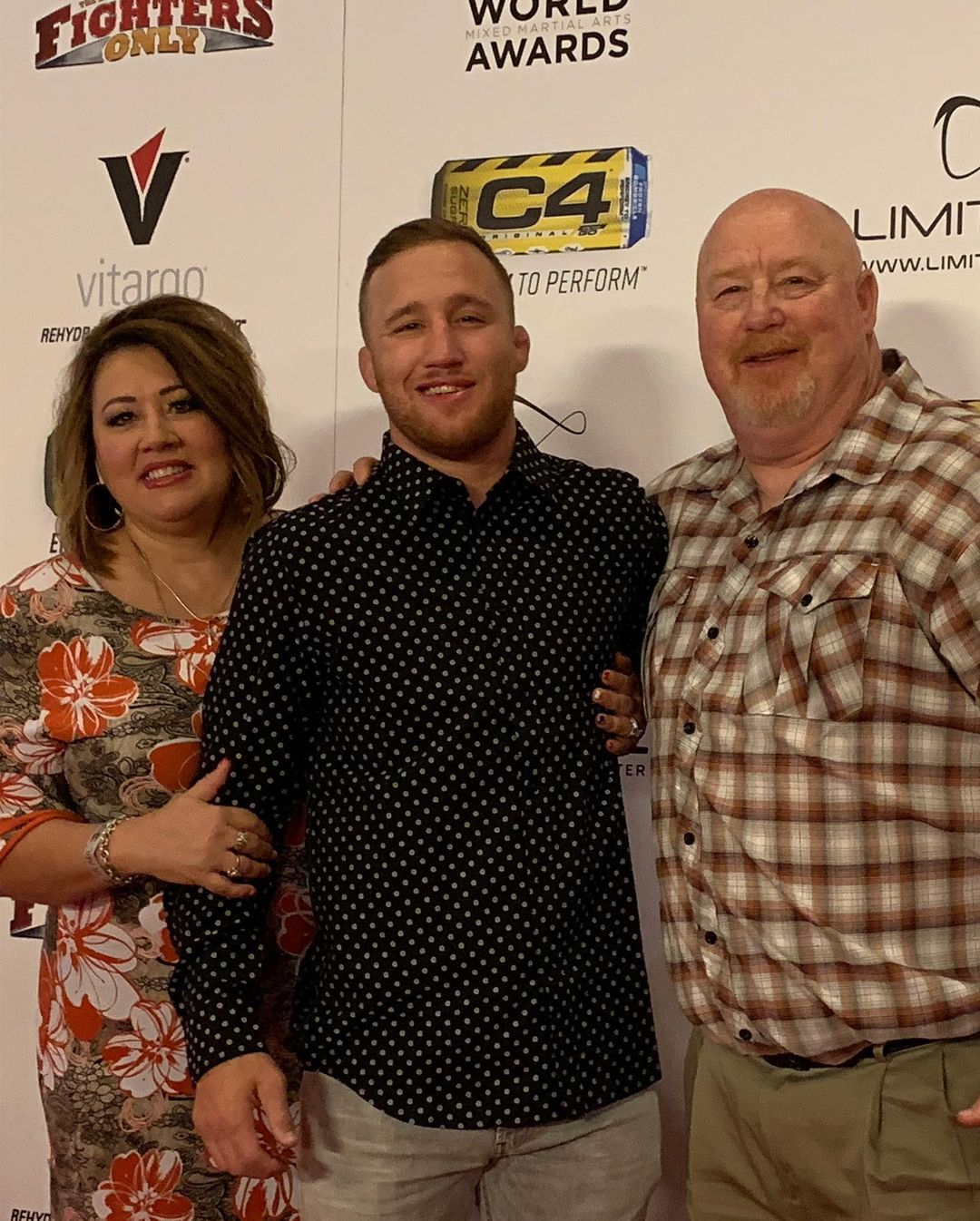 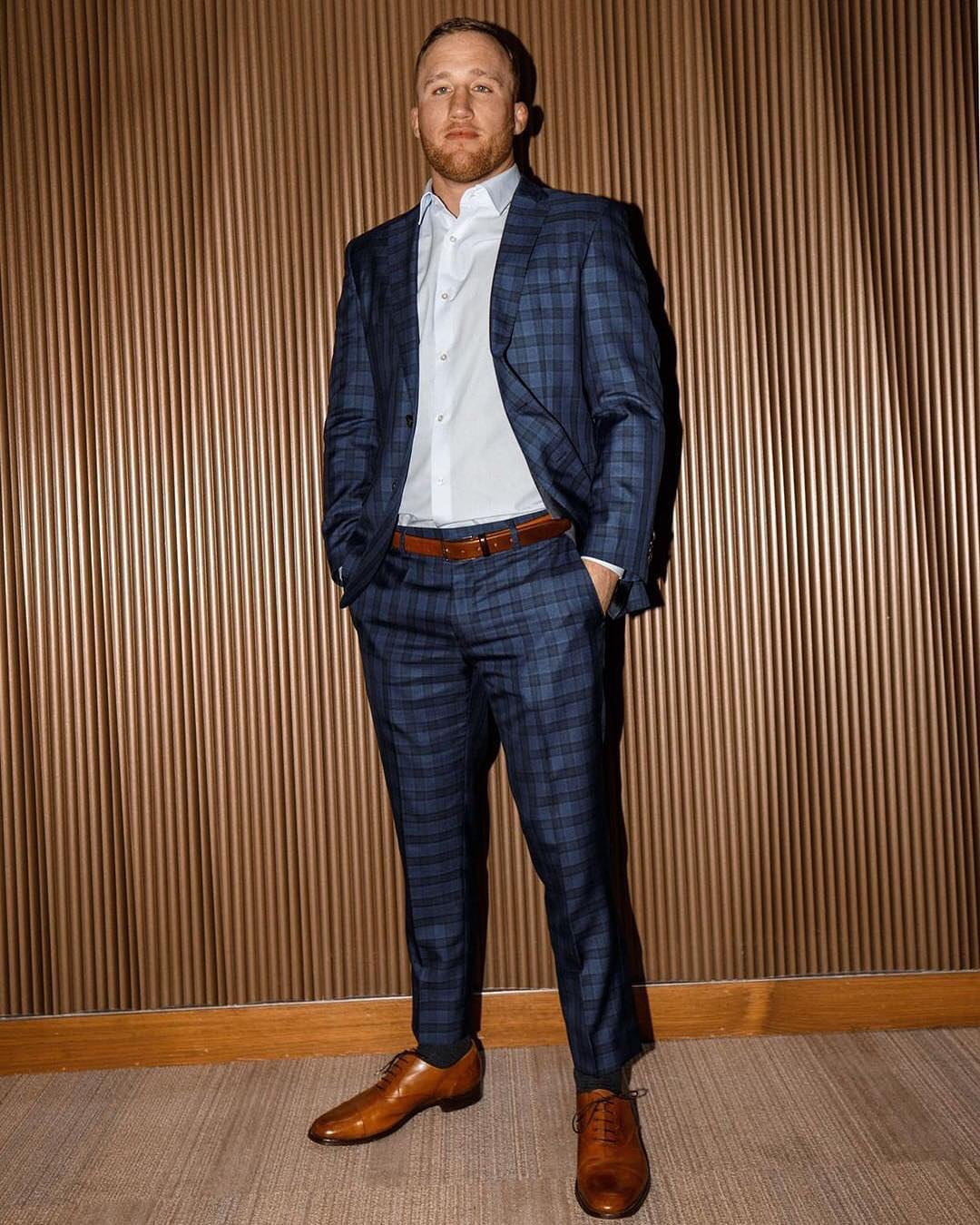 But transitioning into MMA – still an emerging sport at the time – had always intrigued Gaethje, who then had his first amateur bout in 2008, winning in 25 seconds.

After seven straight victorious, he turned pro in 2011, one year after his wrestling career ended with an NCAA All-America season.

Gaethje made a name for himself in America, and by 2014 he was the World Series of Fighting (now PFL) lightweight champion.

It was only a matter of time before the UFC took notice, and in 2017 Gaethje made his octagon debut in a thrilling battle with Michael Johnson, which he won in round two.

But his fan-friendly, slugfest-style would catch up with him, as he suffered back-to-back defeats, losing to Eddie Alvarez and Dustin Poirier.

Both received Fight of The Night, but Gaethje knew something had to change if he wanted to become champion, instead of attraction.

Coach Wittman told ESPN: "His purpose was always to be the most entertaining fighter in the world.

"I have never had anyone else say that to me. Not one. 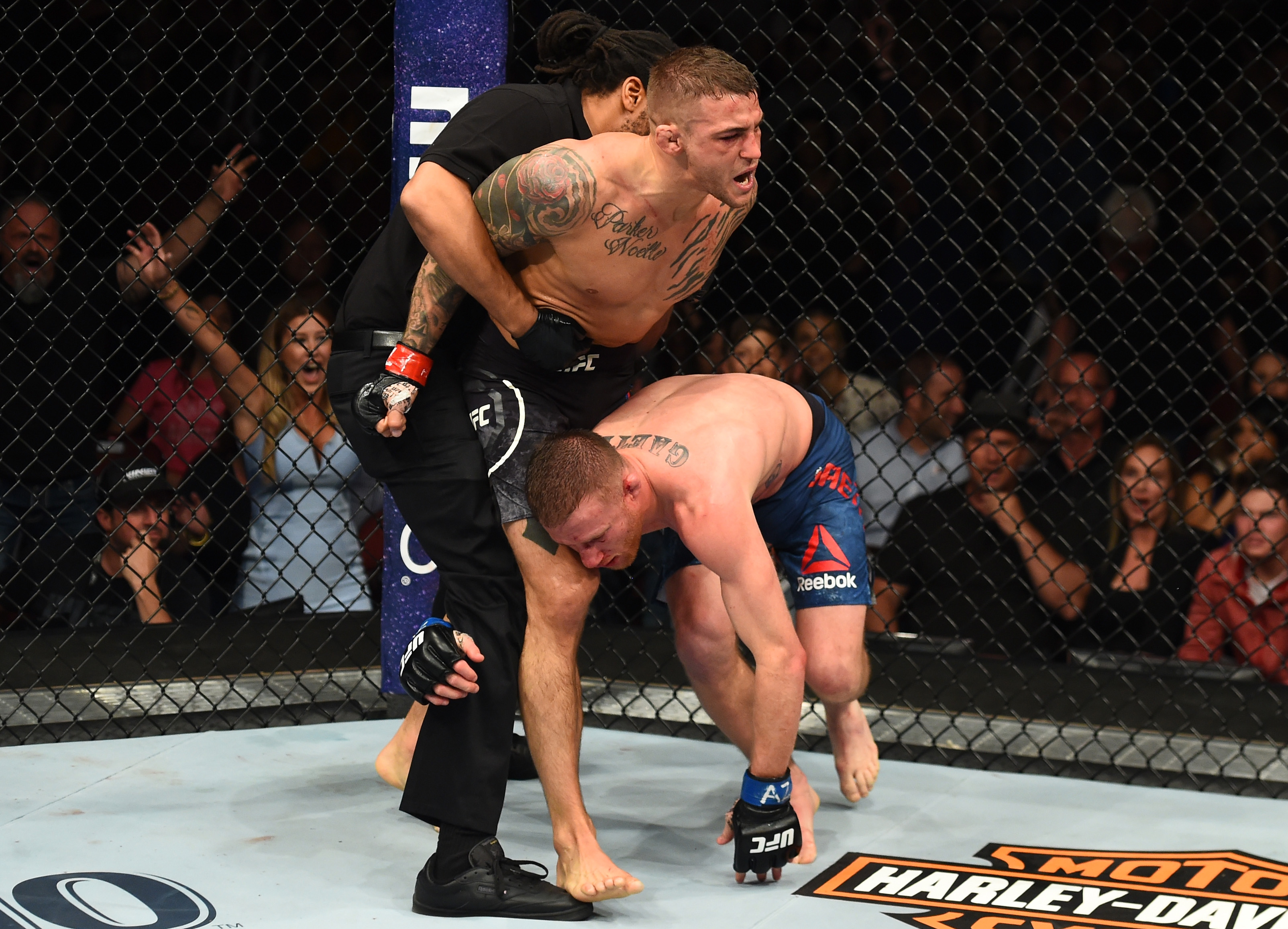 "I asked him after those two losses, 'Is your purpose still to be the most exciting fighter in the world?'

Gaethje has received more UFC bonuses with NINE than he has fights in the octagon (seven).

But he realised winning and becoming champ was more financially wise than putting it all on the line in the hope of receiving a performance bonus and credit from fans.

"But two of those times, because I lost, I only got paid half my money, because that's how it works in this sport. You get half to show and half to win.

"That wasn't cool with me. I felt I had legitimised myself as one of the most exciting fighters to ever step in the octagon, and now to solidify that, I need to win a belt." 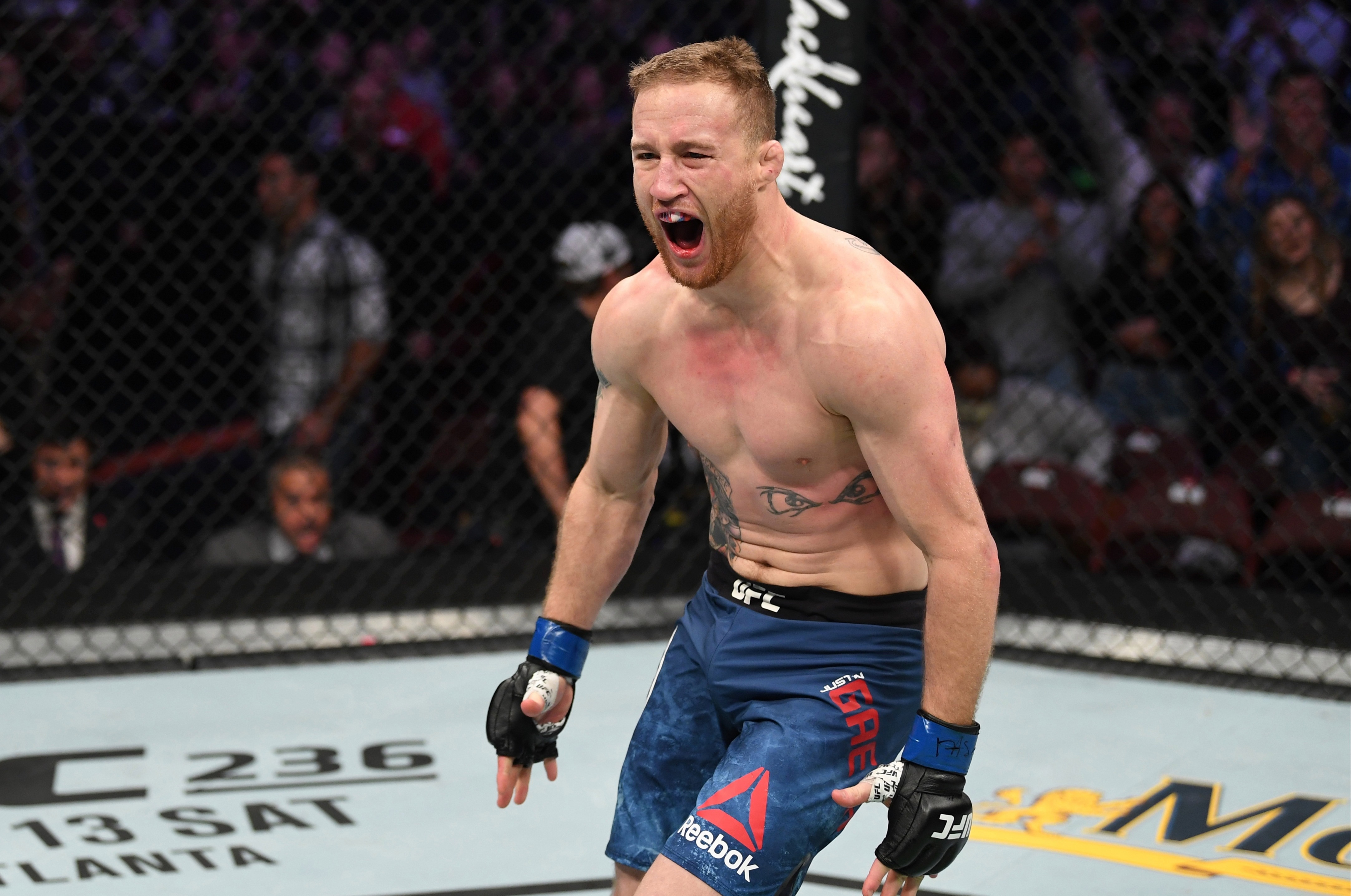 Having cemented himself as must-see fighter, Gaethje switched styles and began to show more patience in the cage, sticking to a game plan.

It led him to three consecutive wins, and the chance to fight for his first piece of UFC gold.

After Khabib was forced out of UFC 249 in May due to travel restrictions, Gaethje stepped in to face Tony Ferguson, 36, for the interim belt.

Ferguson was completely dominated throughout and stopped in round five, before then being rushed to hospital.

Gaethje neglected the interim strap post-fight, insisting that his focus was solely on dethroning Nurmagomedov, 32, unbeaten in 28 fights.

The former college wrestling standout – who has NEVER attempted a takedown in the UFC – is being tipped as Khabib's toughest test due to his grappling skillset.

Gaethje vowed to take Nurmagomedov into the unknown, and promised to make the feared grappler see blood. 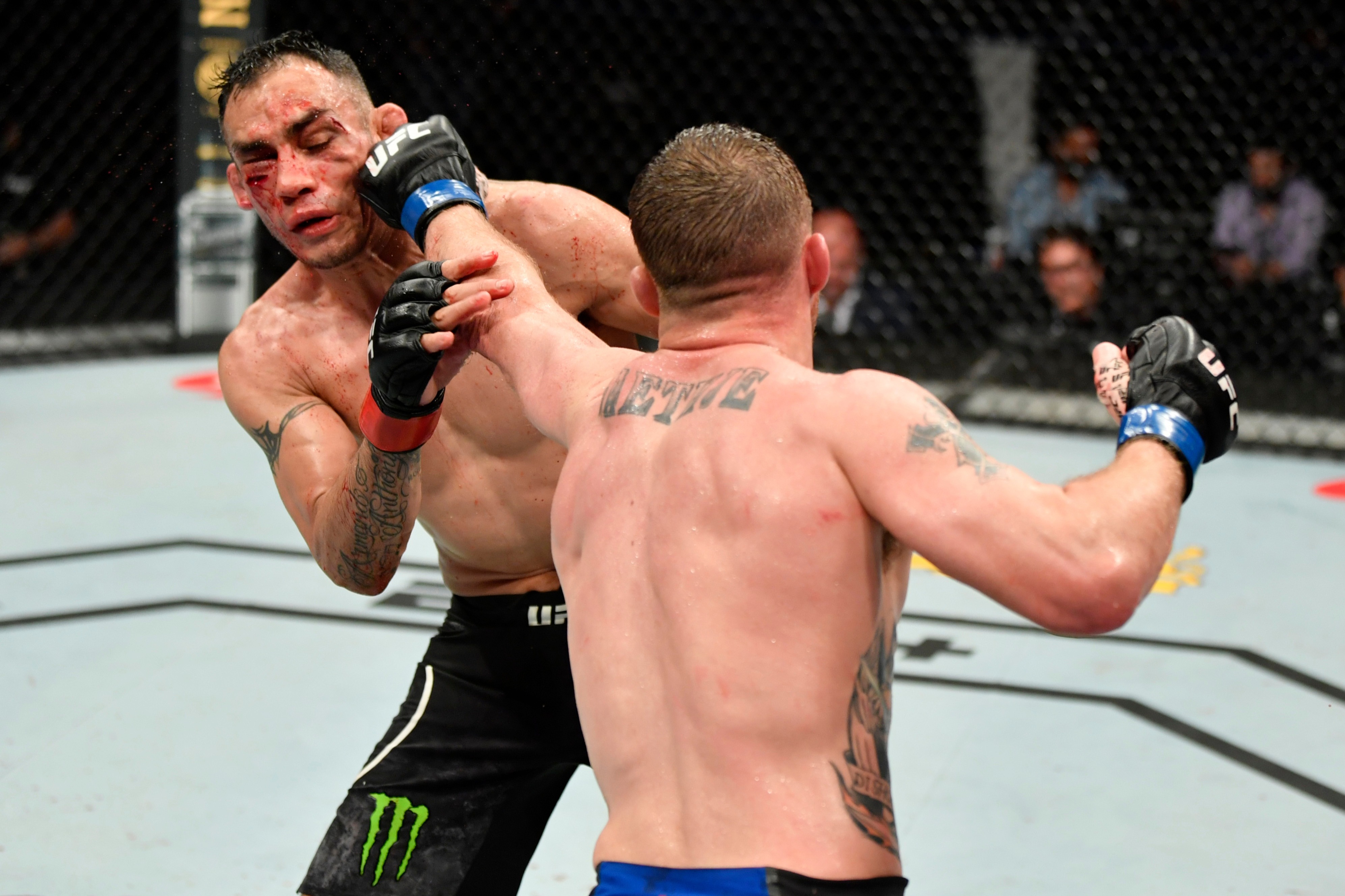 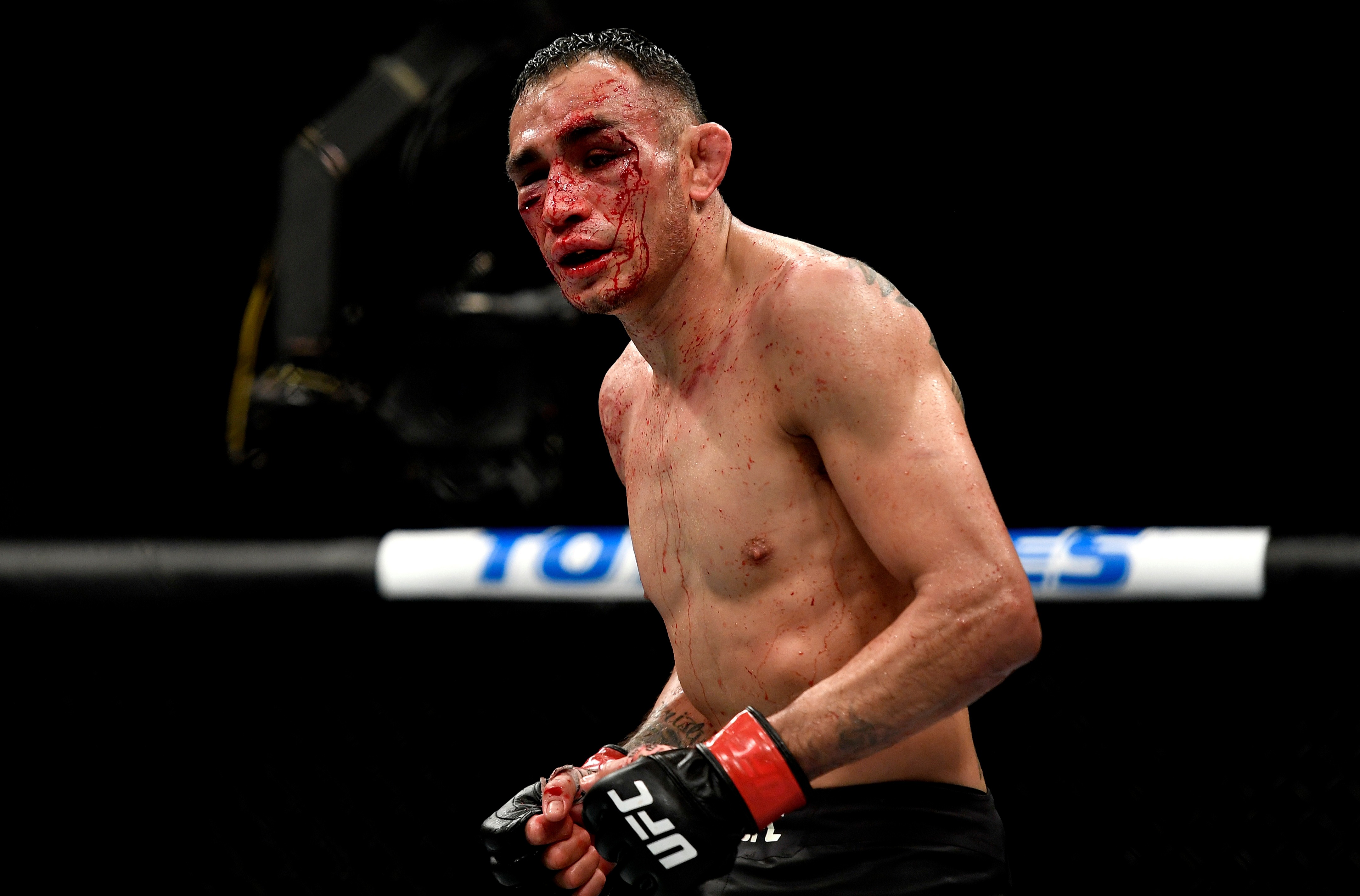 “I think he is crazy and loves competition but he isn’t quite as crazy as me. He also hasn’t seen his blood many times, I’m sure."

Gaethje arrives on Fight Island in Abu Dhabi as an underdog – but he will challenge for the title in front of his two biggest supporters.