Back in December, in the midst of lockdown, Julianne Moore did not have the 60th birthday she might have imagined: “It was just dinner with my family – it wasn’t a blow-out or anything. I was thankful that we were able to be together.”

She has gone through all the lockdown clichés in the past year: adopting a puppy (a labrador cross called Hope), baking, trying to learn French (“I’d download an app, then I wouldn’t look at it”). Her 19-year-old daughter, Liv, was also grounded at the family home: “Poor kid, she missed graduation and everything.” 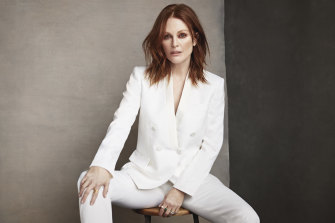 “It’s hard to talk about grief. It’s for ever, that’s the thing. It is like this hole, and as the years go by more stuff piles up, so it is not as accessible. But still it is always there, and you also have to be grateful for it.” Credit:Richard Phibbs/ Trunk Archive/Snapper Images.

There have also been the obligatory online yoga classes – and when we talk (over Zoom) she is sitting on the floor of the designated yoga room in her home in New York, wearing black leggings and a grey hooded sweatshirt, make-up minimal. “I try to do yoga four to five times a week,” she says.

“It has honestly been the thing that has saved me this past year.” Julianne is friendly and gentle, showing genuine delight when my nine-year-old daughter barges in to our meeting: “Who’s this?!” And she has her own visitors in the form of Hope and her older dog, Milly. “They’re good girls, but they don’t like to be alone,” she says, settling them on her yoga mat, where they loll for the rest of the interview.

She is also an extraordinarily accomplished actor, having made more than 70 films and winning awards that include an Oscar, two Golden Globes and a Bafta. There have been blockbusters, indie films, comedies and heartbreaking period dramas, but rarely any duds. She has a fabulous career, a hot husband, great hair and homes in New York and Long Island. So, what’s her secret?

“I have been so lucky, I really have,” she says. “As a young person, I was hard-working, laser-focused. I was persistent and consistent, always prepared for an audition, always on time. And I was working really well.

Julianne has been married for 17 years to film director Bart Freundlich – they met in 1996, when he directed her in his film The Myth of Fingerprints – and as well as Liv, they also have a son, Caleb, 23, who is in his final year at New York University.

Julianne made an active choice to provide her children with a more geographically stable upbringing than her own. Her father was a helicopter pilot, a paratrooper and latterly a military judge, and her mother was a psychologist; the family moved from military base to military base, ending up in Germany, and she attended nine different schools.

“I don’t regret how I grew up – it was very interesting,” she says. “But I don’t think it was ideal. I wanted my children to have a sense of identity based around being in one place.”

One of her favourite childhood memories is of her mother taking her to the library once a week, whatever city they were in. She has a deep and long-standing love of literature as a result, and her next big role is about books and the power of imagination.

Lisey’s Story, an eight-part series for Apple TV based on a novel by Stephen King, is about a woman (Julianne) grieving the death of her author husband (Clive Owen). “Because it’s Stephen King, there is a horror element, a stalker element, a thriller element. But my first attraction was to the story about a mature relationship, about what happens in a marriage. So often our narratives are, ‘Am I going to meet somebody? Am I going to meet somebody? Oh, I met somebody. The end.’ Any of us who has been married knows the introduction story is usually the least interesting part.”

“My first attraction was to the story about a mature relationship, about what happens in a marriage. Any of us who has been married knows the introduction story is usually the least interesting part.”

Lisey’s Story is also about loss, and the wildness and creativity of grief, things Julianne has also experienced. Her mother, Anne, to whom she was incredibly close, died suddenly in 2009 of an embolism, aged 68. Anne came to the US from Scotland when she was 10, marrying at 19 and having her daughter soon after; she instilled in Julianne a strong sense that she wasn’t just American, she had another heritage, too. After her mother’s death, Julianne took dual American-UK citizenship to honour her. 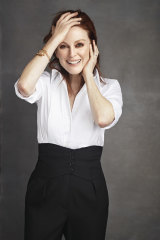 “I’m not that good; I like wine. I try to stick to things that make me happy.” Credit:Richard Phibbs/Trunk Archive/Snapper Images.

I ask if she still carries her mother with her. “Oh yeah, I can’t … I am going to start crying,” she says, her eyes welling before she composes herself. “It’s hard to talk about grief. It’s for ever, that’s the thing. It is like this hole, and as the years go by more stuff piles up, so it is not as accessible. But still it is always there, and you also have to be grateful for it.”

Julianne’s parents encouraged their children (she has a younger brother and sister) in their ambitions. And though they hadn’t anticipated that their clever eldest daughter would want to become an actor, “they thought I had the right to try. They paid for my college education, which was extraordinary, as they were not wealthy people.”

After studying theatre at Boston University, she moved to New York, working as a waitress while auditioning. Her break came with Robert Altman’s Short Cuts in 1993, and she confirmed her talent in films such as The Lost World: Jurassic Park and Boogie Nights.

One of her most notable roles was as the gloriously sozzled and gorgeously attired Charlotte in Tom Ford’s 2009 film, A Single Man. Ford wrote the part especially for Julianne, who found a new fashion fan base via the role. She has since walked in a fashion show for Chanel, is frequently on the front row at Louis Vuitton, and recently appeared in a show film for Saint Laurent.

However, lockdown has provided Julianne with an opportunity to streamline her wardrobe: “I got rid of so many clothes. I really want to be more thoughtful about consumption.”

Of course there were some pieces she didn’t have the heart to discard, such as her Chanel gowns. “It was such a privilege to know him [Karl Lagerfeld] and have things that he made for me – that was really extraordinary.”

As well as being an actor, Julianne is also an author of nine children’s books and is politically active (she’s a Democrat), her Instagram toggling between pictures of her children and political memes. A hot issue in acting now is ageism, and she gets frustrated with the narratives around it – “It seems so silly to talk about it as something negative when it is a privilege to continue to age” – but she doesn’t mind me saying that she hardly looks 60.

“My mother has a lot to do with it because she wouldn’t let us go in the sun. She couldn’t be in the sun and I look just like her. I wear a sunscreen on my face every day and a hat, too.”

She likes high-end facials (micro-needling and radio frequency) and a healthy diet (fish and lots of vegetables), but she is no Gwyneth Paltrow. “I’m not that good; I like wine. I try to stick to things that make me happy.”

The dogs are getting restless and it is time for us to go. Two days after our interview, on Mother’s Day, Julianne posts a picture of herself wearing her mother’s locket: a well-loved, slightly battered, beautiful gold heart.

This article appears in Sunday Life magazine within the Sun-Herald and the Sunday Age on sale June 20. To read more from Sunday Life, visit The Sydney Morning Herald and The Age.

Make the most of your health, relationships, fitness and nutrition with our Live Well newsletter. Get it in your inbox every Monday.