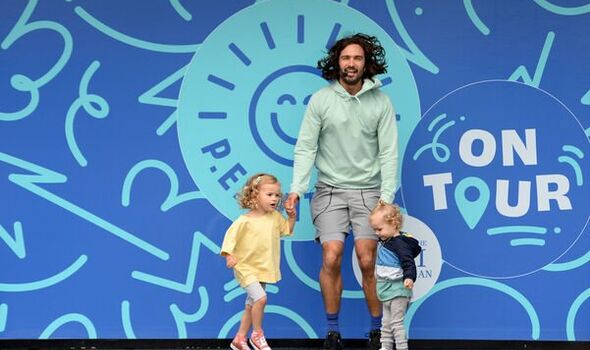 The Body Coach wants families to learn how to talk about mental health, something he could not do as a child growing up in a house where his dad was a drug addict and his mum had OCD.

The wellbeing guru and chef, 36, particularly wants to educate young boys who suddenly “stop crying” and instead bury their feelings, which can lead to suicide and depression later in life.

He said his troubled upbringing has also made him determined to be a kinder and calmer parent to his children with wife Rosie Jones, 31.

The couple have a young daughter Indie, three, and son Marley, two, while their third child is expected in September.

Joe explores growing up in a difficult household in his upcoming documentary Joe Wicks: Facing My Childhood, in which he explains how he compartmentalised his emotions and made exercise his therapy.

He made the film after the feedback he got from his hit “PE With Joe” online videos – aimed at helping children stay active during the pandemic – revealed “anxiety, depression and mental health issues were at an all-time high”.

Joe says if it gets one family talking it will be worthwhile.

He said: “This documentary through my own journey, through my family’s story, can shine a light and get people to think, ‘You know what, I can find help, I can put my hand up and say I am struggling’.”

“At the end of it, you can come through it and repair these relationships that you think are so damaged, you can have a better home life, your family will be happier.”

His documentary highlights that three million children suffer in silence when a parent or carer has mental health issues.

He said: “Children absorb nearly everything. The need for them to be communicated with can be seen from my childhood.

“It was the stigma, we were not allowed to talk about it, to openly discuss my dad’s addiction or my mum’s illness. I think children need to have that vent and get to talk.”

“I was so disruptive and so hyperactive, I was just trouble as a kid.”

The only ways through, Joe found, were either talking about it or improving his fitness, saying: “I exercised and pushed my body to the extremes because I needed to release all that anger, frustration and anxiety that I had.”

“It made me want to be a kind, calm but also patient parent, to try and be stable… and be there for my kids,” Joe explains.

“Because my dad was not there and it was so upsetting – his irresponsibility.”

He plans to be open with his little ones about his childhood, explaining: “I want them to know our journey, our story.”

“There is no shame and I want them to appreciate the life we have got, we live a very different life to the one I had as a kid.”

Joe has since repaired his relationship with his own dad, saying: “We always have been a close family, just the drugs got in the way.”

“Now the drugs are not there, we can have a much closer bond.”

In future documentaries, Joe said he would like to explore other mental health issues raised by his online followers, such as sleep deprivation, phone addiction and eating disorders.