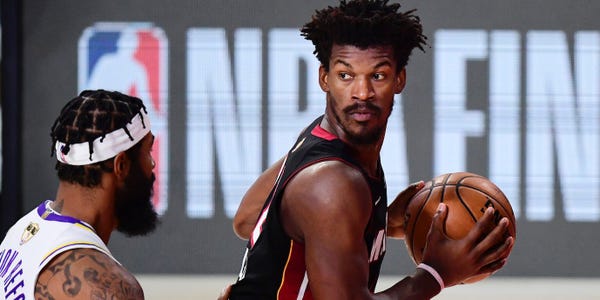 After watching Jimmy Butler drop a 40-point triple-double in Game 3 of the NBA Finals, the Los Angeles Lakers changed their defensive scheme in Game 4.

The Lakers had the 7-foot Anthony Davis defend Butler throughout the night. Davis' length smothered Butler, and if Butler called for a screen to hunt a mismatch, the Lakers only switched if it meant LeBron James or Markieff Morris were going to defend him — nobody smaller or slower.

Butler still finished with 20 points on 8-fo-17 shooting, with 11 rebounds, and 9 assists, but it wasn't the dominant performance he had in Game 3. Butler shot 5-of-5 from the field to begin Game 4 but shot 4-of-13 the rest of the way.

The Lakers also made another simple adjustment that cramped the Heat's offense: they dared Butler to shoot from the outside.

Butler has never been an elite three-point shooter, but he's been capable for most of his career.

Butler's attempts dwindled toward the end of last season with the Philadelphia 76ers. In 2019-20, upon joining the Heat, Butler essentially removed the shot from his arsenal. Over the 58 games of the 2019-20 season (before the suspension for the pandemic), Butler shot just 24% on 2.1 three-point attempts per game. Furthermore, as the season went on, he took fewer and fewer attempts:

From January 1-March 12, Butler went just 5-of-30 from downtown, a startlingly low number for a player who had always incorporated it into his game.

Wing players can be effective without three-pointers, but they can still be harmful to a team's offense. Butler's reluctance to shoot threes, even upon entering the bubble, meant sometimes turning down a good, open shot for a play that never materialized:

The Lakers invited Butler to shoot in Game 4, and he rarely did

Regardless of where Butler was on the floor or the offensive action, Lakers defenders gave Butler a healthy amount of space to shoot.

Butler did attempt three three-pointers in Game 4, but one was an end-of-quarter heave.

Throughout the game, ESPN analyst Jeff Van Gundy harped on Butler to attempt the open jumpers the Lakers granted him.

At times, Butler attempted to drive into the space, only to be meet defenders in the paint.

(Yes, this drive still ended with a positive result, since Bam Adebayo got the offensive rebound, but it's not exactly sustainable offense, as the Heat have been a poor-to-average offensive rebounding team this season).

The Lakers went far under screens, giving Butler the kind of space that typically spells death in this era of NBA offense.

Imagine, for instance, giving Stephen Curry, James Harden, or Damian Lillard this type of space on a screen.

Butler took just one in-rhythm three off the dribble — a wide-open corner three, which he missed. The Lakers got the rebound, and LeBron James found Kentavious Caldwell-Pope in transition for a corner three, a huge momentum swing.

It's a safe bet that the Heat would live with that type of miss late in the game.

Butler should look across the court for the remedy

What makes Butler a unique star is his desire to fit in and not dominate the ball offensively. However, with the Heat down 3-1 in the series and still missing Goran Dragic, they need transcendent shooting performances like they got in Game 3 from Butler.

If Butler is looking for inspiration to take those deep shots, he can simply look to LeBron James.

In Game 7 of the 2013 Finals, the San Antonio Spurs gave James the same treatment the Lakers are currently giving Butler, daring him to shoot and going under screens. James was a fine shooter then, but it wasn't his strength, and the Spurs wanted to wall off the paint.

James began launching from deep and made the Spurs pay.

Toronto Raptors head coach Nick Nurse, the 2019-20 Coach of the Year, joined ESPN Zach Lowe's podcast "The Lowe Post" after Game 4 and offered some solutions to get Butler taking advantage of the defensive scheme.

"My first thing is, he's gotta believe he can just turn that corner and take the three-ball," Nurse said. "There's some chances to shoot 33-35% on those and then collect a few of the misses to raise that percentage up a little bit and get yourself in a high [points per possession] scenario."

Nurse also said if the Lakers continue going under screens, Butler could beat his defender to the other side if he drives quickly enough.

And if Butler is more comfortable from the deep two or midrange spots, Nurse said the Heat could set multiple screens to get Butler closer to the basket.

This isn't asking a non-shooter to launch deep jump shots suddenly; Butler has proven that he is capable.