A preview for next season also teases the end of Angelina's marriage.

This season of “Jersey Shore Family Vacation” went out with a bang … as well as an investigation into whether Angelina Pivarnick and her husband did just that.

While things between Angelina and Chris Larangeria were on the verge of divorce before the cast took a trip to the Florida Keys, the two claimed they had sex the night before the getaway. That comment was immediately met with suspicion from their costars, who seriously doubted the two had been intimate.

In Thursday’s finale, they finally found out whether Chris and Angelina were telling the truth after Pauly D — who had to leave early to go on tour — set up a lie detector test for the entire crew. Larangeria was clearly not thrilled about the idea, saying in a confessional that it was killing his “vibe” to be put on the spot.

Mike “The Situation” Sorrentino went first, admitting his hair color wasn’t natural … Vinny Guadagnino then copped to “shaving the backdoor” and denied ever having a crush on Angelina. That last answer, according to the man conducting the test, was “inconclusive.”

Deena Nicole Cortese, meanwhile, revealed she was ticked production kept showing old footage of flashing Sitch from one one of the show’s earlier seasons on the show … and shared that her husband Chris is “7+ inches.”

When Larangeria was up, he was asked whether he’d ever killed anyone. Chris passed on the question, which only raised eyebrows more. Then, finally, the question everyone was waiting for — “Did you have sex with your wife before this vacation?” He said he had and it was deemed a true response.

Angelina confirmed she regretted leaving the show the first time, denied having a crush on Vinny — an answer which was also marked “inconclusive” — and said she loved her husband. That last answer was deemed true.

Other revelations included Jenni admitting she had to “ice her vagina” after having sex with Zack Carpinello the first time, Lauren Sorrentino copping to being “boujee” and Snooki saying everyone overreacted at Angelina’s wedding. 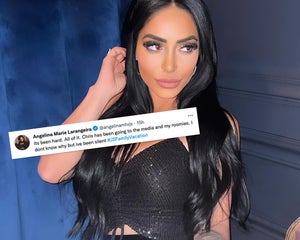 While everyone now believed Angelina and her husband got down, Pivarnick went into this trip giving herself an ultimatum to decide whether or not she’d file for divorce by the end of it. It was something she was still struggling with going into the last day of the vacation.

“What I went through with him, I’m like should I stay with him, should I not?” she said to Snooki, after their therapy session last week. “But he’s been amazing. Then we’ll go home and it’s different. It’s hard because you can only change yourself, you can’t change anyone else.”

“So this deadline that I’ve set is like kind of biting me in the ass right now,” she continued in a confessional. “The breakthrough Chris and I had last night was actually pretty good. I want to be positive here and I’m seeing how this goes now.”

“I think this was good for Chris and I. We got to be a team, we had each other’s backs, but I need Chris like that all the time. I’m starting to realize some of the reasons why I fell in love with Chris in  the first place,” she said after the lie detector test. “I remember back then, we were on each other’s team, we were very good together. Hopefully if it stays this way, then we’ll make it.” 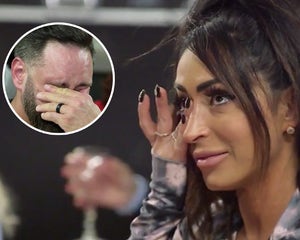 Though she said they “were not in a good place at all” before the trip, she thought the getaway was good for them in the end. “I don’t know what the future’s gonna hold, but hopefully we’ll be on the track of goodness from here,” she added at the end of the hour.

Of course, we all know they didn’t stay on track, as Chris filed for divorce in January 2022. A preview for the next season of “Jersey Shore” also highlighted their split, as Angelina was seen in her empty home exclaiming, “Are you kidding me? A——. You take a TV that’s like 40 inches, bro!”

She’s also seen not wearing her ring, telling the other girls, “I thought things were going to change and they didn’t change. And I’m like, this is not normal.” 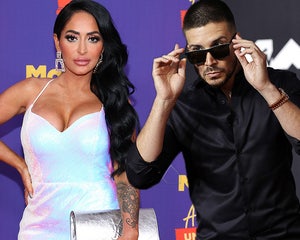