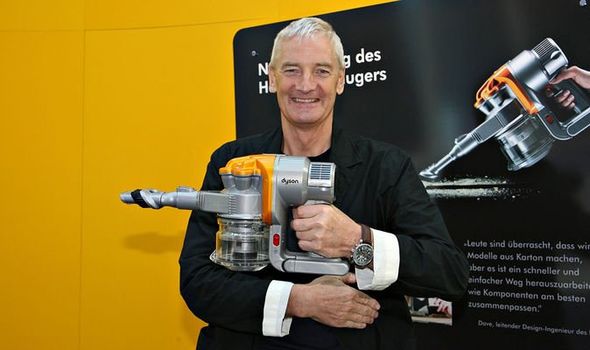 The country was mired in a deep and ugly recession in early 1992 when I began looking for money to start manufacturing what would eventually become my best-selling DC01 vacuum cleaner. After a number of false starts, not least my Ballbarrow which had captured half the garden wheelbarrow market yet barely made me a penny, I decided to make my own bagless, dual cyclone vacuum cleaner.

This, as you might expect, was not especially easy. When I started out on my own, factories in Britain were only available on 21-year leases when inflation and interest rates were very high. Luckily, I had an old 18th century coach house at home to serve as a workshop.

It was smelly and rotten at first but, beginning with a wooden bench fitted with a vice, it quickly began to look and act the part.

I bought a set of antique sheet-metal rollers to roll prototype cyclones out of brass before soldering or riveting these together. I could make a cyclone a day, not always a completely new one, sometimes a modification.

In the late Seventies, as an engineer and entrepreneur with a young family, I had bought my first modern vacuum cleaner. Hoover had a new model that looked like a flying saucer and was said to be the world’s most powerful.

But when I set to work with it one Saturday, it screamed away while appearing to have very little suction. Realising the bag must be full, I opened it up, tipped the contents into the dustbin and sealed the end. Back it went into the flying saucer. Still no suction.

I realised a vacuum-cleaner bag is not just a depository for the dust, it also acts as a filter, allowing air to pass through its pores. The “bag full” indicator does not indicate a full bag at all ‑ it means the pores are clogged. As an engineer, I found this interesting. As a consumer, I felt cheated, even angry. This anger festered for several months.

The idea for a cyclonic, bagless vacuum-cleaner had been in my head since welding up the giant metal cyclone machine to clean the air of paint particles at our Ballbarrow factory before I had been ousted by fellow shareholders in 1979 after  mistakenly signing over the patent of my invention to the company rather than myself.

For the following 15 years I lived in debt. This might not sound encouraging to young inventors, yet if you believe you can achieve something then you have to give the project 100 percent of your creative energy.

You need determination, patience and willpower. And here was a field -the vacuum cleaner industry ‑ where there had been no innovation for years, so the market ought to be ripe for something new.

Because houses need cleaning throughout the year, a vacuum cleaner is not a seasonal product. It is also recession-proof.

Every household needs one. In any case, I’d used one since childhood and knew from experience that there had to be a better vacuum cleaner. So I buried myself in my own world of prototyping.

It’s a part of the Dyson story that I made 5,127 prototypes to get to a model I could set about licensing. This is indeed the exact number. Testing and making just one change after another was time-consuming.

However frustrating, I refused to be defeated by failure.

All of the 5,126 prototypes I rejected ‑ 5,126 so-called failures ‑ were part of the process of discovery and improvement before getting it right on the 5,127th time. Failure, as I had already begun to learn, is important.

Of course, if, like me, you’re lucky to have someone willing to back you up day to day as my wife Deirdre did, you are far less likely to give up. It was also very much a family affair.

The children came and worked alongside me. Among other things, we built skateboard ramps, vacuum-forming machines and desk lamps.

Making things was enormously pleasurable as well as necessary because we couldn’t afford them otherwise.

Jake made a sledge he could sit inside with front skis that steered. Sam made an ironing board that folded very simply and easily without the need for annoying catches. He used gas struts designed to hold up car boot lids. Emily made a diving board for the swimming pool I had built in the garden.

By late 1982, having designed and built my vacuum, I set about patenting the new features and the cyclonic inventions. This is most important, though patents, devised under Henry IV with little change since, provide scant protection for the inventor.

Nevertheless, it was a prerequisite for my next step, which was to try to license the design with all the major British, European and American vacuum cleaner manufacturers.

I went to see Electrolux, Hotpoint, Miele, Siemens, Bosch, AEG, Philips ‑ the lot ‑ and was rejected by everyone. Although frustrating, I learned they were more interested in defending the vacuum-cleaner bag market, at the time worth more than $500million in Europe alone.

Here, though, was an opportunity. Might consumers be persuaded to stop spending so much on replacement bags, which, by the way, are made of spun plastic and are not biodegradable, and opt for a bagless vacuum cleaner that offered constant suction instead? If so, I might stand a chance against these established companies.

Hoover later admitted they regretted not buying my invention because they would have “put it on the shelf”, ensuring that it never saw the light of day. Charming.

Strange as it might seem, and although money was a constant worry, life didn’t seem as tough as it might have been. Deirdre and I had a handsome house, even if it did need quite a bit of work, our three lovely children, aged nine down to one, and the family retriever.

We grew our own vegetables and had a large garden that the children made good use of. Deirdre made clothes, ran art classes and sold her paintings.

We couldn’t afford glamorous holidays, and yet in many ways it was an idyllic time. I knew I had various degrees of perseverance, determination, grit and what you might call sheer bloody-mindedness, yet these qualities ‑ I like to think they are qualities ‑ were underpinned by a kind of naïve intelligence, by which I mean following your own star along a path where you stop to question both yourself and expert opinion.

A willingness to keep questioning the validity of an idea, or indeed a product, might sound naïve in a world of slick global business, but it worked for me and Dyson as I think it can and will for inventors, engineers, designers and makers of the future.

I had been warned, for example, that at £200, or at least three times as expensive as most other vacuum cleaners, the DC01 would prove to be too expensive. Yet it sold well.

The sheer cost of producing it, and as a result the high price tag, was mitigated by the fact customers recognised its technological advantage over existing designs.

I was also told no one would want to see dust sucked up inside a transparent container.

However, I enjoyed seeing the dirt my machine had extracted in all its gory detail, so we ignored the market research. Curiously, this is exactly what customers did like to see. They were fascinated by the sight of just how much dirt they had successfully cleaned up. But all this was to come.

First I had to get the manufacturing off the ground while keeping control of my invention. With no prospect of success, I went to the Corn Street branch of Lloyds in Bristol.

It was taking the ultimate risk. With three young children, we could end up evicted from our home, even more so when Mike upped the loan to £600,000.

We stood to lose everything we had if we failed. However, it was our last chance to make our invention work, to show faith in what we had done.

It was extraordinary Deirdre went along with this last roll of the dice.

The great thing is that now we had our own money ‑ well, the bank’s money ‑ and no need for investors, who I didn’t want anyway. The tricky thing, though, is that we set up Dyson Appliances Ltd just as the recession hit.

The British economy was pretty rocky for the next two years. But we moved very quickly to get the vacuum cleaner into production and, by July 1993, we had our first factory in Chippenham.

The building had 29 roller doors and was icy cold in winter. When we needed more space, we bought a huge second-hand tent the size of a car park. Local cab drivers called it the “Madonna tent” because of its twin peaks. On cold days it sweated inside. Hired containers provided further space.

This was a big and uncertain moment for me, and yet we began production and within 18 months the DC01 was the biggest seller in the UK market.

Fifteen years of invention, frustration and determination were beginning to pay off. I was now a proper manufacturer, thrilling to the sight and sound of a production line in full swing. I found it impressive, staggering even. I still do.

By 1995, just two years after our launch, Dyson was turning a good profit and expanding rapidly. We had paid off the enormous bank loan and were able to tear up the grey bank guarantee forms. Deirdre and I were enormously relieved. We could keep our home and pay off the mortgage. And our longstanding overdraft – which had reached the staggering amount of £650,000 and within 18 months the DC01 was the biggest seller in the UK market. was finally a thing of the past.

At the same time, we were caught up in the most exciting adventure of our life.

James Dyson is donating all his proceeds from the book to charities chosen by Dyson People.

For archive imagery and film from his life, visit Dyson.com/JamesDyson