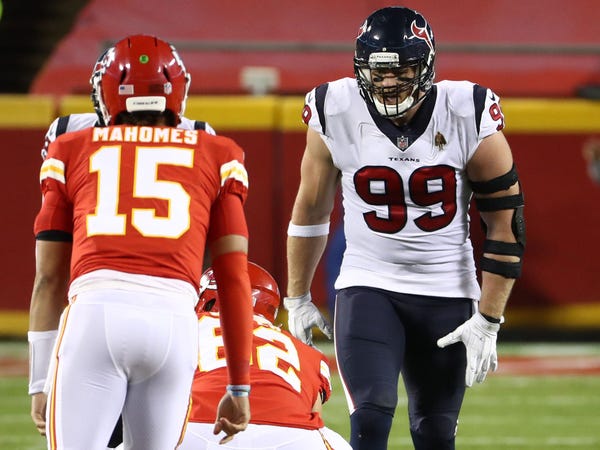 Houston Texans defensive end J.J. Watt told reporters he was confused with the boos from fans at Arrowhead Stadium on Thursday night during what should have been a moment of unity.

Ahead of the Texans game against the Kansas City Chiefs, players on both teams met in the middle of the field for a moment of silence that the stadium PA announcer said was "dedicated to the ongoing fight for equality."

As the players stood arm-in-arm, boos could be heard from the crowd.

After the game, Watt said he didn't understand what fans were booing.

"The booing was unfortunate during that moment. I don't fully understand that," Watt said. "There was no flag involved, there was nothing involved with that besides two teams coming together to show unity."

Watt went on to explain his appreciation for how a locker room could bring people from different worlds together, and for what he's learned as the Texans discuss the social justice issues that have dominated the sports world in recent months.

"A locker room is a very diverse place," Watt said. "There's people from all different backgrounds, there's people from all different situations. I've been very fortunate to be a part of a lot of locker rooms throughout my life. In this locker room we've had more conversations than we've ever had about topics that may be uncomfortable to talk about. Maybe people have never opened up these conversations.

"For me, I've learned a lot. I've been educated a lot. It's really been a growing experience for our team, and I think we've come a lot closer because of it."

Watt said that the Texans decided as a team that they would remain in the locker room as the national anthem played before their game against the Chiefs on Thursday night, and they are not alone.

On Thursday night, the Miami Dolphins announced that they would not take the field for the anthem for their Sunday game against the New England Patriots.

"No more fluff and empty gestures," the Dolphins told the league in a video.