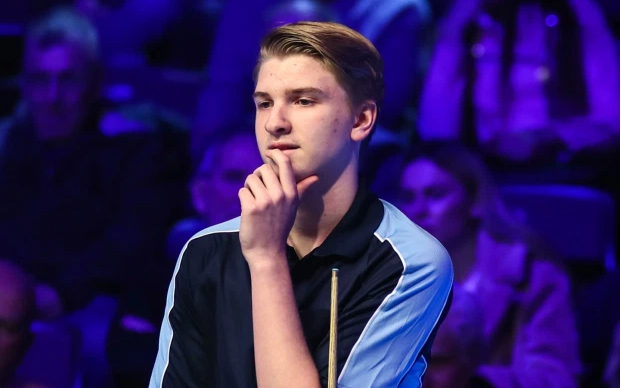 Ukrainian snooker star Iulian Boiko has explained how his family have fled their country, while his friends have been forced to spend most of their time underground during the Russian invasion.

The 16-year-old – who became the youngest professional ever in 2020 – is trying to focus on his snooker career in the UK, and picked up an impressive win over Liam Davies at the Welsh Open this week, but his concentration is understandably on the horrors in his home country.

Now back in Sheffield after losing out to Mark Allen in the second round in Newport, Boiko explains how his family have left Ukraine, but his friends have been forced underground to try and keep safe.

‘The situation is terrifying, there is full scale war going on,’ Boiko told ITV’s Good Morning Britain. ‘Attacks, explosions, missiles so it’s really terrifying because I’m really worried for all the people who are there, all the Ukrainians, it’s really bad.

‘They [family] are all safe. At the time of invasion fortunately my father and two of my brothers were out of the country. Mum had to flee to come to Poland and for now they’re safe.

‘My parents continue doing their job from Poland and also they’re helping people find shelters and places to stay so I’m really proud of them.

‘I think this is what unites our country, that all of the people are helping each other at the moment.

‘I have a lot of friends and basically all of my team are like family to me, they’re all in Ukraine. I try to talk to them as much as I can, that’s why it takes a little bit of focus and concentration out of snooker because you realise that’s not as important as the people’s peace and lives.

‘They have to stay underground most of the time. Everybody’s looking for safe places to stay, to survive all those explosions and attacks from Russia.’

Boiko has some big snooker matches coming up as he looks to retain his tour card for next season, playing in the upcoming Turkish Masters, Gibraltar Open and then the World Championship qualifiers.

However, snooker is a tough ask for him at the moment, with his mind on the horrific violence in Ukraine.

‘It is very difficult to concentrate with the terrifying things that are going on at home – and I am spending most of the days on the phone to family and friends,’ Boiko told reporters after his win over Davies.

‘I have been very worried about them, they are mostly in Kyiv, but also other parts of Ukraine that are under attack. Fortunately my family are all okay, I am here with my coach and a friend.’

Boiko told The Sportsman earlier in the week about how WPBSA chairman Jason Ferguson has helped other Ukrainian snooker players stay in the UK after they came over for the recent WSF Open.

‘There have been other Ukrainian players over here for the big recent World Snooker Federation amateur championships,’ said Boiko.

‘Some went back to neighbouring countries including Matvei Lagodzinschii who is only 11, but some have stayed in the UK and Jason Ferguson at the WPBSA has helped them get places to live and practice, we are very thankful to him.

‘They include Anton Kazakov who will be on tour next season, and the support from snooker has been incredible.

‘I am based in Sheffield during the season and practice at the Victoria Academy – and I will be here until the World Championships in April at least in the current situation.

‘But I have not seen my family for a long time now, and although I cannot go home to Ukraine, maybe they can get to Turkey for the event next week, or somehow get over to the UK.’