Injecting MEN with the female hormone progesterone could reduce the severity of their COVID-19, study claims

Injection with the female sex hormone progesterone could improve outcomes for men hospitalised with severe COVID-19 infections, a study has concluded.

The finding by researchers from California follows multiple reports that men are at a higher risk of severe illness and death from coronavirus than women.

Progesterone has certain anti-inflammatory properties and thus, the team said, may be able to dampen the often fatal immune responses called ‘cytokine storms’. 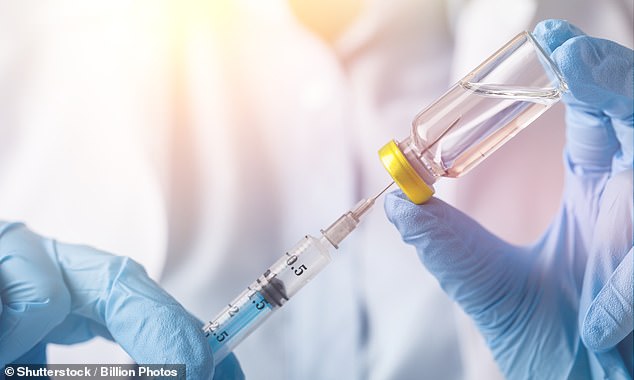 Injection with the female hormone progesterone could improve outcomes for men hospitalised with severe COVID-19 infections, a study has concluded (stock image)

The research was undertaken by pulmonologist Sara Ghandehari of the Cedars-Sinai hospital in Los Angeles and her colleagues.

‘As an ICU doctor, I was struck by the gender disparity among COVID-19 patients who were very sick, remained in the hospital and needed ventilators,’ she said.

Progesterone is produced in both men and women’s bodies, although the latter produce considerably more of the hormone during their reproductive years.

Experts have also noted that premenopausal women tend to experience less severe cases of COVID-19 than their postmenopausal counterparts.

Premenopausal women tend to have higher progesterone levels while such tends to decrease to lower levels post-menopause.

In their clinical trial, which was undertaken from April–August last year, the researchers recruited 40 male patients who had been hospitalised with moderate to severe COVID-19 and randomly divided them into two groups.

One group acted as a control sample, for comparison, and received only the standard medical care given at that time for the disease.

The experimental group, meanwhile, also received 100 milligram injections of progesterone twice daily for five days during the time they were hospitalised.

All the patients were assessed by the team daily for either 15 days or until they were discharged from hospital.

On the seventh day, each patient was ranked on a standard seven-point scale of clinical status, which ranged from 7 (‘not hospitalized, no limitations on activities’) though to 1 (‘death’). 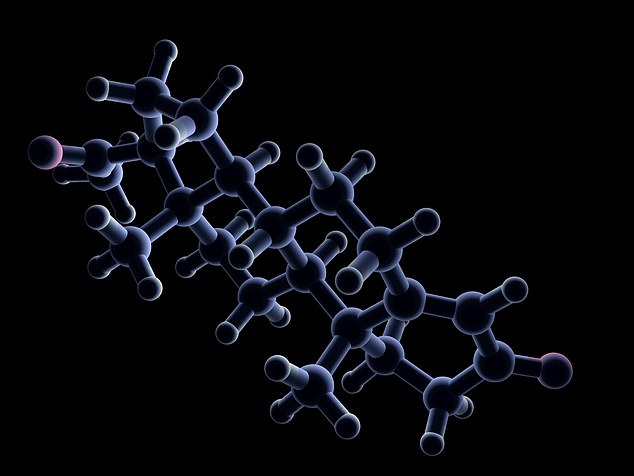 Progesterone (depicted) has anti-inflammatory properties and thus, the team said, may be able to dampen the often fatal immune responses called ‘cytokine storms’ seen with COVID-19

The researchers found that, compared with the control group, patients who received the progesterone treatments scored a median of 1.5 points higher on the scale.

The experimental group also had fewer days of hospitalisation overall and a lower need for supplemental oxygen and mechanical ventilation, although the team said the differences between the groups in these areas was not  statistically significant.

No serious adverse effects were observed as a result of the progesterone injections. Two patients did die during the 15-day study period — one from each of the two groups — but such were unrelated to the experiment treatments, the team said.

‘While our findings are encouraging for the potential of using progesterone to treat men with COVID-19, our study had significant limitations,’ cautioned Dr Ghandehari.

Firstly, she explained, the sample size was relatively small and was primarily made up of White, Hispanic and obese individuals with a moderate burden of other conditions, which serve to increase the risk of worse outcomes.

Furthermore, while the trial was randomised and featured a control group, it was also unblinded — meaning that the research team, physicians and patients all knew who had received the experimental treatment.

‘Further research is necessary in larger, more heterogeneous populations, including postmenopausal women and at other treatment centres,’ Dr Ghandehari added.

This, she continued, will allow the team ‘to establish the degree of clinical efficacy and to assess any other potential safety concerns of this treatment approach.’

The full findings of the study were published in the journal Chest.

Progesterone is a hormone that is secreted by the corpus luteum, a temporary endocrine gland that the female body produces after ovulation.

It prepares the body for the possibility of pregnancy after ovulation.

It causes a thickening of the uterus lining to allow for an egg to embed into the wall.

After a woman’s cycle is completed and they are not pregnant the gland breaks down and the menstrual cycle begins.

If a woman does become pregnant the chemical continues to be produced to maintain the layer and provide oxygen to the developing fetus.

Said to be ‘oestrogen’s cousin’ or the ‘relaxing hormone’, is thought to help to maintain pregnancy.

It is not typically prescribed on the NHS in the UK unless a woman has three or more miscarriages in a row.

If progesterone levels are too low with regard to estrogen levels, a woman will experience sleep disturbances, irritability, anxiety, weight gain, breast swelling, breast tenderness, and itching, bloating, sweating, loss of memory, and loss of libido.

Despite its widespread use in pregnancy the hormone has also been shown to promote nerve, blood vessel, and bone tissue repair.

This has therefore brought around applications in tissue regeneration.