NEW DELHI — India’s two biggest biannual fashion weeks divided by geography — in Mumbai and Delhi — are coming together for the first time in 15 years, full circle from where they started as one entity.

The five-day phy-gital fashion event is scheduled to take place from March 16 to 21, with the opening show by Kolkata-based designer Anamika Khanna.

“It is a tripartite agreement,” Sunil Sethi, chairman of the Fashion Design Council of India, which organizes India Fashion Week, told WWD. “With Rise Worldwide and Lakmé Lever and us making the best call for the time.”

This will be the first fashion week in a decade without the involvement of New York-based IMG, which was joint organizer with the IMG Reliance alliance, who worked in partnership with beauty brand Lakmé, a subsidiary of Hindustan Unilever Ltd.

In December, Indian conglomerate Reliance Ltd. bought out IMG to take over its India Lifestyle and Sports segment, strengthening its position in fashion as it aims to become the industry’s biggest player in the country, with more than 12,000 stores owned by Reliance Retail Ventures Ltd., as well as the fast growing e-commerce arm ajio.com.

“Nothing much changes for us in terms of actual working, the team is the same, I remain the same. Our agreement with Lakme continues,” said Jaspreet Chandok, head of Lifestyle Businesses at RISE Worldwide, who has been leading Lakme Fashion Week for the last five years.

Designers have hailed the collaboration as a visionary steps that shows flexibility on both sides. 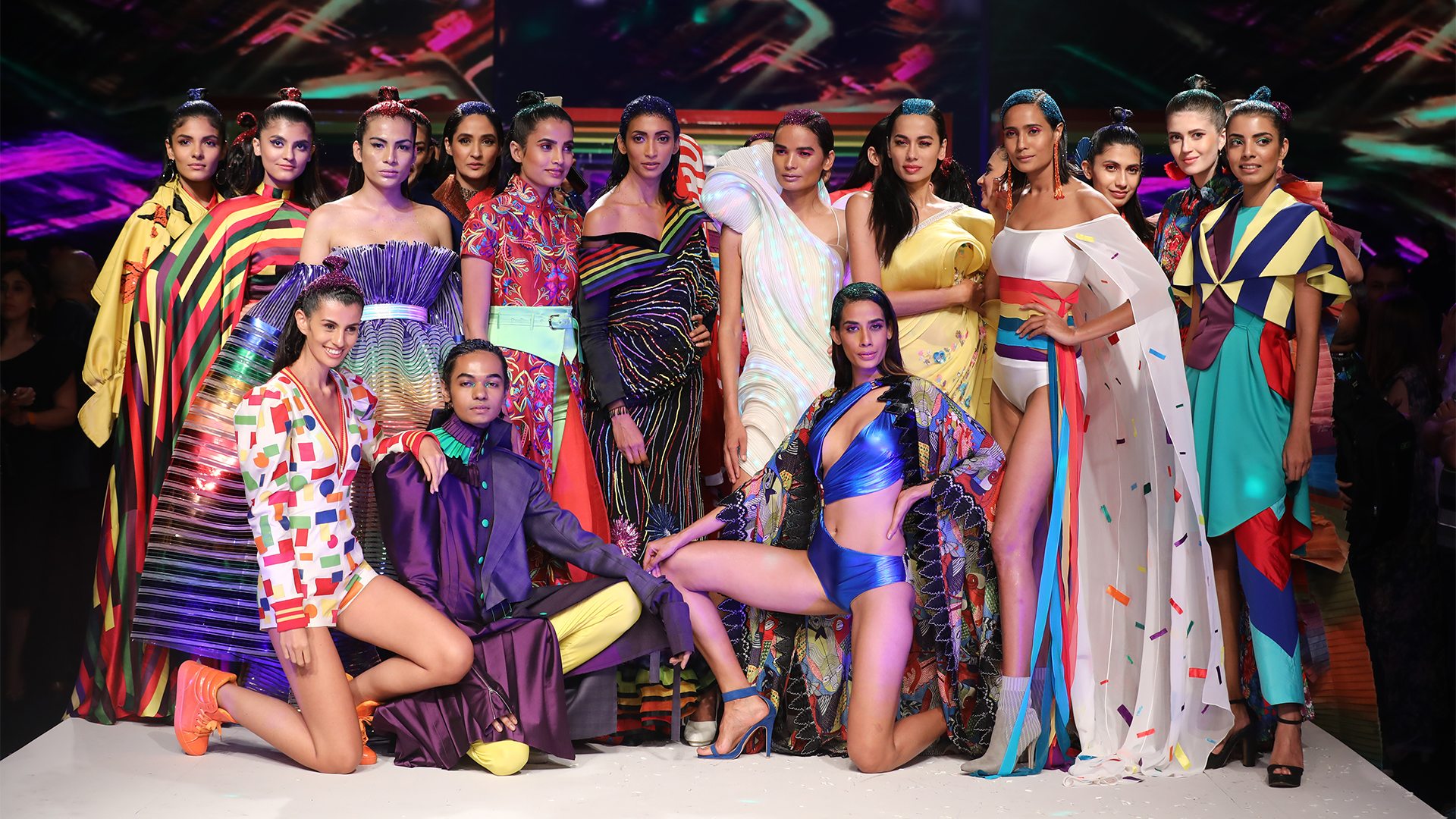 The Rainbow Show at FDCI for spring 2019.

With Lakme Fashion Week following the see-now-buy-now model, and FDCI on the season-ahead international schedule, which one is it going to be?

“FDCI has always worked on the international buying season schedule, and we have stuck to it for 21 years. But while organizing the digital fashion week last season, we broke that sacrosanct rule since the buyers were not coming here, and it gave designers the option to showcase for the domestic market,” Sethi observed.

In separate conversations with WWD, both organizers spoke about the new spirit of camaraderie, overcoming the years of festering rivalry. Unspoken, though, was the clash of egos, and growing calls by designers for a single, united fashion week that creates more strength for buyers.

“I learnt a catchy phrase from America, ‘If it ain’t broke, why fix it.’ But I felt that the time for fixing is when the market is still struggling rather than when everything gets broken. I am a bit old school and I don’t like so many changes, but it is better to embrace change, to join hands and fight the present situation,” Sethi commented. Markets have been down, with sales at less than 60 percent versus last year.

He added that in the first few days of the partnership the benefits were already becoming clear. “Shoots are happening in cooperation, we are learning from each other as well,” he said.

The costs to designers remain the same, at close to half of the physical stores. “The only added charge may be to encourage designers to go into an e-commerce base, at a little more than $100 to be part of the stock room where unsold inventory is offered on the last day of the event to which designers from both fashion weeks are invited to participate,” Sethi said.

Chandok is upbeat about the prospects, too.

“I would say there was a significant amount of competition in the decade before, but in the last five years that I have been here, I wouldn’t look at it is a clash of egos. We’ve had a cordial relationship, we have grown our fashion weeks, and taken them to new heights, independent of what was being done on the other side,” Chandok said.

“I think one plus one will be equal to three. I can’t think of anything that seems like a compromise, at least from our end. All the partners including beauty brand Lakme have come forward with the intent of making it work, so that is half the battle won.”

Shows that promote new talent will continue, as will the sustainability focus day, and individual buyer programs will continue. The finale will continue as Lakme has been driving it, with an up-and-coming designer who has not yet done a finale, to best showcase the new Lakme beauty launch, typically with brand ambassador Kareena Kapoor.

As to whether this will become a permanent arrangement, Chandok said, “Whether it is one event or two events come September/October, the fact of the matter is that the collaborative spirit will only grow stronger. And that in itself will help the industry.”