After a landmark weekend in the business of Baz – with the opening night of Moulin Rouge! The Musical! in Sydney and premieres of his new film Elvis in two states – Baz Luhrmann was philosophical about the polarising reviews that keep following him around. 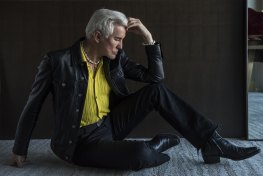 “What happens if I ever get a film where all these critics love it?“: Baz Luhrmann in Sydney.Credit:Steven Siewert

“I’m used to that,” Luhrmann says, referring to the initial negative responses to the Elvis Presley biopic. After the world premiere at the Cannes Film Festival late last month some critics described the film as “utterly deranged” and “toweringly noisy”.

Subsequent reviews have been more positive, but Luhrmann is sanguine about feedback after a directing career that has also included Strictly Ballroom, Romeo + Juliet, Moulin Rouge!, Australia, The Great Gatsby and the Netflix series The Get Down.

“What happens if I ever get a film where all these critics love it? It’ll probably be a dog.”

While admitting he would not mind five-star reviews all the time, Luhrmann recognises that his films cover themes that come out of left field.

“Who wanted a film about ballroom dancing?,” he says. “Nobody. Or Shakespeare or Gatsby or Elvis? All dead things.

“I’m really interested – I don’t know why particularly – in recoding things that were great but have somehow become rusty.”

Elvis, which was entirely shot on the Gold Coast, turns on a star-making performance by Austin Butler as the late, great king of rock and roll.

While it was warmly received at the Sydney premiere at the State Theatre on Sunday, there were fears the film would never get made when Hanks tested positive for COVID-19 just three days before the start of shooting in March 2020. But he returned to the Gold Coast later that year – going through two weeks in hotel quarantine – to resume filming. 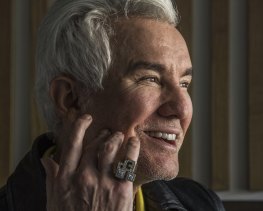 Since delivering Elvis to Hollywood studio Warner Bros, Luhrmann has been zigzagging around the world promoting its release, set for later this month.

His schedule has included the Coachella music festival in California, the Met Gala in New York, and Cannes, followed by screenings in London, the Gold Coast and Sydney. This week he starts a circuit of screenings in 10 American and Canadian cities.

Luhrmann’s hoarse voice shows how hard he has been working to sell Elvis.

“You need to give it your all,” he says. “I’ve made a theatrical film and all that matters to me is that strangers of every kind end up in a dark room communing in a big story.”

Luhrmann mentioned one possible big story for the future at a Vivid Ideas talk on Sunday – a film about the famous New York nightclub Studio 54 – but won’t decide what comes next for some time yet.

Once Elvis opens, he plans to get back to what he has done for every film except Gatsby: head off for an anonymous solo break somewhere unlikely in the world.

“I’ve never woken up one morning going, ‘Oh, I’m going to do that’,” he says. “They all percolate for years. It’s just a question of what’s useful.”

His break – he is hoping it turns out to be more successful than when he went to Kuwait to decompress after one film – will have particular resonance given he is about to turn 60. 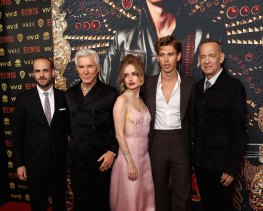 “So I need to have time to work out, ‘What does [my] life need?’ and ‘Can I put something out there that’s useful?’”

Luhrmann, who has been living with his wife, production and costume designer Catherine Martin, and their two teenage children on the Gold Coast, also believes it’s time for the new federal government to push on with becoming a republic.

While happy the Queen has had her platinum jubilee – “she’s a remarkable person, no doubt about it” – he wants a new head of state for his children’s generation.

“I really believe there’s an importance in being a republic,” he says. “Young people want to make a difference but they need a system of self-governance that’s commensurate with the maturity that the country has.”