British promoter Eddie Hearn has a global vision for boxing and Australia is very much a part of it, but with one caveat: “I’m not interested in footballers”.

“They’ve done their job, footballers in boxing,” Hearn said. “There will always be a market for it, just as there is for YouTube boxing. It’s served its purpose because it’s raised awareness of the sport [in Australia]. Paul Gallen has fought some legit heavyweights. Gallen and Sonny Bill Williams is a fight I’d like to make. But I’m not really interested in anything beyond that. I want to legitimately grow the sport in Australia from grassroots to elite level.”

It dips its toe into the Australian market for the first time on Saturday, October 15, with an event headlined by locals Brock Jarvis and Liam Paro in front of 3000 people at the Suncorp Piazza in Brisbane.

The event is one of three in the next eight days that highlights Australian boxing’s long-awaited renaissance.

On Saturday, No Limit Promotions will continue to break new ground by holding a 20-bout event — headed by Nikita Tszyu and Darkon Dryden — at the Newcastle Entertainment Centre. 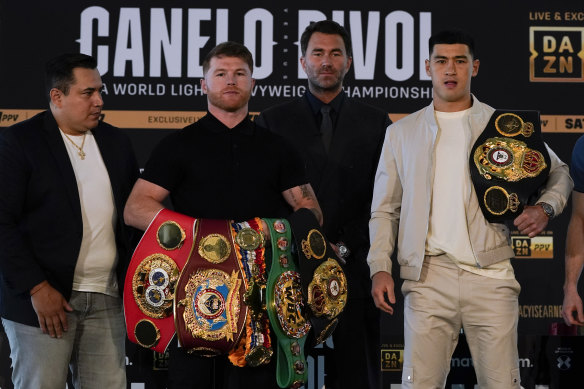 Eddie Hearn poses between Canelo Alvarez and Dmitry Bivol before their title fight in Las Vegas in May.Credit:Getty

On Sunday, October 16, George Kambosos jnr fights American Devin Haney at Rod Laver Arena in their rematch after Haney beat the Sydneysider with a unanimous points decision in July.

Add to that a handful of male and female fighters who are pushing for world titles around the globe, and it’s fair to suggest the sport is humming.

“I don’t want to sound arrogant, but I wouldn’t waste my time working on a territory that didn’t show so much potential,” Hearn said. “There’s a fascination in Australia of, ‘Why are you here?’ I come in peace — although I upset everybody. I don’t like to call myself arrogant but people in the industry think I am. We like to make noise. We like to come with a bang.

“I’m coming here to become the dominant force in Australian boxing, as we do in every market we enter. We have a lot of fractured relationships around the world. As I get older, and the ego simmers down, I’d like to start on friendly terms and hopefully we can keep it that way.”

Hearn wants to become the same global figurehead in boxing as “Dana White is to UFC, Vince McMahon was to WWE” but whether he can crack the fickle Australian market is uncertain.

For years, the sport struggled to gain traction with the likes of Danny Green, Anthony Mundine and Jeff Horn’s upset win over Manny Pacquiao keeping the fires burning.

In many respects, Matt and George Rose at No Limit helped drag boxing back into the mainstream limelight – and mostly by making fights involving rugby league players.

When they paired Gallen with Parramatta prop Junior Paulo in 2016, broadcaster Fox Sports wasn’t interested in televising the bout.

Now Gallen has become a pay-for-view goldmine, even if fighting retired players Justin Hodges and Ben Hannant on the same night earlier this month was a gimmick we can do without. 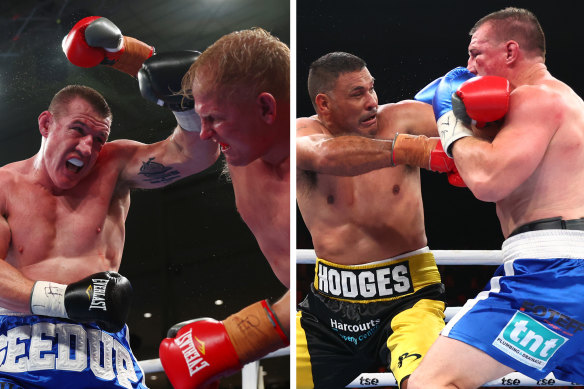 In the ruthless world of boxing, few participants will lavish praise on each other but No Limit has raised the bar well beyond the usual drivel of promoters doling out cheap lines in the press to drive pay-for-view subscriptions.

No Limit sinks time and money into the event itself. They make them big. It’s sold-out events in Newcastle four times. When COVID-19 restrictions forced Tim Tszyu’s bout against Takeshi Inoue last November to be relocated to Qudos Bank Arena, the promoter whipped up 12,000 ticket sales within three weeks.

By design, the Rose boys have targeted new fans instead of rusted-on boxing supporters, using their rugby league talent — namely Latrell Mitchell and Cody Walker — to promote their events.

They’ve also made Australian titles special again, not just another bout on the undercard.

“I think No Limit has done a great job,” Hearn said. “I don’t want to sound arrogant, but I look at what they do in terms of branding, their press conferences, and I think, ‘Wow, you’ve basically imitated us’. But I copied the UFC.”

Earlier this year, Matchroom outbid No Limit to hold the all-Australian IBF bantamweight world title fight between Ebanie Bridges and Shannon O’Connell in Leeds in December.

“The fighters made three times more money because Matt and I were in a genital-measuring contest,” Hearn laughed. “In the end, I thought, ‘Blimey, we spent a lot on this fight’. But I respect No Limit.”

Hearn is talking a big game about his push into Australia.

He shakes his head at how state governments here are prepared to throw millions of dollars at promoters to hold world-class events – “They would never do that in the UK,” he says – and wants a piece of it.

He has said more than once recently that he wants to bring Joshua and Alvarez to Australia — and insists it’s not just talk.

“If we’re talking about making the sport very important to the country, they’re the kind of events we need,” he said. “We can talk about the rise of Australian boxing but there’s still a long way to go.”

MAKING MOUNTAINS OUT OF MOLEHILLS

Few sports can disappear up its own bottom quite like rugby league, but the pearl-clutching that’s followed Penrith’s premiership celebrations really is next level.

The Panthers stand accused of “tarnishing” their grand final victory over Parramatta because of some rather harmless ballyhoo.

If an Indigenous player calls out racist attacks, he’s dismissed as a “snowflake” and told to “harden up”.

If a Panthers player – after 12 hours of heavy drinking and no sleep – offers some throwaway line about Parramatta being our “sons”, or laughs sarcastically about joining the Wests Tigers, it’s apparently a demonstrable lack of grace and class.

If you’re looking for grace and class from a group of footballers still wearing the jumpers they played in the night before, you’re looking in the wrong place. 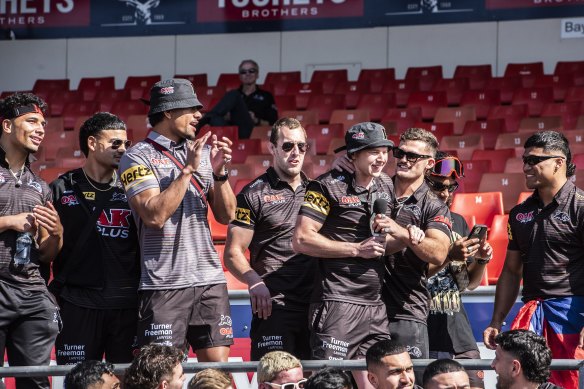 Panthers players address fans at BlueBet Stadium the day after their grand final victory over the Eels.Credit:Steven Siewert

That night, as Dragons players and officials tried to numb themselves at their Leagues club, the phone rung off the hook for chief executive Geoff Carr.

Each time Carr answered, he was greeted by voices he knew, asking “Carry, have you guys scored yet?”

The voices belonged to Langer, Kevin Walters and Chris Johns, all of whom Carr knew in his capacity as Australian team manager.

At the Broncos’ civic reception days after their grand final win, Walters asked the question again: “Have St George scored yet?”

Imagine the pearl-clutching if such shenanigans went down today.

THE QUOTE
“I don’t think there will be any coming back now. They both have lawyers and are looking at what a split will entail, who gets what and what the finances will be.” — An anonymous source tells the New York Post’s Page Six that Tom Brady and Gisele Bündchen are about to divorce. Luckily, he has another six rings to wear on his finger. 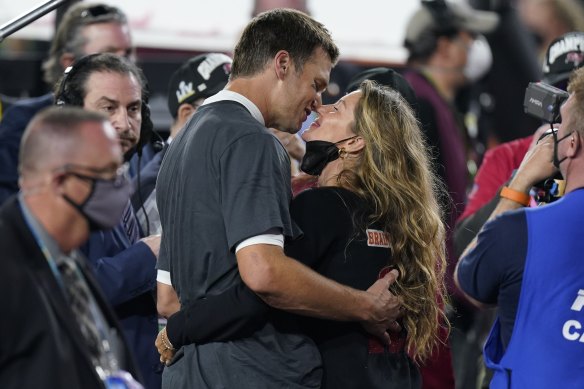 THUMBS UP
Rugby league has a new face and it’s a teenage girl from Newcastle who plays halfback. Jesse Southwell, 17, knocked it out of the park in the NRLW grand final, engineering a 32-12 win over Parramatta. Her inspiration was Andrew Johns and the term “Chocolate Thunda”, a reference from the movie The Cat in the Hat, which she wrote on her wrist.

THUMBS DOWN
As the AFR’s Joe Aston wrote this week: “The appointment of former National Australia Bank boss Andrew Thorburn as the CEO of Essendon Football Club landed like a turd in the punch bowl.” Why the Bombers even considered the disgraced former NAB chief and chairman of a church that reckons homosexuality is “sexual immorality” and compares abortion to the Holocaust was a wise move is anyone’s guess.

It’s a big weekend for … the Sydney Kings, who play their first home match of the season on Friday night against the Brisbane Bullets at Qudos Bank Arena. The defending NBL champs lost MVP Jaylen Adams, who took the big bucks in Serbia, but have picked up a handy replacement in former Detroit Pistons point-guard Derrick Walton jnr.

It’s an even bigger weekend for … the 200,000 brave souls expected to visit Mount Panorama for the Bathurst 1000. Heavy rain is predicted all weekend, including 30mm on Sunday, making it tricky for fans and drivers alike. It’s the last time we’ll see the iconic Holden badge in the race. Series leader Shane van Gisbergen can wrap up the Supercars championship with victory.