The Iceland volcano reared its ugly head last night after staying dormant for nearly 800 years. The eruption went off at Geldingadalir near Fagradalsfjall mountain on Reykjanes Peninsula in southwest Iceland. Thousands of earthquakes rocked the region since February, leading geologists to speculate magma was rushing to the surface.

Fagradalsfjall erupted on Friday, March 19, at about 8.45pm GMT.

Although the eruption was minor, all things considered, oozing streams of lava covered about one square kilometre.

According to volcanologists at Volcano Discovery, the eruption began with a 500 to 700m fissure splitting the ground wide open.

The website said: “The new eruption is located near Geldingadalir, around the centre of the recent dike intrusion of magma that has formed under the peninsula over the recent weeks.

“It started very quietly with almost no seismic activity when finally, a fissure opened, reaching around 500 to 700m length.

“The monitoring Icelandic Met Office (IMO) first became aware of the eruption from local reports of visible glow in the area about half an hour after the onset of activity.

According to the Icelandic Meteorological Office, the eruption spewed jets of molten rock up to 100m into the sky.

Rannveig Gudmundsdottir, who lives Grindavik, only five miles from the eruption, said the lava bathed the night sky with a red glow. 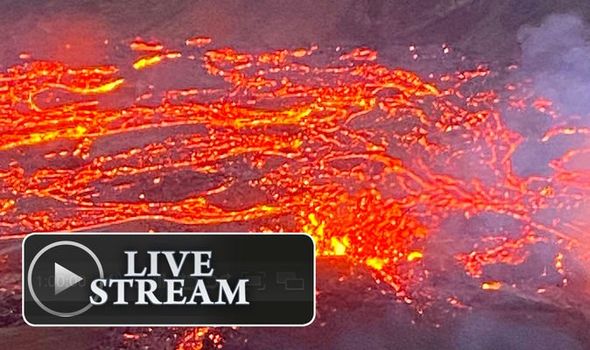 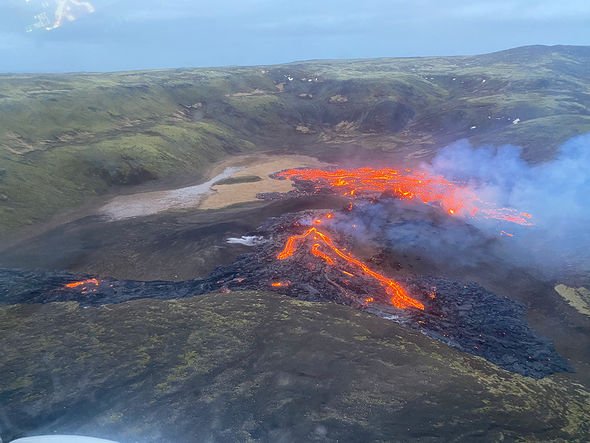 She added: “Everyone here is getting into their cars to drive up there.”

However, the police and coastguard have advised people to stay away from the area.

There is no threat to life at present but two lava flows are streaming from the area.

Volcano Discovery said: “The location of the eruption near Geldingadalir is in an area with very little infrastructure potentially at risk, something Icelandic authorities likely are happy about.”