FIRST-TIME buyer Simi Jolaoso drastically overhauled her finances, cutting her monthly spending in half to help save up for a deposit for her first home.

The 29-year-old journalist, originally from Edmonton, London, admitted she used to splurge nearly £1,000 a month on dinners out, clothes and pricey groceries. 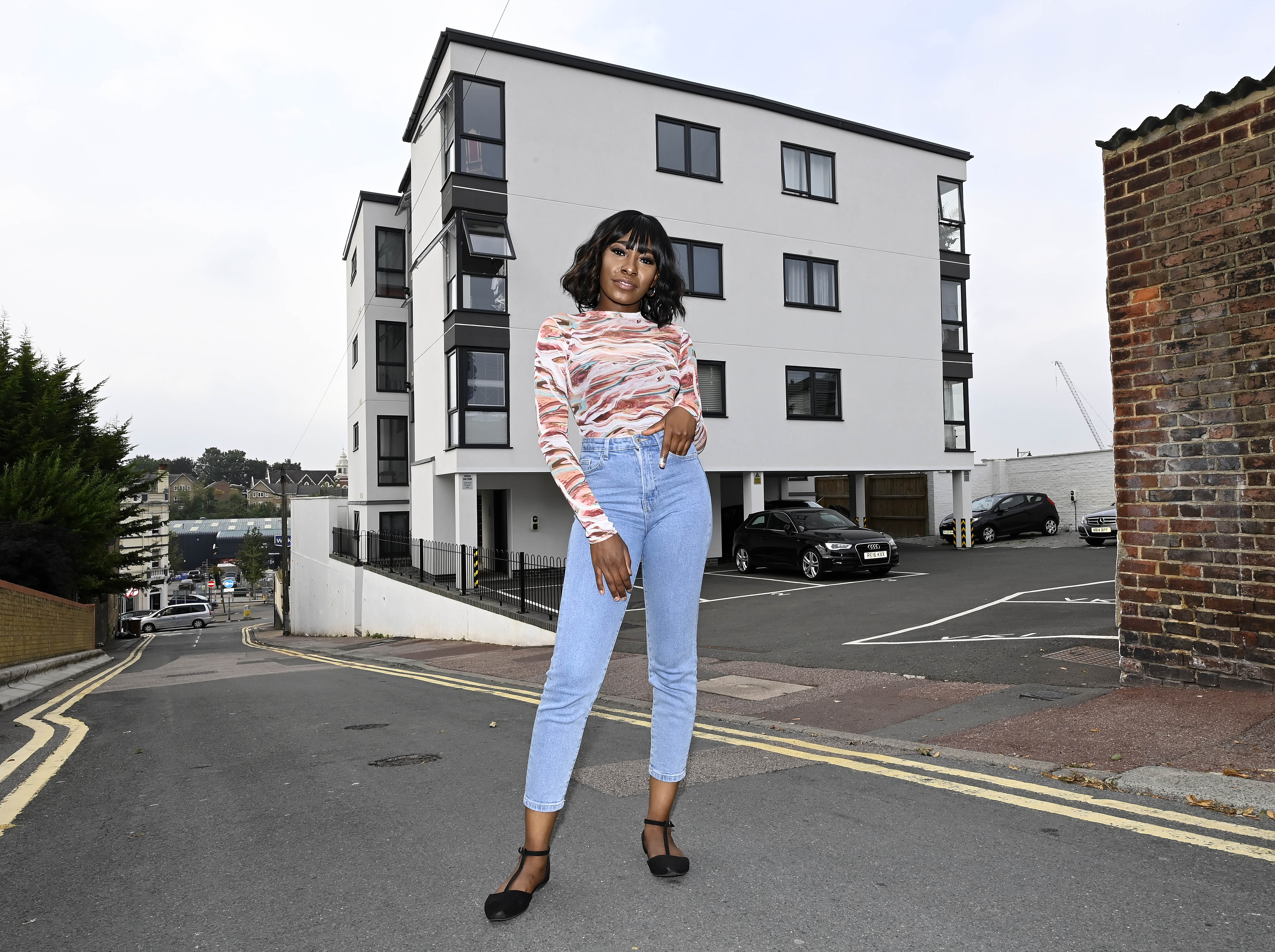 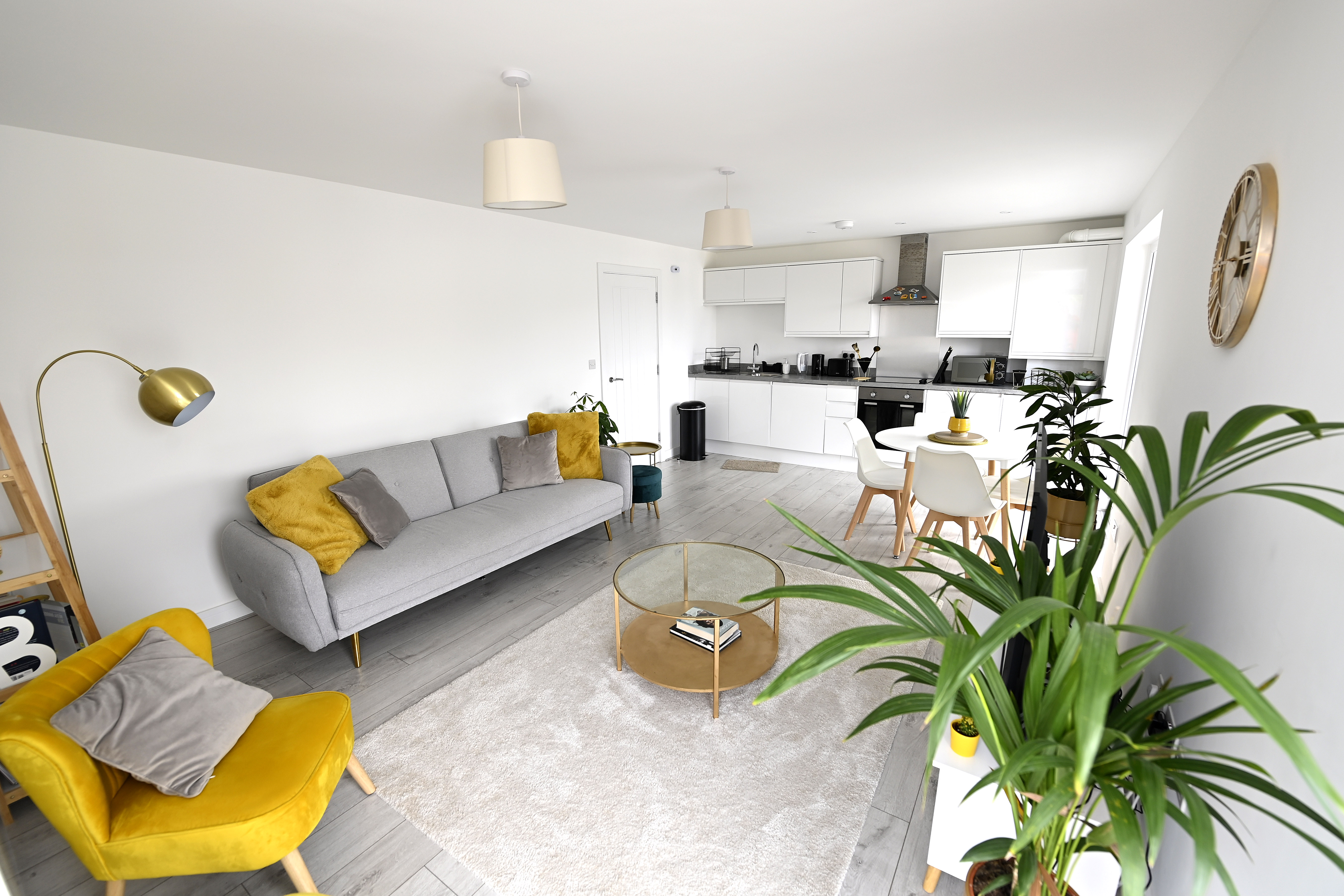 But in 2018, after realising she radically needed to change her lifestyle to build up her savings, Simi budgeted “every single aspect” of her life, right down to whether she would be buying fresh or frozen food, every month.

Paying her car insurance off in one chunk instead of monthly installments and using cashback websites helped Simi stash £300 to £500 away into her savings account each month.

She managed to raise enough cash to make an offer on a house in just two years – with no financial help from friends or family and paying up to £600 a month in rent over this time.

She used the government’s Help to Buy scheme, taking out an equity loan of £43,000 and putting down just under £11,000 for a deposit for a two-bed flat in Kent she fell in love with in August last year.

Despite facing a number of delays to her Help to Buy application and other setbacks to the house buying process, Simi exchanged and moved into her new flat in February this year.

She’s also a live-in landlord and rents out her spare room for £650 per month.

This means that she can build back her savings and focus on paying off her Help to Buy equity loan within five years – otherwise she’ll be paying back thousands of pounds in interest on her repayments after this point.

We chatted to Simi about exactly how she managed to turn her finances around and bag the flat of her dreams for The Sun’s My First Home series.

Tell me about your house

It’s a two-bed flat in a four-storey new-build block in Chatham, Kent. One of the bedrooms has an ensuite.

There’s an open-plan living room and kitchen area, and the lounge leads out onto a balcony.

I have no pets, but I’m looking to get a tortoise soon.

I have an allocated parking space in the building’s car park.

Why did you decide on the location?

I grew up in north London, but I made a decision to move out of the city because house prices are so expensive.

When I was hunting for a location on Rightmove, I thought houses in Kent were reasonably priced compared to other commuter areas near London.

My flat was exactly what I was looking for – as it’s a new-build, it was ready to move into and I could add my own touch to it.

The location is great – my family live 40 minutes away and it’s only an hour to commute into the city.

How much did you pay for it?

The scheme sees the government lend you up to 20% – or 40% in London – of the value of your property.

You only need to put down just a 5% deposit for an eligible home – which are new-build properties.

I took out an equity loan of around £43,000 to stump up the rest of the cash needed to secure the flat – which I don’t have to pay any interest on for the first five years.

I’m planning to repay the loan before the five years is over so I don’t have to fork out thousands of pounds on interest repayments.

I used the Help to Buy scheme because it helped me become a homeowner much quicker.

Usually, you have to put down at least 10% to secure a home otherwise.

I really liked the apartment but didn’t have enough cash saved up for a deposit of this size – and I knew if I'd waited another year or so the flat would have been sold.

I decided to use the scheme so I only had to put 5% down for it.

My mortgage repayments are £516 per month.

But as I’m a live-in landlord – I rent my spare room out – this income I get covers these repayments.

I charge £650 per month for the room, which includes everything such as the use of all the appliances, kitchen equipment and bills.

Everything you need to know about being a live-in landlord

IF you’re happy to share your home with others, being a live-in landlord can be a great way to make some spare cash.

The extra money can be helpful taking the pressure off paying your mortgage repayments.

Here's everything you need to know about being a live-in landlord – from contracts to tax implications.

Putting the rent up

Repairs and damages to your home

Were there any complications?

My flat nearly slipped through my fingers because I ran into so many delays exchanging on my home at the end of the process.

My mortgage advisor said it usually takes two to three months to complete, but it ended up taking five.

It took an extra two months in total to get the deal over the line because of issues with my Help to Buy application and survey delays.

I put an offer in on my flat in August, and my mortgage advisor applied for the Help to Buy scheme on my behalf the same month.

It was quickly approved in September, but it would be February this year before I exchanged and finally moved in.

My paperwork took much longer to process because of a backlog of housebuyers rushing to buy homes over the Covid crisis.

My bank also wanted to do a survey on the value of the flat to check it’s being sold for the right amount of money in October.

But it was sent to the wrong department in the bank, so I had to resubmit the paperwork and it took an extra three weeks to sort out.

Then, there was a two week delay handing over all the funds to the developer because of a mix-up at my solicitor.

There was also another two week delay because I was told I had to ask permission from my mortgage lender for me to rent out one of the rooms in my flat.

I had always planned on buying a two-bed flat so I could rent one of the rooms out to help with my mortgage repayments.

But my seller wanted written confirmation from the Help to Buy advisors that I could get a lodger into the spare room.

Some first-time buyer schemes won’t even lend you money if you’re planning on renting one of the rooms out – luckily mine would.

How did you save for it?

I had to get really tough on my spending, slashing my monthly spending in half in order to save for my flat.

I managed to cut all of my outgoings – apart from my rent bill and my car insurance which I started to pay off annually – from £950 to £520.

When I first started working in media, I wasn’t great with my money.

I would spend all of my monthly paycheck on going out, clothes and pricey dinners with my friends.

But in 2018, still on a relatively low salary of £23,000, I knew I needed to radically change my lifestyle in order to start building up my savings which were pretty much non-existent.

I sat down one day, did some calculations and budgeted every single part of my life so I could put away £300 to £500 every single month out of my £1,550 salary.

I set up a Help to Buy ISA so I could shovel as much savings as possible into this account.

I shopped at cheaper shops including Asda and Aldi, and asked staff at my local stores which days they restocked their shelves so I could bag food with a longer sell by date that wouldn’t expire as quickly.

I used to buy fresh fruit and vegetables, but I switched to frozen goods instead which are much cheaper.

I would go on yellow sticker hauls, buying discounted food and freezing it so I could use it at a later date.

Another way I saved a lot of money was to pay for my car insurance bill annually so I didn’t have to pay extra on interest repayments.

Cashback websites also helped me earn money back on my weekly grocery bill, or any other items I needed to pick up.

I often used the Admiral Rewards app – if you go through the app and click on retailers’ websites, you can get up to 3% cashback on your shopping.

Going out with my friends for dinner and drinks was also a big expense before.

I was spending £350 a month on this, but narrowed this down to £200 by ditching pricey cocktails and ordering the cheapest drinks on the menu.

Small dishes or appetisers were my go-to options, instead of opting for bigger and more expensive plates if I was out for a meal.

By 2020, I had saved so much that I decided to put my savings into a property and become a homeowner.

How did you afford to furnish it?

It took six months in total between putting an offer in for the flat and completing the deal – but this allowed me to save as much as possible in the meantime.

I made sure to put aside a couple of grand to pay for essential items of furniture, such as the beds I needed for my room and the spare room I was renting out, a sofa and wardrobes.

However, I took a few bits with me from the flat I was previously renting, including a toaster and a few tables.

I also upcycled some furniture instead of forking out for brand new bits with big price tags.

I bought a £35 Ikea coffee table and gave it a makeover – I spray painted it gold.

All the gold furniture I was looking at online was costing at least a couple of hundred pounds.

For the spare bedroom, I painted my old mirror white instead of buying a new one for at least £100.

I didn’t splurge on furniture all in one go – I bought items bit by bit so I didn’t blow all my money at once.

What is your advice for other first time buyers?

Buying your own place is achievable, but you have to be disciplined with your finances.

Put money into your savings account first when you get your monthly paycheck through and budget absolutely everything.

Properties come and go, so don't feel pressured to get into or buy something, especially if you don't feel ready.

When you do finally take that step to buy, don't be afraid to ask questions – tell your solicitor to dumb things down if you don't understand because that's what you're paying them for. 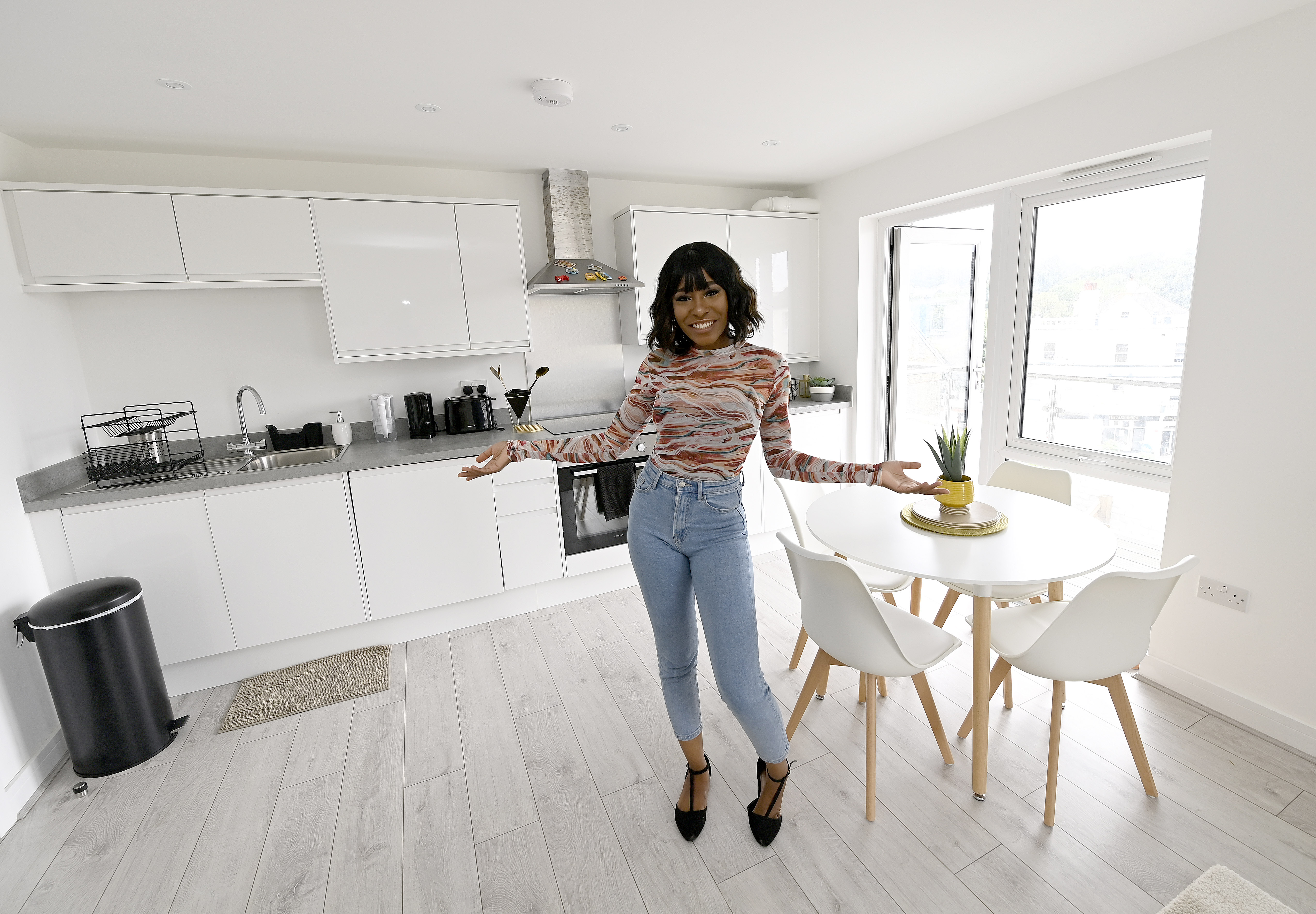 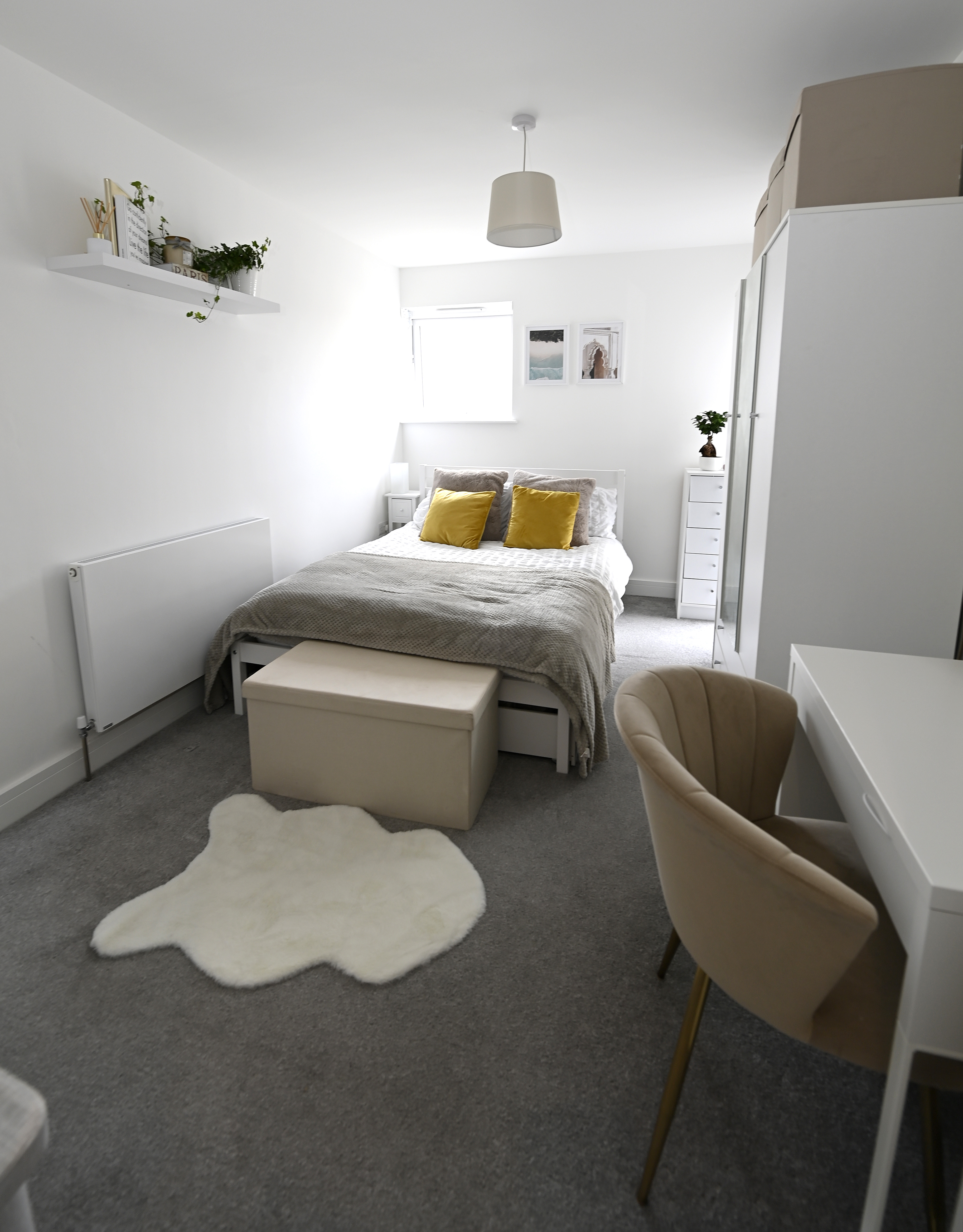 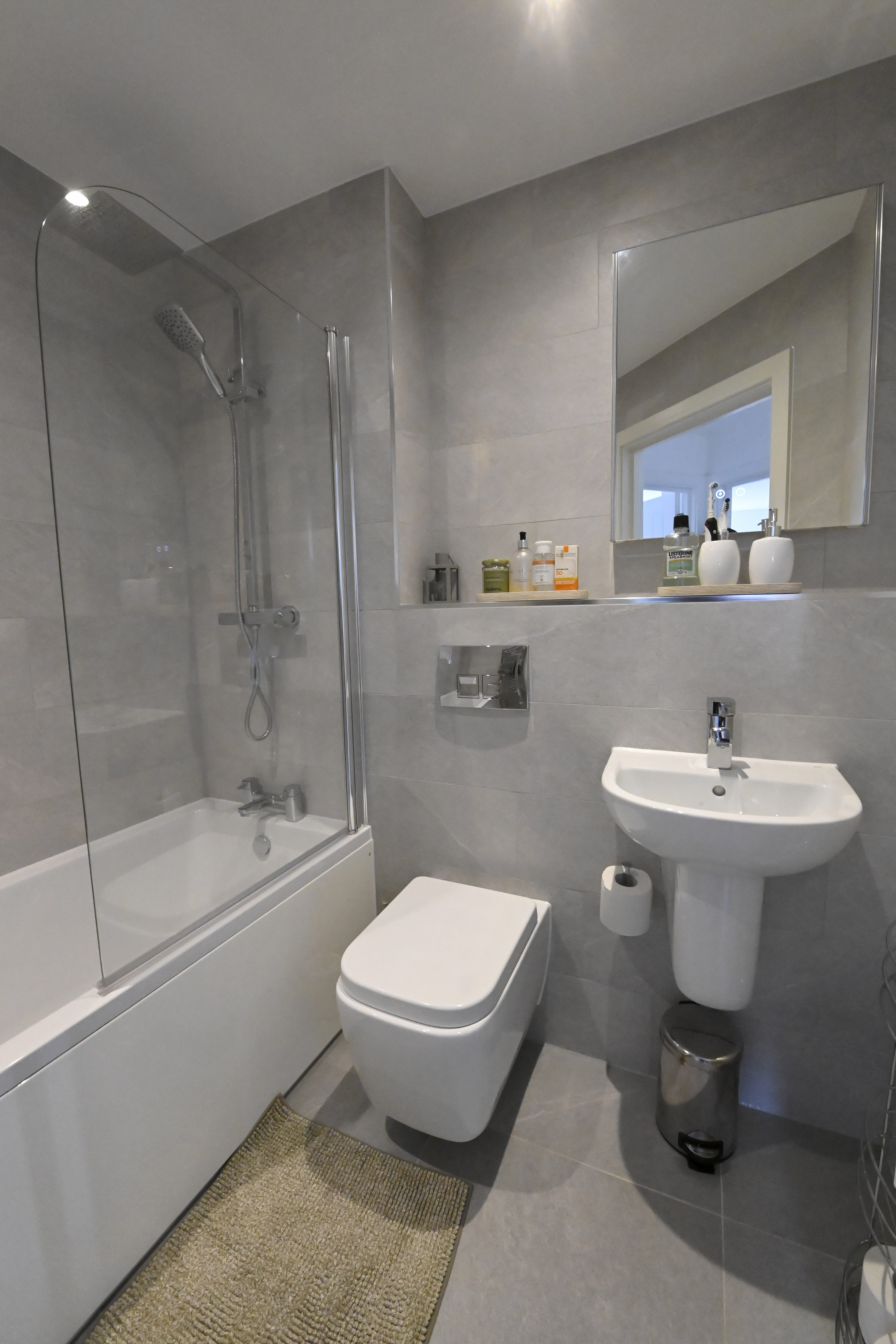 This is how a student nurse went from being "silly with money" to buying her first home in just two years.

Another first time buyer doesn't pay a penny on his mortgage repayments.