If you've never heard how Bill Withers came to cast that 52-word spell in the middle of Ain't No Sunshine, it's a good story. It was the spring of 1971 and the studio tape was rolling – but Withers hadn't finished writing the lyrics, so he improvised to fill space and eat the clock. Before he could grab a pen to complete the verse, his producers had been convinced that they'd heard magic and urged him to keep the take. With a shrug for the ages, Withers consented. 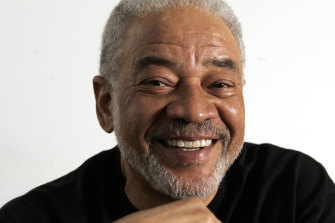 Revisit that moment with this little anecdote in your ears, and you might hear tiny flickers of rushing and reticence in Withers' bedrock voice. He's messing around, passing time. But as Withers carried Ain't No Sunshine in his pocket from stage to stage in the years that followed, he learned to slow down and sink all the way into those 52 words. In the studio, he was spinning his wheels. In concert, he was venturing into his deepest self.

For Withers, who died on Tuesday at 81, repetition was central to his songcraft from the start. The West Virginia native got a famously late break, having spent his late 20s doing repetitive work in California's airplane factories, reciting musical ideas over and over in his head so as not to forget them before the end of his shift. When he officially entered the record business at age 31, he was wise enough to be properly repulsed by it, and he resolved to approach his songwriting in a broad-minded way.

"You can make songs about trucks, ducks," Withers told a Dutch television crew in 2011. "Everything you could possibly think or feel or imagine, whether you're happy or homicidal or whatever – there's probably a song for it."

Withers achieved staggering emotional breadth with such simple techniques, jotting lyrical thought-bubbles down on scraps of paper, then meditating on them until their durability felt worthy of a song. It made him a patient editor who refused to be confined by whatever the world normally expects from a love song. He wrote love songs about family (Grandma's Hands). He wrote love songs for his friends (Lean on Me). He wrote love songs to the face across the pillow that doubled as love songs to existence (Lovely Day). If you feel as if you could listen to them a thousand times, it's because Withers sounds like he sang them to himself a thousand times before putting them into circulation.

Withers is exalting the universe, yes. But he's talking to himself, too. Just like on Ain't No Sunshine. When we sing along, the repetition in his music becomes a mantra that we use to convince ourselves that this life – in all its loneliness and bliss – is real.