The dark frontier of Aaron Guzikowski's Raised by Wolves is a challenging place: two androids, Mother and Father, raise human children from a trove of embryos saved from a dying Earth, while a shipload of religious zealots led by Marcus (Travis Fimmel) and Sue (Niamh Algar) land on the planet Kepler-22b in search of salvation.

Produced and directed by one of the great masters, Ridley Scott, it is an uncertain and frightening world. Critical reaction to the series in the US has been cautiously positive. But even Entertainment Weekly's Darren Franich, who praised it, offered a word of warning: "[It] reflects an unusual instinct for decent-budget science-fiction: it's impossible to root for anyone." 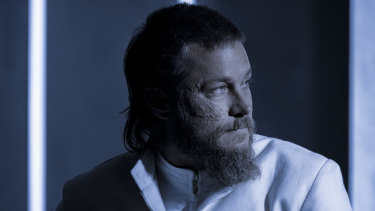 Australian actor Travis Fimmel stars in Raised By Wolves. “Everything is just from Ridley’s creative mind,” he says.Credit:Coco Van Oppens/HBO

"And remember, when I was doing TV at the BBC, where I was doing one hour shows, or two hour dramas, live, that's where I learned to use six cameras, because at BBC Television Centre in those days, doing a live play, once you say, "action", you're on with 15 million people, with six cameras moving everywhere all the time. I think that's what really helped me move quick as I do in film. Never forgotten that."

Raised by Wolves – a reference to the two different groups in the series who seek to control the destiny of the children in the colony – poses challenging questions about faith, politics and power. Scott says it aspires to say as much about contemporary life as a historical series might.

"It's a bit like making history films, we realise we don't learn too much," he says. "We don't learn by past events, and we keep making the same mistakes. I think we're witnessing that right now. It's relevant to me in that way because the use of a science fiction [story]… in a funny kind of way it's like striking a warning bell."

Guzikowski's inspiration for the story was his own three children and the question of how to raise them in a world where technology was encroaching, and wondering how they would interact with it.

For Scott the next step was building a universe around that question, which did not not resemble the very familiar science-fiction universes of Alien, or Blade Runner.

"My intuition here was to think, how the hell do I make this look different, because Aaron's idea is so encompassing and exotic," Scott says. "It's so fresh and different, so it's very easy to be corny. And that was one of the biggest challenges, how do I keep that and make it different? And I think we did." 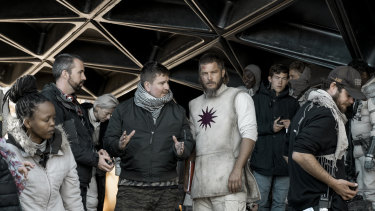 Travis Fimmel on the set of the series.Credit:Coco Van Oppens/HBO

"School for me was a very bad idea," he says, laughing."Whatever you call the GCE [the equivalent of the US SAT or the Australian HSC], I got one out of 10 subjects, so I was critically stupid, but I was very good at one thing, which I followed, which was art. And I spent seven years in art school.

"In those days, that was like a doctor's training because you do four years provincial and then if you go further, which I did, you go to the Royal College of Art," he says. "So seven years of art school, honestly, I owe my entire film career to that. I still use those skills every day when I'm making a movie." 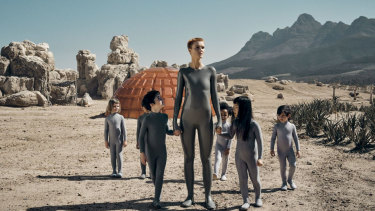 And as for his phallic shaver starship, Ridley chuckles at Fimmel's recollection of their first discussion. "It's carrying Adam and Eve, and Adam and Eve are looking after the children … so what does the craft look like?

"Now, you can go to all kinds of bells and whistles and knobs and make it huge and all that stuff, but I was staring at my electric razor in the morning and thought, holy shit, this is really brilliant," Scott says. "And that's what it is. It is big, it's stainless steel, it's the most beautiful thing that I've seen."

Raised by Wolves premieres on Fox Showcase and Foxtel On Demand, Thursday, 8.30pm. 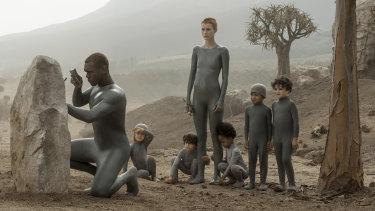 Ridley Scott is the executive producer of the dystopian epic Raised By Wolves.Credit:Coco Van Oppens/HBO