Prime Minister Scott Morrison has ended a difficult week by admitting defeat on what was supposed to be an important economic reform for his government. Mr Morrison has spent the past 10 months pushing for the first broad changes to industrial relations law since 2013, when his predecessor Tony Abbott said a repeat of the Coalition’s WorkChoices law was “dead, buried and cremated”. 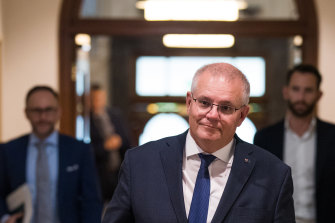 Scott Morrison, whose government was forced to gut its own industrial relations bill this week.Credit:Jason South

The bill, which set out far more modest changes than WorkChoices, was the government’s attempt to show it could sit down with unions and employers and invoke the spirit of national solidarity created by the COVID-19 crisis to strike a compromise on one of the thorniest of political issues.

“It is not beyond Australians to put aside differences to find co-operative solutions to specific problems, especially at a time like this,” Mr Morrison said last May.

Yet on Thursday, facing Greens and ALP opposition and having failed to persuade enough crossbench senators, Mr Morrison gutted key provisions of the bill. He pushed through only useful but fairly limited changes to the definition of casual employment. The bill establishes a clear process for switching from casual to permanent work after 12 months and also overrides a Federal Court decision that found many workers who had been paid as casuals should have additionally received the entitlements for permanent employees, including paid holidays.

Employers who feared the court decision would allow many workers to “double dip” and claim up to $39 billion of backpay, chalked that provision up as a win. For most Australians who enjoy casual work and had never heard of the court decision, it will maintain the status quo. Yet the government dropped more far-reaching changes to industrial awards, wage bargaining and conditions for workers on big construction projects that were supposed to improve productivity. It also ditched provisions criminalising serious cases of underpayment of workers by employers.

The government will, with some justification, blame its decision to gut the bill on intransigent opposition from unions, Labor and the Greens, as well as the flakiness of the crossbench. Unions can claim a victory in halting most of the government’s plans but resent the casual changes, correctly believing they will not restrict the growth of insecure work. Overall, the result will do nothing to rebuild their membership or their centrality to wage bargaining.

But ultimately this is a blow to the government: it was an economic priority and the government has failed to deliver. Part of the problem lies in its tactics. It was always going to be hard to pass this legislation so close to an election once partisan politics displaced Team Australia, one reason the government appeared eager to deal with the issue this week. It was always unfortunate that the government used criminalising wage theft as a bargaining chip to try to secure union support for other measures.

Wage theft should have been a bipartisan issue. Honest employers support this measure just as much as unions since it protects them from unfair competition from businesses that underpay their workers. The government could have easily won Senate support and retained wage theft in the bill. It is now in the difficult position of having to explain the decision to withdraw it.

More broadly the government must ask why it failed to convert its success in managing the fallout from the COVID-19 pandemic into votes on the Senate floor. Unemployment fell below 6 per cent this week, much faster than expected only a few months ago, suggesting the Coalition may be a victim of its own success, with economic recovery denting the case for reform to the system.

But the government has also been distracted for weeks by sexual misconduct allegations and criticism of its attitudes to women. It is possible that the industrial relations bill failed in part because the responsible minister, Christian Porter, is on mental health leave after a historical rape allegation was levelled at him. Mr Porter vehemently denies the allegation. We’ll never know if Mr Porter’s presence in negotiations would have come up with a different result for the government, but his absence cannot have helped.

The IR failure coincides with the news that the government has lost its Newspoll lead for the first time since the previous election and that voters in the West Australian state election, admittedly not fought on federal issues, handed the Coalition a historic drubbing in one of its strongholds. To overcome this malaise Mr Morrison must try again to develop an agenda that goes beyond handling the COVID crisis and granting $130 billion in tax cuts as part of the government’s “stage three” package.

Mr Morrison in February ruled out another attempt at tax reform, saying he would not pursue reform for “the sake of vanity”. He is pushing ahead with some uncontroversial reforms of the state-federal system of training and vocational education and he has promised a response to the recommendations of the royal commission into aged care in the May budget.

The Age has long called on the federal government to go much further and produce a serious climate and energy policy and create a federal anti-corruption agency with real teeth. It also must not, because of this one defeat, abandon its attempt to persuade Australians to come together to find solutions.

The government can be forgiven for having most of its bandwidth taken up by the pandemic, but now voters want to know what it is planning next.