He was dating Elizabeth Hurley at the time.

Hugh Grant revealed his infamous sex scandal emerged after a screening of his “atrocious” acting and a subsequent liquid lunch.

In 1995, the British actor was arrested with sex worker Divine Brown for engaging in “an act of lewd conduct” off the Sunset Strip. 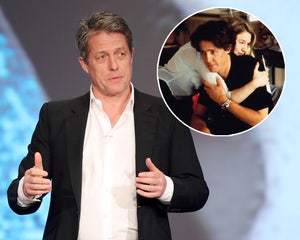 “Everybody in it was brilliant but I was so atrocious that I was not in a good frame of mind,” he continued. “I had a Ken Russell kind of lunch and one thing led to another.”

Russell, the late British filmmaker, was famous for his directing style which grew “exponentially broader as his alcohol intake for the day increased,” according to The Guardian.

The movie, “Nine Months,” co-starred Julianne Moore, Robin Williams and Joan Cusack. It went on to be a commercial success, earning $138.5 million worldwide.

“The film did all right at the box office,” Grant said on the podcast. “It did quite well and that’s all Hollywood really cares about. They don’t care what you get up to as long as you make them money.”