Along with new logos for the Dynamo and its affiliate NWSL club, the Houston Dash, the club's rebrand is "the first step of becoming the type of club that represents a great community like Houston," controlling owner Gabriel Brener said in a press release.

The refresh further unites the Dynamo and Dash with a "significant shift in philosophy and vision today as part of a new, cohesive brand identity that is rooted in the Bayou City."

Zac Semmons, VP of marketing and communications, said the goal is to make the club more Houston-focused and recognize soccer's growth in Houston since 2006.

"We've grown over the last 15 years to include a men's team, a women's team, a youth pipeline on the boys side and the girls side, our own training facility, our own stadium, and a fan base as well, " Emmons told USA Today Sports. 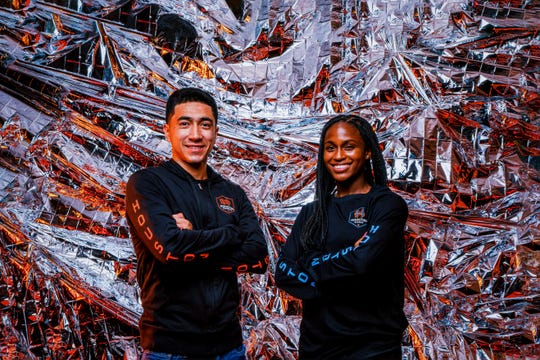 The previous logos were largely orange with large "Dynamo" and "Dash" lettering. The new logos diverge from that, making "Houston" more prominent on the new hexagonal emblem. Orange is still prevalent in the design, with the Dash adding blue lines to represent the waterways within Houston.

The new crests were designed with the help of Houston-based marketing and creative agency 9thWonder.

We are One Club. We are Houston Dynamo FC.
#HoldItDownpic.twitter.com/CDxDteBXTf

The Houston Dash joined the NWSL as an expansion team in 2013, and won its first trophy, the 2020 Challenge Cup, over the summer.

The Houston Dynamo has won two MLS Cups, back in 2006 and 2007, during its first two years of existence. The team has most recently won the 2018 Lamar Hunt U.S. Open Cup.