Visibly shaken, his thesaurus of misery exhausted… this was his darkest hour: HENRY DEEDES watches Boris Johnson addressing the nation after 100,000 deaths from Covid-19 were confirmed

For Boris Johnson this was his darkest hour. A moment for sombre reflection, as haunting as the sounds of muffled drums and Chopin’s funeral march.

The grim news that had broken just moments before – that the death toll from the pandemic had surpassed 100,000 Britons – had left the Prime Minister visibly shaken. His face was flushed, his hair seemed whiter than ever.

This terrible milestone had, of course, been some time coming. Yet even this accomplished wordsmith struggled to summon the mots justes for the occasion.

He intoned how hard it was ‘to compute the sorrow contained in that grim statistic; the years of life lost’.

He had simply ‘exhausted the thesaurus of misery’ to describe the tragedy that coronavirus had unleashed on the country. 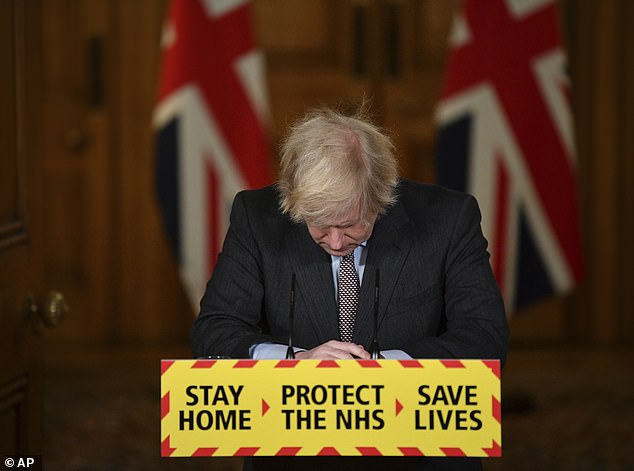 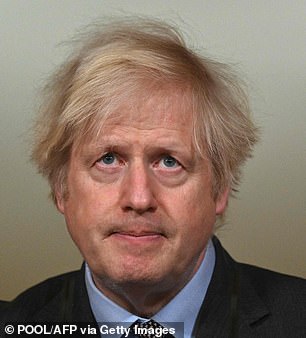 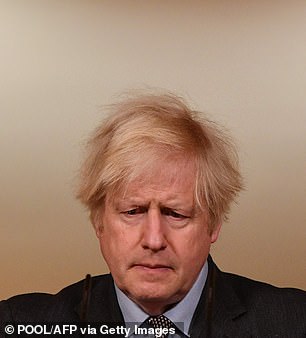 The grim news that had broken just moments before – that the death toll from the pandemic had surpassed 100,000 Britons – had left the Prime Minister visibly shaken

He was humble and dejected – and, unlike many politicians, he was also willing to apologise.

‘On this day, I should just really repeat that I am deeply sorry for every life that has been lost,’ he said.

‘And, of course, as Prime Minister, I take full responsibility for everything that the Government has done.’

He went on: ‘What I can tell you is that we truly did everything that we could.’

For us watching it too was a particularly queasy moment. The numbers of the departed now exceed the capacity of most football stadiums.

Less than a year ago, as those of us in the Press pack attended the first of these briefings, we were warned deaths could reach into the tens of thousands, Some of us thought it all sounded a bit over-dramatic. A whole other time that now seems a whole other world.

Boris pledged to commemorate ‘all acts of kindness’ and ‘the spirit of volunteering and the daily sacrifice of millions.’ He spoke with some experience on this. He too for time had felt death’s cold hand gripped upon his shoulder.

A pair of awkward pallbearers not quite knowing where to avert their eyes or how to arrange their hands.

Whitty flipped up a slide that mercifully showed death rates were coming down. He warned we should even expect them to flatten off over coming weeks. I found his slightly panicky tone unnerving.

Sir Simon is a cooler customer. He is comfortable in the oak-panelled hallows of Downing Street.

Though doubtless he will have rattled the crockery when he spoke of virus treatments improving over the next ‘six to 18 months’. Boris rather hopes we’ll be out of the woods before the summer of 2022. 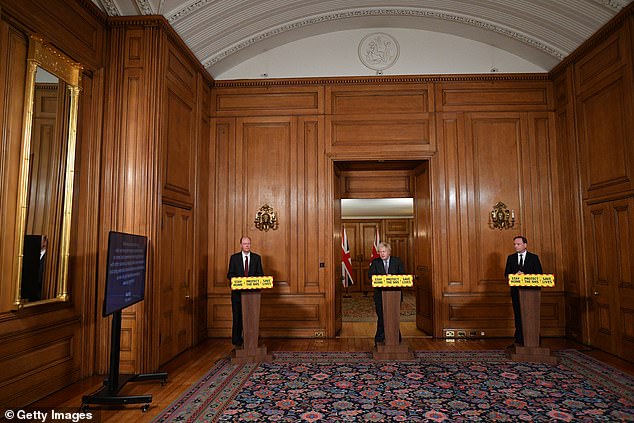 The Prime Minister (pictured with by Chief Medical Officer for England Chris Whitty, left, and Chief Executive of the National Health Service Simon Stevens, right) pledged to commemorate ‘all acts of kindness’ 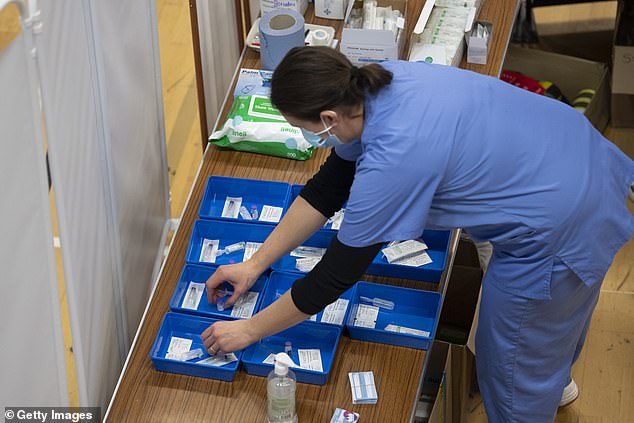 There was much else to discuss: schools reopening, the vaccine rollout. But all such matters slipped through the cracks in light of the appalling threshold that had just been crossed.

The broadcast media scented blood. The Beeb’s Laura Kuenssberg pointed out that the Government originally forecast a ‘good result’ of around 20,000 deaths – yet we were now at five times that figure. What had gone wrong?

Paul Brand from ITV asked Boris how he would ‘describe’ the outcome of 100,000 deaths.

Steady people, I felt like shouting. You’ll get your pound of flesh. There are going to be enough inquiries, public hearings on this disaster over the next decade to keep our legal sector in silk stockings for a lifetime.

A Mirror reporter asked whether the PM had been speaking to families of the bereaved. Of course, said Boris. He would continue to do so.

Would NHS nurses be getting bonuses? Sir Simon rode to his rescue at this point and said that what his staff really craved was a moment of respite from such an awful year.

After forty minutes, the PM trudged off as slowly as he’d arrived, his shoulders heavier than concrete breeze-blocks. For him, no respite is in sight. Not while this dreadful disease steadfastly refuses to give any quarter.