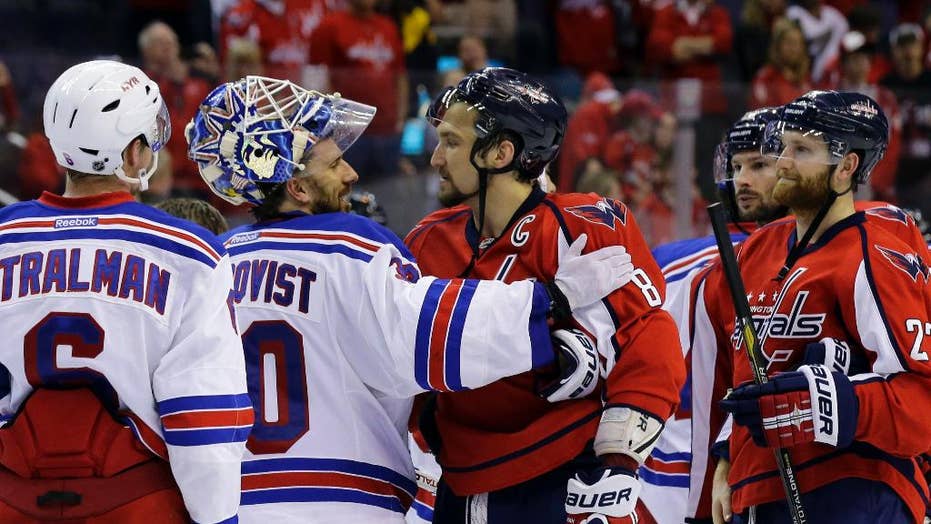 “I still love to compete. I still love the game and I still want to WIN,” Henrik Lundqvist tweeted Sunday, leaving little doubt the 38-year-old goaltender is willing to play for another team after the Rangers ended his remarkable run on Broadway with a buyout last week.

One option could be Washington, which is interested in adding its former playoff nemesis, according to Sportsnet.

The Capitals, who are in the Rangers’ division and faced Lundqvist five times in the postseason, are expected to let longtime goalie Braden Holtby become an unrestricted free agent. That would make Ilya Samsonov the starter following an impressive 16-6-2 rookie season.

It’s unclear whether Lundqvist would be willing to become a full-time backup, though it may be his only choice given that his play has regressed with age.

An opportunity with Washington to win his first Stanley Cup might make the veteran of 15 seasons open to such a role.

Lundqvist lost the Rangers starting job this past season with the emergence of 24-year-old Igor Shesterkin and it didn’t make sense for the Rangers to pay a backup goaltender with an $8.5 million cap hit. They instead chose to buy out the final season of Lundqvist’s seven-year, $59.5 million deal, opening up $3 million in cap space.

Other options for Lundqvist include the Hurricanes and Golden Knights. Lundqvist has made more than $100 million in his NHL career to date, meaning money may not be a significant factor in his decision.

Lundqvist’s brother (and former NHLer), Joel, is captain of a professional Swedish hockey team, which has led to speculation that the two could team up again in their homeland.

But it’s unlikely Lundqvist, who has won 459 NHL games, would return to Sweden to continue playing, as his wife and kids are likely to stay in New York next year.