The Australian National University has reported a $162.4 million operating loss for 2020 despite shedding more than 400 jobs and keeping more high-fee-paying international students enrolled than expected.

The result is better than the $219 million deficit the university had initially braced for but failed to match the relatively strong performance of other Group of Eight universities. 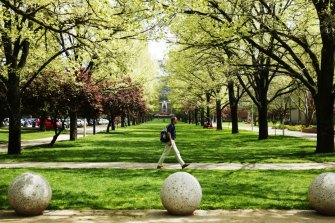 The ANU also confirmed it had offered the use of its on-campus residential accommodation as quarantine facilities and said it would cover students’ costs in a bid to get international students back into the country.Credit:Louie Douvis

The University of Melbourne, Monash University and the University of Queensland weathered the financial chaos of the COVID-19 pandemic to post surpluses for 2020. The University of Sydney on Thursday reported a slim $2.2 million loss for 2020, which it deemed a “remarkable” outcome given its earlier predictions of a $470 million budget shortfall.

ANU vice-chancellor Brian Schmidt told staff 2020 had been the “hardest 12-month period in our 75-year history” as he informed them of the financial results on Friday.

“The difference between our forecast and the actual 2020 deficits is mostly due to tuition income and income from research grants. This does not mean we have $57 million more than we thought we had. It simply means we have a smaller deficit,” Professor Schmidt said.

The ANU also confirmed it had offered the use of its on-campus residential accommodation as quarantine facilities and said it would cover students’ costs in a bid to get international students back into the country. It comes after the ACT government said on Wednesday it would no longer take repatriation flights because the hotel quarantine process was too expensive. More than a year into the pandemic, the university said it was concerned it was “no closer to being able to bring [international students] back to our campus”.

Unlike other universities, which have sought to aggressively grow their international student numbers as a means of cross-subsiding their operations, the ANU in 2019 moved to cap its cohort to 19,300 students as part of a five-year downsizing plan. The majority of ANU’s overseas students are from China, although the university could not provide exact figures.

Many Australian universities were forced to dramatically scale back their operations in 2020, freezing capital expenditure and cutting jobs while scrambling to offer online-only courses in a bid to keep their existing full-fee-paying overseas students and sign up new ones.

The ANU ended 2020 with $22.7 million more in tuition fees than it had anticipated at the height of the pandemic, as about 3000 international students continued their studies online from overseas. However, it still suffered an $81 million loss compared with 2019 fee income, driven by a 21 per cent decrease in the number of overseas students studying full-time. It also banked $27 million more in research income than expected, sourced from government grants and consultancy fees.

The ANU’s reportable deficit is a much smaller $17.7 million but the university said this factored in insurance payouts for 2018 floods and damage caused by a 2020 hail storm as well as investment returns that could not be used for general operational costs.

The university said it did not anticipate any more job losses than the 467 modelled in its recovery plan released last year.