Australian swimmer Madeline Groves says the chance to make the sport safer and be the catalyst for meaningful cultural change is worth more than any Olympic medal as she prepares to return to serious racing for the first time since creating a firestorm ahead of the Olympic trials in June.

The day before the nation’s elite swimmers would battle it out for precious slots on the Tokyo squad, Groves, a Rio silver medallist in the 200m butterfly, took a blowtorch to what she considered to be inappropriate behaviour from figures within the sport and announced she would refuse to compete. 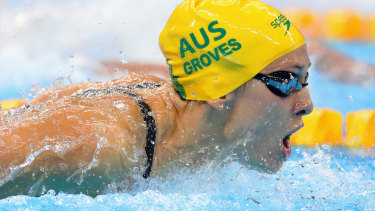 Madeline Groves says she is proud for taking a stand and withdrawing from the Olympic trials.Credit:Getty

“Let this be a lesson to all misogynistic perverts in sport and their bootlickers,” Groves tweeted. “You can no longer exploit young women and girls, body shame or medically gaslight them and then expect them to represent you so you can earn your annual bonus. Time’s UP.”

Now Groves has surfaced publicly for the first time before she departs to Europe to be part of the DC Trident team in the International Swimming League (ISL). The 26-year-old said she had been inundated with support since she made public her concerns, which have in turn seen Swimming Australia create an independent panel to examine complaints, the treatment of women and girls and wider cultural issues around pool deck.

“It was just great to get all that support to be honest, it was a nerve-racking thing to do. It was disappointing to miss out on an opportunity like that (Olympic trials) but the potential rewards absolutely outweighs the risk,” Groves told The Sydney Morning Herald and The Age.

“But it’s worth it. If this independent panel can have some meaningful outcomes that make the sport safer and more enjoyable for all stakeholders, not just women and girls, that is more valuable than an Olympic medal.” 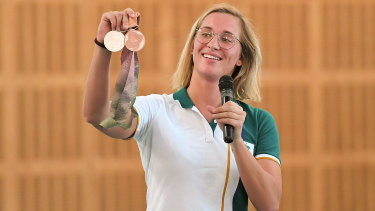 Madeline Groves has sparked a new wave of complaints about misconduct in swimming.Credit:Getty

Groves suffers from debilitating endometriosis and adenomyosis and there was immediate speculation that her health was behind her decision to withdraw. She insists that wasn’t the case and wanted to clarify that her concerns about the culture of the sport extend beyond issues around diets and body shaming for females.

“I will just say that it’s confusing the issue to say it just affects women and girls. That was obviously my comment but this has an impact on everyone involved to some degree, male swimmers as well,” Groves said.

“As an athlete, I’m used to being ignored. When I announced I wasn’t going, I had a lot of people contact me and telling me they hoped my health was ok, checking in on me. For the first time in a few years, my health was actually fine, I was making this decision on more of a personal level and necessity for my wellbeing.

“It sort of annoyed me that so many people thought it was my illness. It was more to do with the way I had been treated because of my illness.

“I was calling a spade a spade. It’s something I have been wading through and dealing with for a few years, so it wasn’t an off-the-cuff remark. I had a lot of time to work out how I feel about things. One of the things I didn’t want to do was to go on and represent people I don’t feel comfortable working with.”

In fact, Groves had contemplated taking a stance at the Tokyo Games themselves but thought better of the move after some confusion about the International Olympic Committee’s Rule 50, which governs when and how athletes can protest, and the fallout it could have for her teammates.

“It was very tempting to have a go and try to make the team and win another medal. I considered maybe making a statement at that stage, maybe even at the Olympics, or just afterwards. Obviously with the situation around Rule 50, it was a bit unclear what would be allowed.

Australian swimming is on a high after a record-breaking week in Tokyo, spearheaded by female stars Ariarne Titmus, Kaylee McKeown and Emma McKeon. Groves said she was thrilled to watch it all but that success should not mask the issues she says are still very much alive beneath the surface.

She said comments during the Olympics from Swimming Australia president Kieren Perkins, in which he defied “anyone to suggest there’s a cultural issue in swimming at the moment”, didn’t give her hope that there could be any quick fix regardless of the findings of the independent panel.

“It was incredibly disappointing that the head of the entire organisation could deny there could be improvement. It’s surprising because everyone else can see it. I have had a significant amount of people contact me and find out how they can get involved and speak to the independent panel, which is now taking submissions,” Groves said.

“There are a lot of amazing people who work in swimming and work really hard. But realistically, no, I don’t have a lot of faith that things will change because I have spent the past few years trying to advocate for change. Seeing how unsuccessful that has been hasn’t really given me a lot of hope.

“I should probably be more optimistic. I just hope that just because the Tokyo Olympics team was the most successful team ever that it doesn’t give people an excuse not to want to continue improving the culture.

“I’m more interested in how many people from a squad end up being severely injured, have low self-esteem, struggle with mental health, have eating disorders versus how many people are winning Olympic medals. How many of those people are you willing to sacrifice for the sake of winning medals at the Olympics every four years?”

Groves said she had made peace with the fact she may be a pariah among certain sections of the team and coaching staff. When asked if she would be warmly received if she made another national squad, Groves replied: “No. But I’m not really worried about that. I made this decision based on my own values, I don’t expect everyone else to understand or agree with me.

“I’ve had a lot of support from certain people on the team, athletes, coaches and staff, and I think the outpouring I have already had has made it totally worth it.”