According to a screenshot obtained by Bachelor Nation fan account @Bachelorteaspill, Greg’s sister Samantha fired back after Katie, 30, “liked” (and later “unliked”) a shady post about Greg, 28. 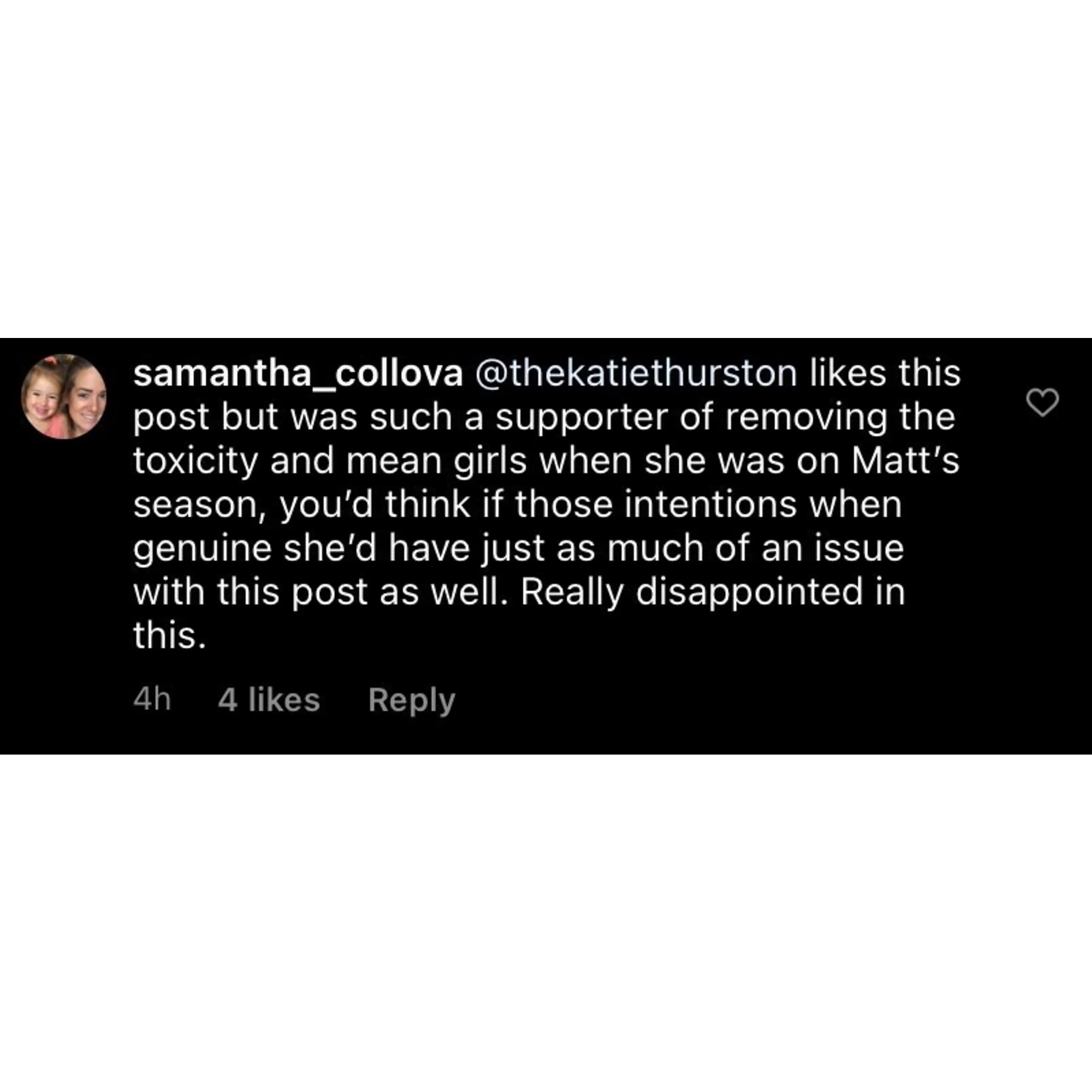 “@thekatiethurston likes this post but was such a supporter of removing the toxicity and mean girls when she was on Matt’s season, you’d think if those intentions when [SIC] genuine she’d had just as much of an issue with this post as well,” Samantha allegedly wrote in the since-deleted comment. “Really disappointed in this.”

Katie made headlines on Tuesday, June 22, when she double tapped on a meme that read, “When the guy next to you is getting interrogated about wanting to be the bachelor and you’ve gotta pretend to be disgusted while hiding your acting career aspirations.”

Former ‘Bachelor’ and ‘Bachelorette’ Leads: Where Are They Now?

In the accompanying photo, which was shared by Bachelor season 22 alum Bekah Martinez’s “Chatty Broads” podcast, Greg, who attended William Esper Acting School, looks annoyed in a scene from the Monday, June 21, episode in which the season 17 cast debated contestant Thomas Jacobs’ true intentions for going on the show. Later on Tuesday, Katie shared a video of her listening to Olivia Rodrigo’s breakup track “Traitor” via Instagram Stories.

Earlier this month, the former banking manager gushed about Greg, who received her first impression rose, during an exclusive interview with Us Weekly ahead of the June 7 premiere.

“What I loved about Greg is he was just true to himself, which was this very nervous, very uncomfortable guy,” Katie said. “He didn’t try and act cool or, like, be this guy that he’s not. He was just like, ‘This is me and I’m really freaking scared.’ And I thought it was really endearing, you know? And I could tell as long as he opened up, there was something more there. And so I thought, you know, giving him the first impression rose would give him that validation of, ‘I’m into you. Let’s figure this out.’”

Following their one-on-one date during the June 14 episode, Katie told the ABC cameras that she was already “falling” for the New Jersey native. The Bachelor season 25 contestant previously told Us that she is “happy” with the ending of her season, noting, “You know, I’ve come to learn that everything happens for a reason. And that being said, I am happy, yes.”

Greg has yet to weigh in on his apparent acting aspirations or the “Chatty Broads” meme, which Bekah, who appeared on Arie Luyendyk Jr.’s season, noted in the comments section was “a joke.”

The Bachelorette airs on ABC Mondays at 8 p.m. ET.