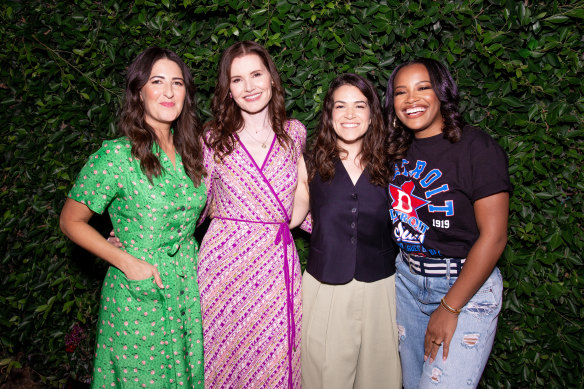 A League of Their Own’s D’Arcy Carden (left), Geena Davis (who starred in the 1992 film), Abbi Jacobson and Chante Adams at a screening of the TV series.Credit:Getty Images

Sometimes it’s tough to find a sense of history in a physical television production. The sets are quick builds, painted plyboard intended to mimic anything. The pace is fast. Scenes are shot and the vast machine rolls on. There is rarely time to pause for consideration, or even sentiment.

And yet, strangely, A League of Their Own drifts into the frame with something more complex going on. In part, that might be the fact it is based on the 1992 film of the same name, a fictionalised account of the real-life All-American Girls Professional Baseball League.

It certainly comes with baggage. The original film starred Geena Davis and Tom Hanks, with Madonna, Lori Petty and Rosie O’Donnell in support. And it was directed by Penny Marshall, once upon a time TV’s sitcom queen Laverne DeFazio, but in the second act of her career, one of Hollywood’s finest directors.

There is also the real-life history of the women who, as the men were drafted into the war effort, became baseballers so the professional sports league could continue through World War II. Its impact, in terms of the role women played in society, is still being felt today. 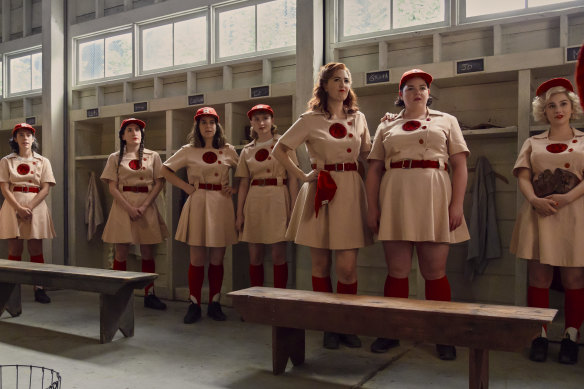 Somewhere, on this set, there are many ghosts. And even some women who played in the leagues who are still alive. And a new band of younger women who are ambitiously rebooting the story, giving it a wider and more historically authentic platform to explore the characters who populate it.

Central among these is actress/producer Abbi Jacobson, who points quickly to the life of Maybelle Blair, a consultant on the series. Blair batted and threw right-handed, and played for the Peoria Redwings in the 1940s. She was also gay, coming out only this year, aged 95.

“She did that publicly because we made this show about her and the other women who played; we made the show to tell their stories, and it encouraged her to tell her story,” says Jacobson, who is best known from the raucous comedy Broad City. “Now I see a difference in the way she is. She’s holding herself differently. She’s living differently.”

Jacobson’s co-star in the reboot, Chante Adams, echoes the sentiment. Adams plays Max, a pitcher who was unable to compete in the All-American Girls because of the colour of her skin. Instead, she played for the Negro Leagues (and, during the war-era boom, the Negro World Series).

“It gets to the point of why our story is important, for me and my character, for little black girls in sports, but also just in general,” Adams says. “Black girls who have a dream, period. To see a character like Max who gets knocked down, and told no, and faces a lot of obstacles; she knows she has a purpose and will do anything to achieve that dream.” 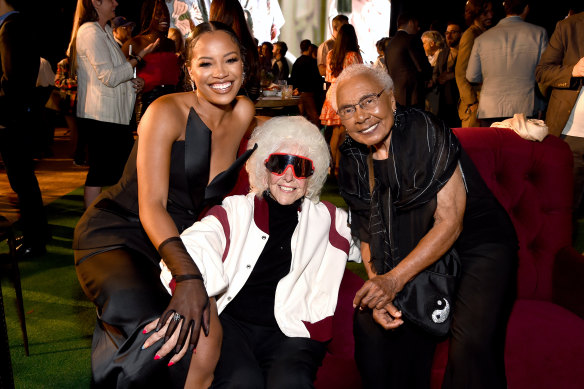 Actor Chante Adams with 95-year-old Maybelle Blair, who was a consultant on the show, and softball icon Billie Harris at the red carpet screening of A League of Their Own. Credit:Getty Images

The journey from concept to screen for A League of Their Own has been a long one. More than four years ago, Jacobson and writer/producer Will Graham approached Sony Pictures, who own the original film, with the idea of rebooting it.

Jacobson had originally seen the film in the cinema, but it was also one of the handful of VHS videotapes kept in her family’s living room. The others, she says, were Sister Act, Home Alone and The Mighty Ducks. “I watched all of those a lot, and there’s a through line in a way between them. They somehow, for me, encapsulate the 1990s.”

As a kid, Jacobson says she was also drawn to A League of Their Own because she played sport. “I played softball, but I was not exposed to, or did not see any representation of a film full of women playing professional baseball, so seeing A League of Their Own felt really revolutionary,” Jacobson says. “I loved just the joy and the spirit of those characters on screen. That really inspired me. It still does.”

Adams also recalls seeing the film in her childhood, but notes the long development arc for the series meant she was also able to re-watch it repeatedly during the development process. “I did go back and re-watch it because I was like, I don’t really remember women who look like me in the movie. Once I read the script, I saw what they were trying to do with this re-imagining of the story. It’s a classic. It’s great every time.” 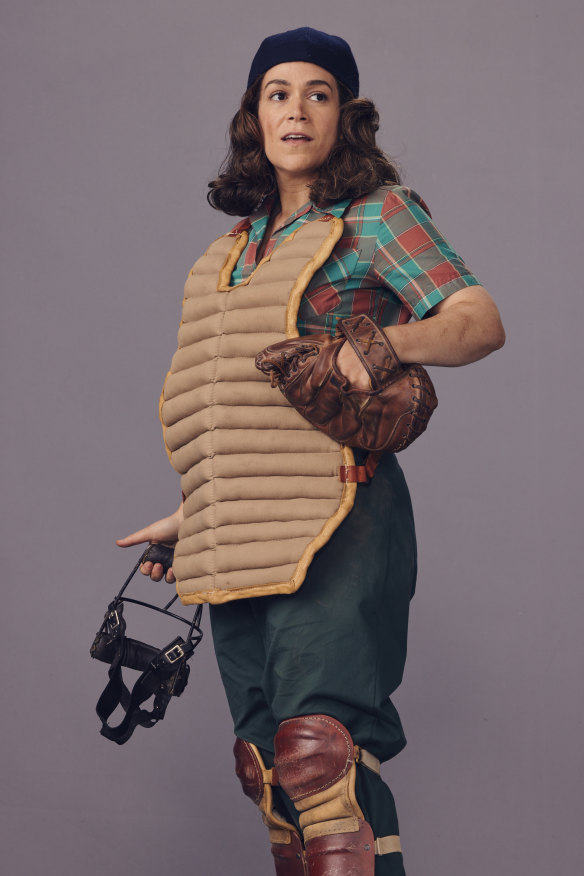 Abbi Jacobson as Carson Shaw in A League Of Their Own.Credit:Ramona Rosales/Prime Video

Much of the enduring affection for the original film relates to an enduring affection for its star, actor Geena Davis. In her spare time an Olympic-level archer, which is in itself astonishing, Davis’ career spans decades and includes The Accidental Tourist and Thelma and Louise. Off-screen, her advocacy for the representation in media gives the film and new TV series a powerful context.

Early in the development of the project, Jacobson met with Davis and the film’s director, Penny Marshall. “I’m such a fan of Geena’s, from this film and her whole, very long career in this industry, and it was also important to meet with Penny in particular,” Jacobson says.

“We reached out really to make sure they knew how much this film meant to us, and that we were not trying to remake it and that we were really trying to do something new in telling different stories,” Jacobson says. Her character Carson Shaw, she says, is very specifically not a do-over of Davis’s character pitcher Dottie Hinson.

“They were both so generous, telling us about the shooting process of the film,” Jacobson says. In particular, Jacobson wanted to discuss the scene in the original film that inspired the creation of Adams’s character Max, in which a black woman picks up a rolling baseball and tosses it back to Davis’s character.

“Penny said she felt like she couldn’t tell every story, but really thought that was an important one, and in 1992, I don’t think she could have told as many stories as we are in this,” Jacobson says. Marshall, in her characteristic drawl, told her: “Go make it already, go do it then.”

Jacobson also managed to track down Rosie O’Donnell, who played third baseman Doris Murphy in the original film, and actor Tom Hanks, who played the team’s manager, Jimmy Dugan. O’Donnell was enthusiastic enough to sign on for a small cameo in the series.

And Hanks, Jacobson notes, was protective still of Dugan, quizzing her on her plans for the coach. At the time they had not finalised their plan to cast Nick Offerman as a different coach, Casey “Dove” Porter. “I was terrified to bring the movie up, but I was like, ‘Don’t worry, we’re not doing Jimmy Dugan again,’” Jacobson says, laughing. 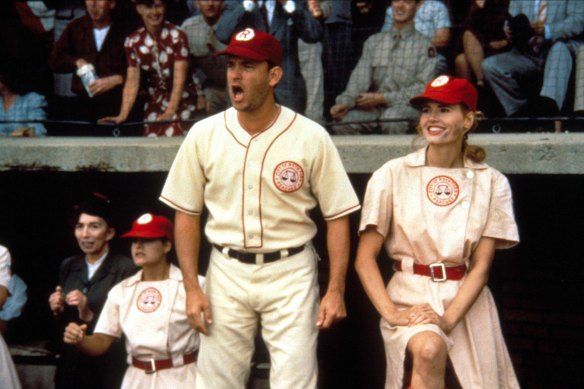 Tom Hanks and Geena Davis in A League of Their Own in 1992.

“It’s a lot of pressure for fans of the film and for those people for whom the film was such a big part of their filmography,” Jacobson says. “It was very exciting to get their approval.”

In many ways, a relatively complete reboot of the world of A League of Their Own frees the new cast to play with their characters in a way that does not mean they brush up against the original film’s cast. It also neatly sidesteps comparisons to Madonna, who played centre fielder Mae Mordabito, or Lori Petty, who played pitcher Kit Keller.

Carson Shaw, for example, is not based on anyone, says Jacobson, but she is “inspired by a lot of women, a lot of research, a lot of stories, and then also, I really love infusing my own insecurities, and kind of amplifying things I really have fun playing with.”

For Adams, there is a slightly different challenge. She is playing a character based on two real women who are still alive. “The process of doing that versus something like this is very different, and with Max, even though she’s inspired by a very specific group of women, I still got to create how she speaks and how she moves.”

There is no doubt the television series comes to its story with considerable ambition, and a desire to tell it in a wider, more historically accurate context by including the experience of women of colour from that time. It is, Jacobson says, a more truthful account of the social dynamics of America at that time. 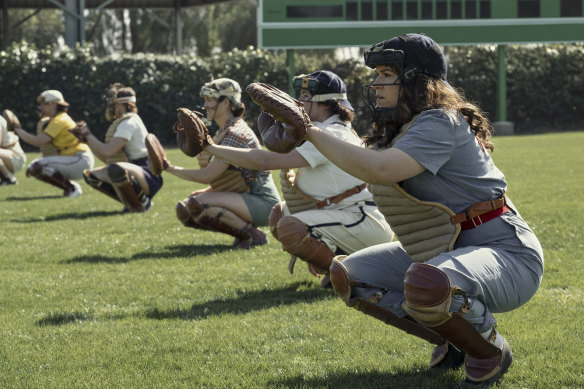 Abbi Jacobson (right) stars as Carson Shaw in A League of their Own.

“It’s what I hope we’re doing,” Jacobson says. “A big fear is that people will see the poster or, just hear that we’re doing this, and [see that] there is a way more diverse cast and be like, ‘They’re doing this woke version of this film.’

“Actually, we’re actually doing a way more realistic version of women playing baseball in the 1940s and I hope people can just watch it because I think that has been a thing that’s been like, how do we really show people that this is a very different telling?” Jacobson says.

“We’re actually telling the authentic version of it,” says Adams. “And there are people that wish we would rewrite history, who want Max to make the team and be able to succeed, but that wasn’t real life.

“It’s important that these stories that we’re telling reflects that because we want people to learn about these women, and Max is based on three real women who played in the Negro Leagues. We want to shed light on their stories. We want to bring those to the forefront and by doing that, and in doing so, we have to make sure that we’re giving as realistic of an account as possible.”

A League of Their Own screens on Amazon Prime Video from August 12.