With NASA aiming to get humans to Mars by 2030, the idea of a long-term settlement on the Red Planet is getting closer to reality and scientists are working on innovated ways to power these habitats.

Researchers in the Netherlands propose using massive kites to harness high Martian winds that would transformed into energy for colonists.

The kite is attached by cable to a spindle. As the kite sails higher, the cable unspools, rotating the spindle around and around and generating energy.

Similar kites are being developed to harness wind power on Earth, but these would be much larger, with a surface area of 530 square feet.

Wind turbines and batteries are too heavy to bring to Mars via rocket, and the planet doesn’t get enough sunlight to consider solar power.

Researchers at the Delft University of Technology propose using a giant kite (pictured) to harness Mars high winds. The kite would be attached by cable to a spindle, and the rotation of the spindle would generate power for astronauts at a base camp

Shipping fossil fuel to Mars would be prohibitive and the planet gets less than half the sunlight of Earth, making solar power ineffective.

In response to a competition hosted by the European Space Agency (ESA), researchers Delft University of Technology in the Netherlands devised a giant light-weight kite that could harness Martian winds as a power source.

‘Generating renewable energy on Mars is technologically challenging,’ they wrote in a proposal posted on the open-source online journal arXiv.

‘Firstly, because compared to Earth, key energy resources such as solar and wind are weak as a result of very low atmospheric pressure and low solar irradiation.’ 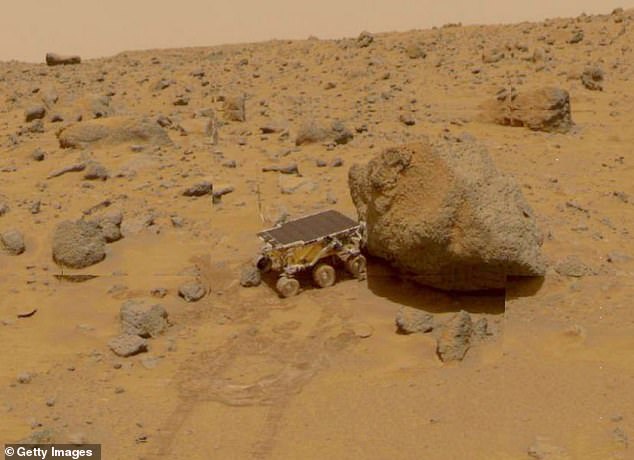 Surface winds move faster on Mars, about 10 to 20 miles an hour on average, though the Viking Landers measured speeds of up to 70 miles per hour during dust storms. Pictured: NASA’s Sojourner rover exploring the surface of Mars in 1997

‘Secondly, because of the harsh environmental conditions, the required high degree of automation and the exceptional effort and costs to transport material to the planet,’ they added.

The kite would be attached to a cable spooled around a spindle—as the robotic system released the kite higher and higher, the rotation of the spindle would generate energy.

Some energy would be spent reeling the kite back in and launching it again, New Scientist reported, but the end result would be a net energy gain.

To address energy fluctuations and balance seasonal changes, additional energy would come from 750 square feet of solar cells, along with lithium-sulfur batteries and by releasing compressed gas taken from Mars’ atmosphere.

The total power supply would be reliable enough for everyday use throughout the Martian year, the team claims, generating some 127 megawatt-hours of energy annually, equal to roughly 75 barrels of oil.

That might not seem like a lot, but a base camp on Mars is only about the size of one household, or ‘four to five astronauts with a small lab,’ Roland Schmehl, an engineering professor at the university, told New Scientist. 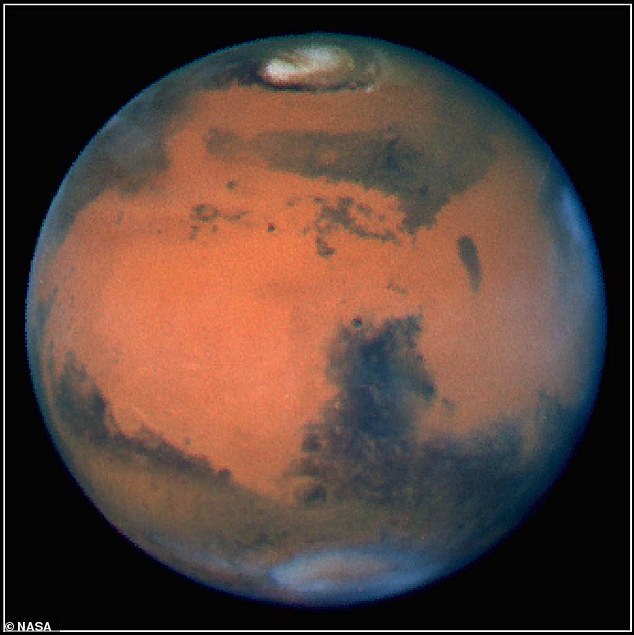 Shipping fossil fuel to Mars would be prohibitive and the planet gets less than half the sunlight of Earth, making solar power far less effective

Surface winds move faster on Mars than on Earth, about 10 to 20 miles an hour on average, though the Viking Landers measured speeds of up to 70 miles per hour during dust storms.

On Earth, that would be considered an ‘extreme threat to life and property’ according to the National Weather Service.

‘The higher wind speeds and lower density to some degree balance out, but not fully, so we also need to increase the surface area of the kite quite drastically,’ Schmehl said.

‘We have seen something similar with the Ingenuity helicopter that is now flying on Mars – this helicopter has much bigger rotor blades than the small drones that you see here on Earth.’

The surface of the kite, or ‘membrane wing’ would be about 540 square feet and the weight of the entire system, including the control unit and ground station, is 640 pounds.

The team predicts the cost of the system, excluding transportation, would be about 8.95 million Euro, or roughly $10.87 million.

But using kites to harness wind energy is no sure thing: In 2020 Alphabet, Google’s parent company, shut down work on Makani, its experimental project to generate power using wind turbines attached to kites.

But that same year, Alphabets’ ‘Other Bets’ division, which Makani was part of, lost $4.8 billion.

Makani CEO Fort Felker lamented ‘the road to commercialization is longer and riskier than hoped.’