Announced on Tuesday, the Game of Thrones showrunners have lined up their first TV project since the HBO fantasy series concluded its run last year. As part of their lucrative deal with Netflix, Weiss and Benioff will partner with Alexander Woo (The Terror: Infamy) to write and produce a series inspired by the The Three-Body Problem trilogy of novels by Chinese author Liu Cixin. 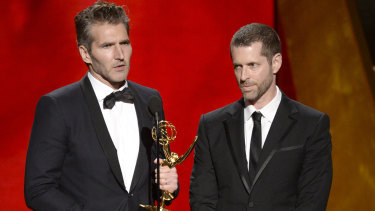 David Benioff and D.B. Weiss have lined up their first post-Game of Thrones series.Credit:Invision

The first book in the Hugo Award-winning series, which is enormously popular in China, opens during the Cultural Revolution, as an imprisoned student uses a covert military operation to make contact with an alien race and encourage them to invade Earth. Like Game of Thrones, adapted from George R.R. Martin's series of epic novels, The Three-Body Problem creates a meticulously detailed alternate universe and is ambitious in scope.

"Liu Cixin's trilogy is the most ambitious science-fiction series we've read, taking readers on a journey from the 1960s until the end of time, from life on our pale blue dot to the distant fringes of the universe. We look forward to spending the next years of our lives bringing this to life for audiences around the world," said Weiss and Benioff in a statement Tuesday.

Rights holders The Three-Body Universe and Yoozoo Group granted the rights to an English-language adaptation to Netflix. Cixin and Ken Liu, who translated two of the novels in the trilogy, will serve as consulting producers.

"It's a privilege to be adapting one of the great masterpieces of Chinese science-fiction," Woo said in a statement. "The Three-Body Problem trilogy combines so many things I love: rich, multi-layered characters and true existential stakes, all told as an elegant and deeply human allegory. I'm thrilled to kick off my partnership with Netflix with this accomplished creative team."

The team of executive producers also includes Rian Johnson, director of Knives Out and Star Wars: The Last Jedi, and Bernadette Caulfield, who worked closely with Benioff and Weiss on Game of Thrones.

The news was announced in a blog post by Peter Friedlander, vice president of original series at Netflix.

"David Benioff, D.B. Weiss and Alexander Woo have experience tackling ambitious sagas over time and space. Rian Johnson and Ram Bergman have long dazzled fans with thrilling and mind-bending epics. They are all fierce advocates of The Three-Body Problem," Friedlander wrote in the post. "As ardent fans, it was especially meaningful to us to get the support of Liu Cixin who created this expansive universe. We all share the same goal: to pay homage to this incredible story and take members on the adventure of a lifetime."