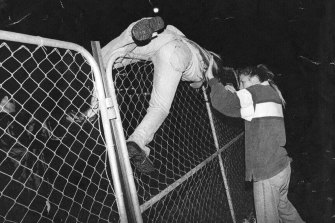 While the attention of police was diverted, a Pearl Jam fan, with a little help from his friends, goes over the top.Credit:The Age Archives

The crowd outside the arena diverted police away from the fence by running between gates until a break was made and fans were able to swarm through.

The police, who had initially drawn batons to drive the crowd back from the fence line, were powerless to stop the crowd as it surged through the break.

The situation threatened to erupt as police, some on horseback, were swamped.

Acting Chief Superintendent Peter Kemp, of B District, said the incident created a doubt about the suitability of the bowl as a rock-concert venue. He said the situation was eventually brought under control without calling in extra police assistance.

Police hit out at concert that turned into a jam 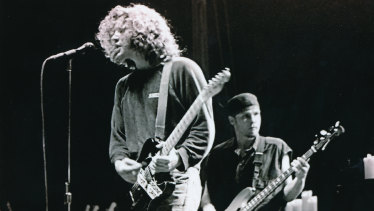 The management of the Sidney Myer Music Bowl yesterday rejected police suggestions that Saturday night’s sell-out Pearl Jam concert — gatecrashed by 15,000 fans — should have been staged at a more suitable venue.

Police said the gatecrashers avoided paying $35 for a ticket by flattening an outer fence to gain entry. “After the concert started, it became obvious thousands of people wanted to get in and (they) brought down the flimsy perimeter fence,” Superintendent Peter Kemp, of Prahran police, said yesterday.

To prevent possible serious injury, police let the non-paying fans join the 13,000 with tickets. “It’s obvious that there are better venues to have that sort of a concert where you can expect… there will be thousands of people intent on coming in,” Superintendent Kemp said.

“And in that context, and in the light of what did occur, we can consider other venues that would be better.”

“A lot of planning went into the event to ensure that the show would be a good night,” she said. “The focus has been on the negative rather than the positive. It was a successful and great show.”

She said the outer fence was a temporary one used for summer concerts and a second perimeter fence was used as a “psychological barrier”.

“At worst there was a breach by eager fans getting into the concert but there were no major injuries which showed the flexibility of the venue . . . and that security did a sterling job,” she said.

Mrs Dancuk said she sympathised with fans who paid “but unfortunately the situation was beyond our control”.

Superintendent Kemp agreed the night was well managed with no fighting, no brawling and no person injured”. Two people were arrested and two have suspected spinal injuries from stage-diving.