A NEW GAME THAT MANY THOUSANDS PLAY 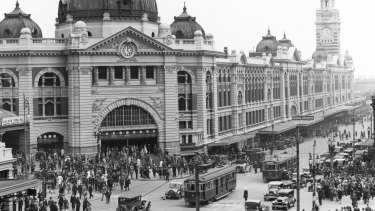 Confirmed optimism is a characteristic which doubtless may be cultivated. Indeed, there are many who pride themselves on their optimism to such an extent that one gradually begins to have grave misgivings as to their mental capacity. They cheerfully inform the world that every failure is but a step towards success, but one needs only to attempt the Flinders-Swanston streets crossing between the witching hours of five and six to realise the terrible absurdity of such a statement.

Between those hours it would appear that the city is in a state of panic; everyone seems erratic. Some dash one way, some another; all are quite regardless of everyone but themselves. It has become somewhat hackneyed to speak about bulls rushing at gates; it would be far more original and correct to refer to human beings rushing to a station. One may be wrong, but to the casual observer it would appear that for at least one hour during the day thousands of Melbourne’s citizens delight to participate vigorously in a queer kind of game, which may conveniently be called “Crossings.”

Should anyone have some time to spare about 5 or 6 p.m. on any night in the week except Saturday and Sunday, when the game is not played to any extent, they should stand at the corner of Flinders and Swanston streets, just outside the Cathedral is a choice spot, and watch. There is absolutely no need to state specifically what to watch, it is all so obvious once you are there. But to prepare the too-nervous who might be taken too much aback by this game, a little description will doubtless be welcomed.

When the hour of five has struck, thousands of quite, decent-looking citizens will be seen approaching Flinders-street from Swanston-street at a smart pace. On the other side of the street, where the station is located, will be observed a crowd slightly fewer in numbers than the one approaching from the other direction. For a moment both sides wait till the referee, a robust gentleman in a matt blue uniform, who stands right in the line of the mercurial tram cars, blows a shrill blast on his and whistle and waves his arms in an amorous fashion. That is the signal they have been waiting for, and—well, the rest happens with startling rapidity. Both sides rush, and according to the best laws of motion, meet in a place called the centre. Once met, or more properly speaking—once they have connected, the scene presented is reminiscent of a dance hall, a boxing ring with the spectators in revolt, the changeover for a division in the House of Legislature, or a tremendous bargain offering of ladies’ all silk ladder-proof hose in a small shop, or an ordinary riot.

To begin with the side that wants to get to the station wins, as it has the greater number. By sheer brute force they gain the ascendency. But as time progresses the sides even up somewhat, and it is then that the science of the game is manifest. At the next signal the customary charge is made. Unfortunately automobiles, bicycles, carts, tram cars and sundries insist upon having a game as well, and there is absolutely no mistake about their enthusiasm. One bump from a tram car is equal to two by an automobile, or three by a dray. If any competitor gets so knocked up that he or she has to be escorted the Morgue, then the referee, who fair, blows his whistle and takes the names of the successful and the unsuccessful contestants. After a few seconds’ respite the game continues and is played with much jest till there are no more contestants. 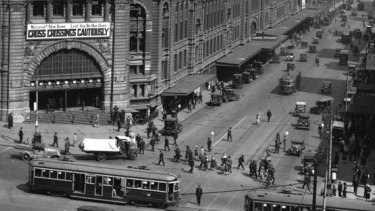 The sign above the clocks at Flinders Street Station in 1929 reads: Motorist! Slow Down, Lest You Be Run Down. CROSS CROSSINGS CAUTIOUSLY. Credit:Herbert Henry Fishwick

Of course the rules should be amended, for as the participants themselves rightly argue, surely it is not consistent with British justice for a ten-ton motor bus to be allowed to bump a ten-stone pedestrian. The bus might get damaged and a ten-ton bus across even the biggest street is a bit of a nuisance. Moreover, women with fifteen children under ten years of age and several parcels as well should be handicapped, because she and her squad can charge en masse to the complete demoralisation of both sides.

Certainly the whole game needs thoroughly overhauling. At the present time confirmed optimism, plus a hide like a rhino, plus a brain like a vacuum are absolute necessities if the game is to be thoroughly enjoyed—otherwise it is much better to stand at the corner and watch this display, which for sheer pep and courage, makes everything else look foolish ; even our legislators who, by the way, are mainly responsible for starting and continuing this extravagant game.