What do Lady Gaga, Cardi B, Beyoncé, Paris Hilton and Lil Nas X have in common — besides their superstar status, that is?

They all turn to 25-year-old Christian Cowan for outfits that are, in his words, “optimistic, fun, adventurous and extra.”

“Fashion is therapy. And if I can just make women around the world — and men, and whoever — just laugh and smile while wearing my clothes, that’s the goal for me,” the British designer told Page Six Style.

Cowan’s cheery approach to clothes clearly resonates with celebs; for proof, look no further than his star-studded Fall 2021 fashion film featuring “RHONY” star Dorinda Medley, “SNL” actors Chloe Fineman and Bowen Yang, Aquaria and Paris Hilton — the latter of whom makes a cameo on an updated version of the bedazzled Motorola Razr phone she made a must-have in the 2000s.

“The Motorola Razr is a phone I died over having when I was a teenager; I felt like the coolest kid in school,” Cowan recalled. “So when I was doing a campaign and collection inspired by that era, it felt like an essential element.”

Below, the fashion protégé tells us about his most memorable celebrity-dressing moments to date, and reveals the unexpected star he’d love to work with next. (Trust us: You’ll never guess who it is.) 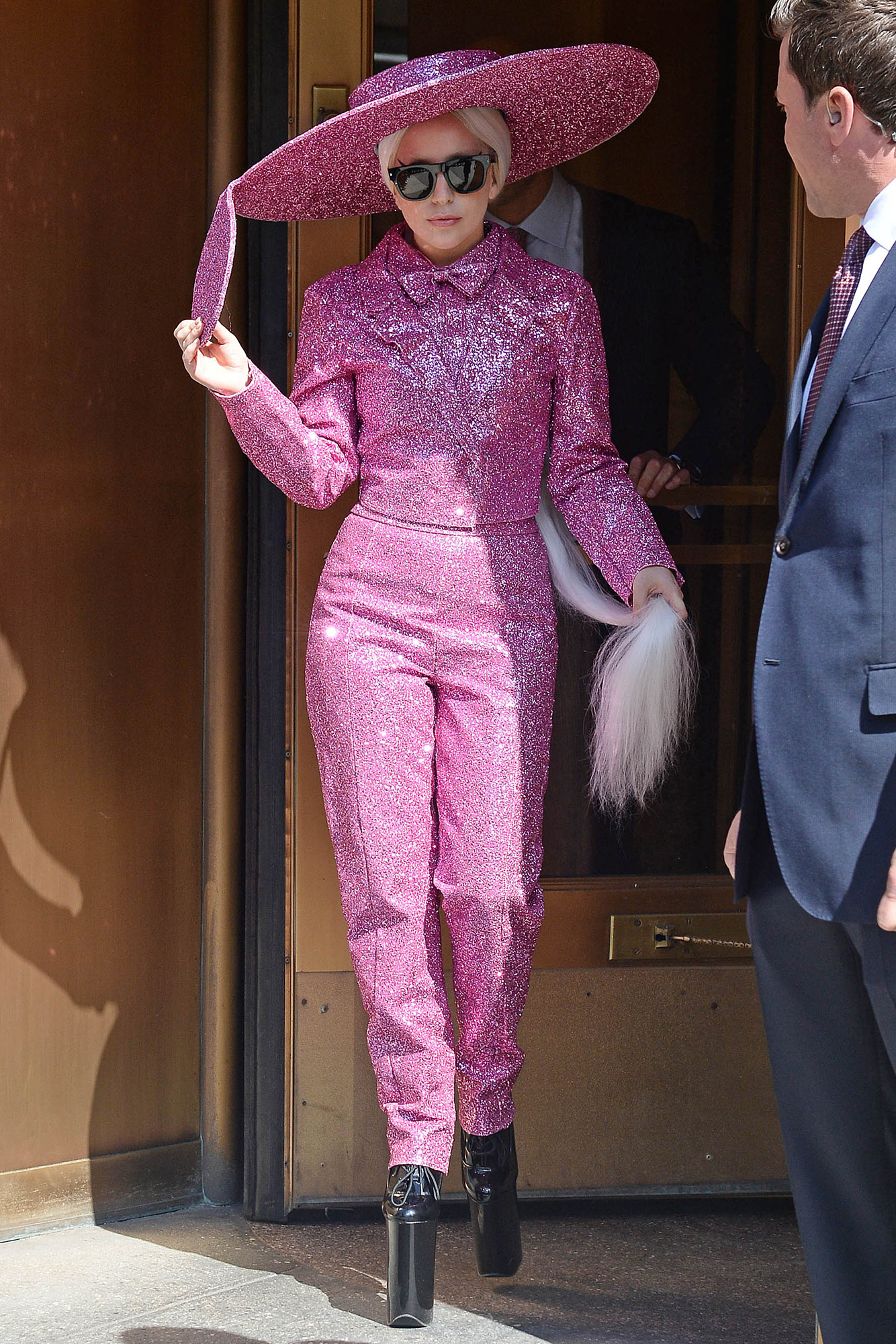 “This will always have a special place in my heart, because it was the first time that a celebrity of any kind had worn something of mine — and out of everyone, it was my icon and idol, Lady Gaga! I remember, I did this terrible little collection, and I didn’t know how to sew back then; this was when I was starting university. So I put it all together by doing dots of superglue. It was garbage.

Somehow, her team saw it online — still not quite sure to this day [how] — and then she wore it in New York, and I got a text congratulating me about it. That will always be such a special moment, because it was so pure; I was just a real excited teenager who was dressing their idol. An all-time moment for me.” 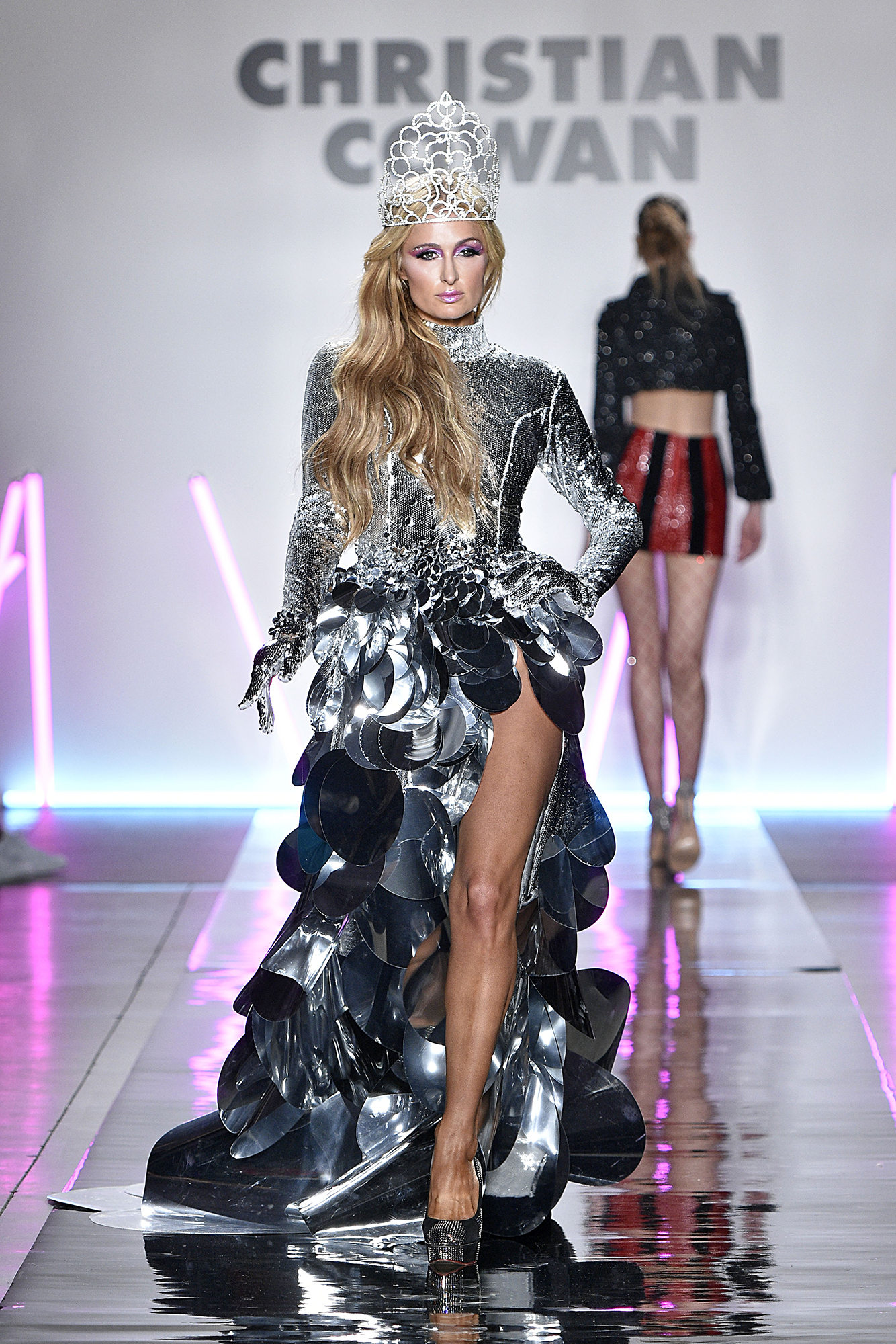 “I had met Paris Hilton at a Paper magazine party, and I had asked for her number and she was just, like, ‘Sure!’ So then when the time [for my first-ever runway show] came, I was like, ‘If you don’t ask, you don’t get, so I’ll just text Paris Hilton and see what she says.’ She was like, ‘When and where?!’

I made this ridiculous dress with small sequins that kept growing and growing [toward the hem], got this massive tiara made, and she just turned it out. I love her so much; she’s one of my favorite people in the industry.” 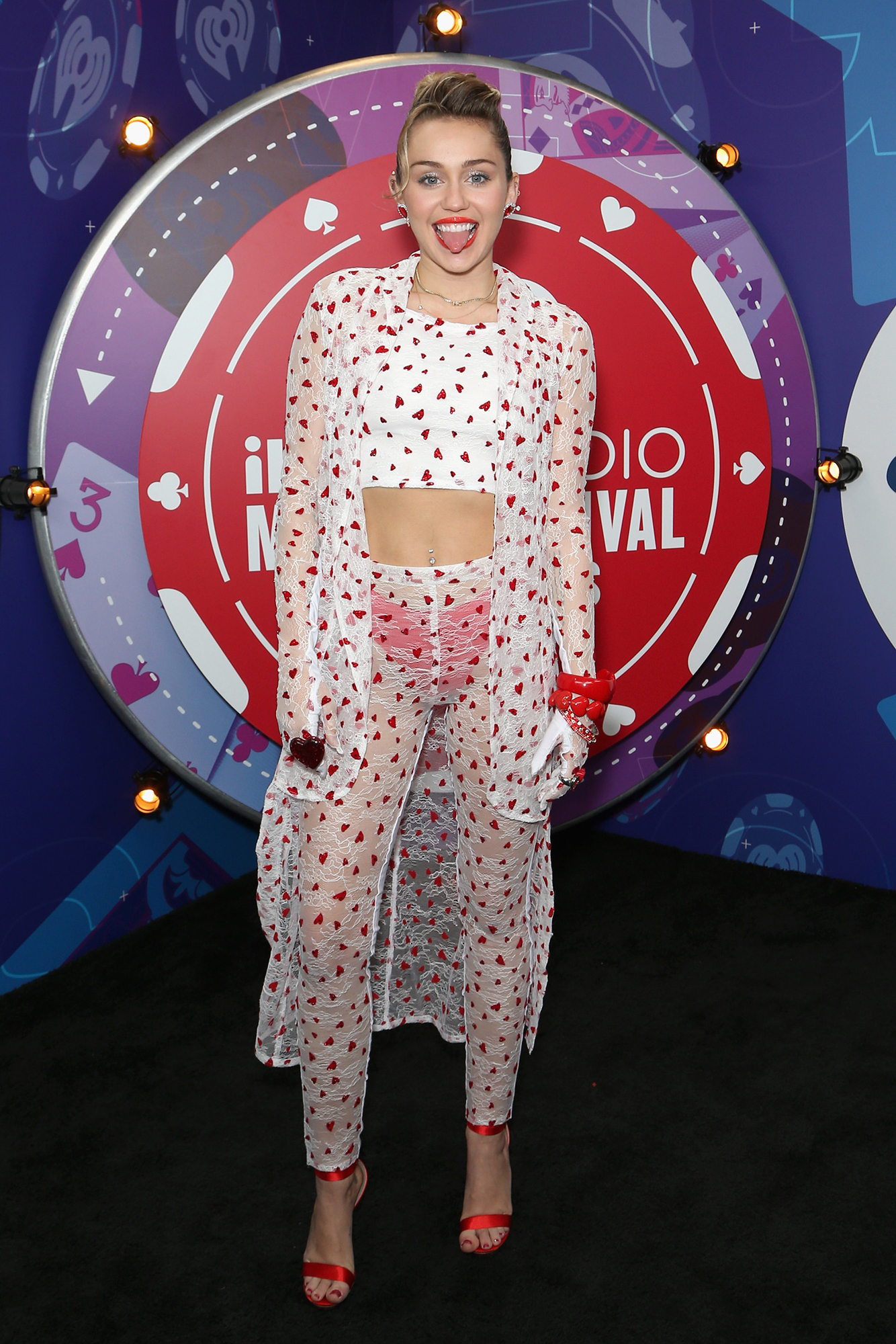 “I was really inspired by Valentine’s Day at the time; kind of always have been. I like the cheesiness of it, but also the real romantic-ness. I did a lace look, and we attached these little velvet hearts, which took forever.

I had just started working with Miley at the time. She was so fun to work with, because she was down for whatever I came up with. And also, she would completely embody the design every time. It never felt like it was wearing her. She was just so cool in it.” 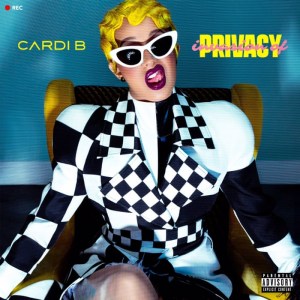 “I loved Cardi and had been dressing her for a minute, for performances and all that jazz. And then Kollin [Carter], her stylist, had seen on my runway that I’d done all these checkerboard looks. They just asked for it — didn’t really say what it was for — and then they send me a video from set of her in the look, like, ‘This is going to be her [“Invasion of Privacy”] album cover!’

I love how they styled it; I love the yellow finger wave from [hairstylist] Tokyo Stylez. It was all so right. We’ve got a huge framed [version] in the office, and it’s always going to be one of our favorite moments.” 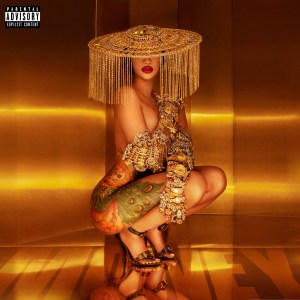 “So the watch gloves have an illustrious history. They were originally meant to be for Beyoncé, and we were going to make them with all real Rolexes. I remember Beyoncé’s team was scouring for any discounted Rolex watches; obviously they had to buy 30 of them, of course, because I was like, ‘I cannot pay that bill!’ That didn’t work out.

Then we sent them to Rihanna, and another star — who I won’t name — had completely destroyed them just before, and had cut them through to try and get them to fit. So it didn’t work. So we made them again, and it worked out for Cardi!” 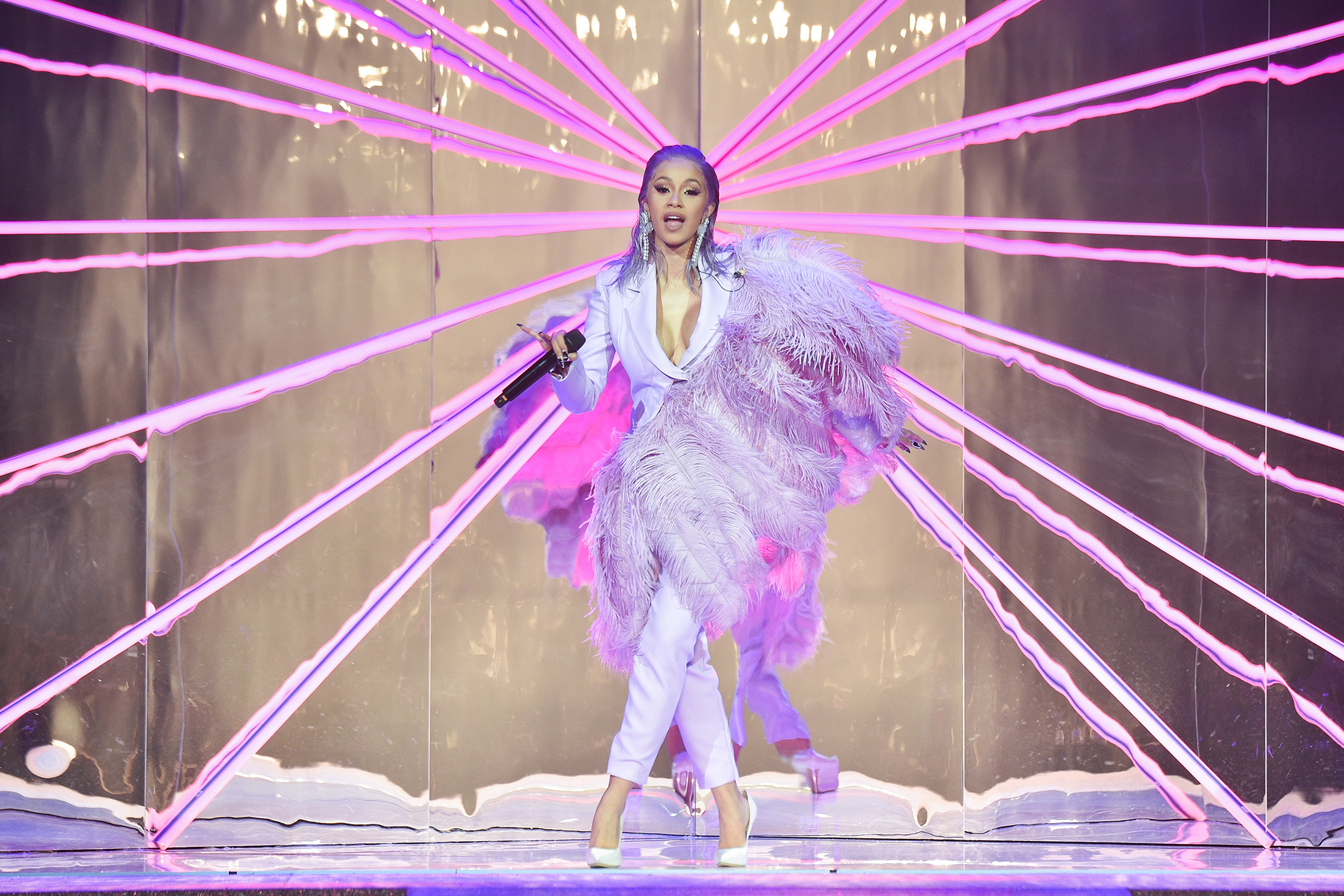 “She was a little bird of paradise in that outfit. It was in my runway show, and it was one of my favorite looks. I texted Kollin immediately, like, ‘Do you need anything?’ It was the night of the show, and he was like, ‘Yes, we need it on a flight.’

They sent someone on a flight with it to Paris, and she wore it the next day, the full look. I love that she was in an outfit from New York Fashion Week at Paris Fashion Week the next day.” 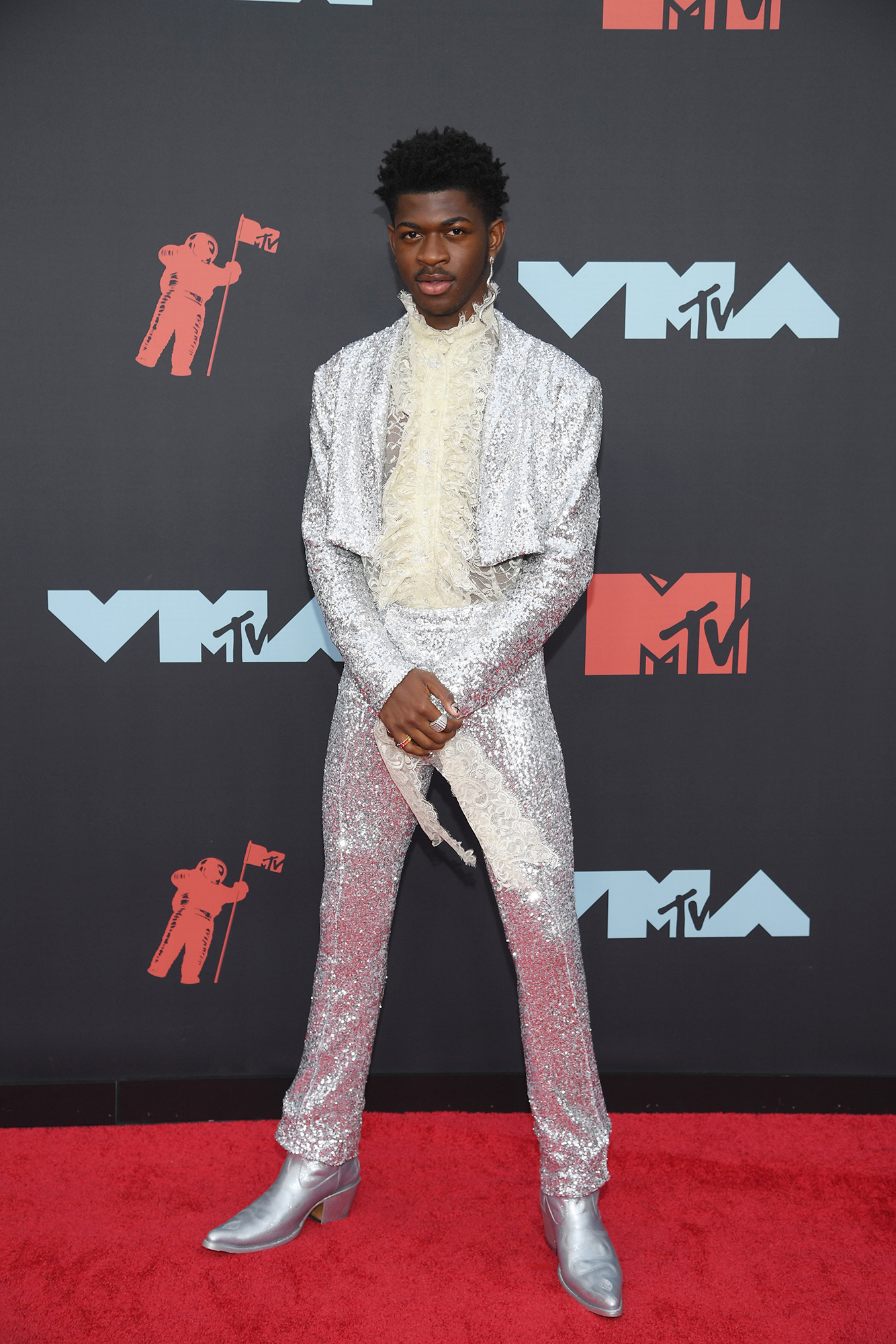 “So ‘Old Town Road’ was smashing it [at the time], and I saw this guy and was like, ‘Hold on. He’s rap, he’s country, and he’s queer? This is everything that we love in one.’ And so I reached out to his team; I don’t usually reach out, but I was like, ‘We have to work with him.’

I spoke to Nas and we immediately had chemistry. His stylist, Hodo [Musa], was like, ‘Let’s do Prince.’ We don’t do much menswear, and it was fun to be able to do something that was flamboyant but had masculinity to it, and paid homage to someone we all know and love. And I went to the VMAs with them and had the funnest time.”

“J.Lo, in my eyes, is like the supreme pop star. So when they asked for the dress, I was so excited. And then by some weird chain of events that were out of my control, somehow Mariah Carey also wore the same dress!

It was this wild moment, to have both of them wear it, but I was so honored and flattered. It’s so exciting when you get that seal of approval from an icon you loved in your childhood and your adult years. Like, my next dream is that I want to work with David Attenborough; that would make my life. My two childhood icons: J.Lo and David Attenborough.”

“He is one of the greatest living fashion designers; he made ready-to-wear at Louis Vuitton and did all these iconic moments. I got a message from a famous magazine editor telling me that Marc had told them about me — I was so excited.

So I just messaged him asking, ‘Would you want to be in my Lil Nas X collaboration campaign?’ And shockingly, he was like, ‘Yeah, just tell me where.’ I just had to sort out a few COVID tests for him, and he turned up! That was one of my favorite moments ever, because while I’m so lucky to have all these musicians wear our stuff, to have an icon in your own industry give you that seal of approval … it was just everything I needed.”