Fashion designer and former Spice Girl Victoria Beckham has taken a Sydney-based skincare company to court over two trademarks featuring the letters "VB", arguing consumers would be confused into thinking she endorsed the products. 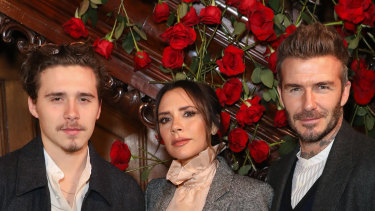 Victoria Beckham, flanked by her son Brooklyn and husband David.Credit:WireImage

VB Skinlab, which is based in Homebush West, is seeking to register the trademarks "VB Salon" and "VB Skinlab" in Australia to market beauty salon services, skincare products and cosmetics.

Ms Beckham, who uses her initials to market a luxury womenswear range and a line of cosmetics developed in collaboration with beauty behemoth Estée Lauder, unsuccessfully opposed the registration of the trademarks last month.

IP Australia – the government agency that administers intellectual property rights – described Ms Beckham in a decision on March 9 as "an individual from the United Kingdom who is a well-known figure in the fields of music (being a former member of the Spice Girls) and fashion".

It said it was "not satisfied that any confusion" would arise between the Sydney company's logos and Ms Beckham's own VB trademark.

The businesswoman and former pop singer also sought to oppose the registration of the trademarks on the basis the Sydney company was acting in bad faith.

IP Australia rejected that argument, saying it could not conclude the company was seeking to take advantage of the reputation of Ms Beckham's trademark or acting in a way that was "unscrupulous, underhanded or unconscientious".

It was also "unpersuaded" that the company's use on its website of a photo "of an attractive female model with long dark hair" was "in any way a reference" to the star.

"Furthermore, the mere fact that a cosmetics company has used an attractive female model with long dark hair in connection with their products is hardly a basis to assert bad faith," the decision said. IP Australia ordered the star to pay the company's legal costs.

Ms Beckham has lodged an appeal in the Federal Circuit Court.

In documents filed in court, lawyers for Ms Beckham say she has "extensively used and promoted the VB word mark in Australia and overseas in relation to various beauty and fashion related goods, including cosmetics".

They say the Sydney company's VB logos "would be likely to deceive or confuse Australian consumers … into believing" its products were sold or "sponsored" by the star.

They also say the company was aware of Ms Beckham's use of the VB trademark and "intended to benefit from falsely representing to consumers that it was associated with [her]".

The Sydney company sought to register its trademarks "in circumstances where a reasonable person standing in its place adopting standards of acceptable commercial behaviour would not have done so", Ms Beckham's lawyers argue.

Ms Beckham has asked the court to set aside IP Australia's decision, reject the company's application to register the trademarks, and order the company to pay her costs of the appeal and the original hearing.

The dispute is listed for a preliminary hearing in the Federal Circuit Court on April 22.