‘Forgotten’ organ in the chest that helps regulate the immune system may be key to preventing miscarriage and diabetes in pregnant women, study finds

A little-known organ in the chest called the thymus may be crucial in protecting pregnant women and their unborn children, a study shows.

The organ is found in the centre of the chest and scientists now believe it plays a key role in regulating the immune system during pregnancy.

Growing a foetus for nine months poses a huge immunological challenge, and experts have never fully understood how the female body copes.

Researchers now say that protecting the thymus and ensuring it functions properly during pregnancy could prevent miscarriages and diabetes in pregnant women. 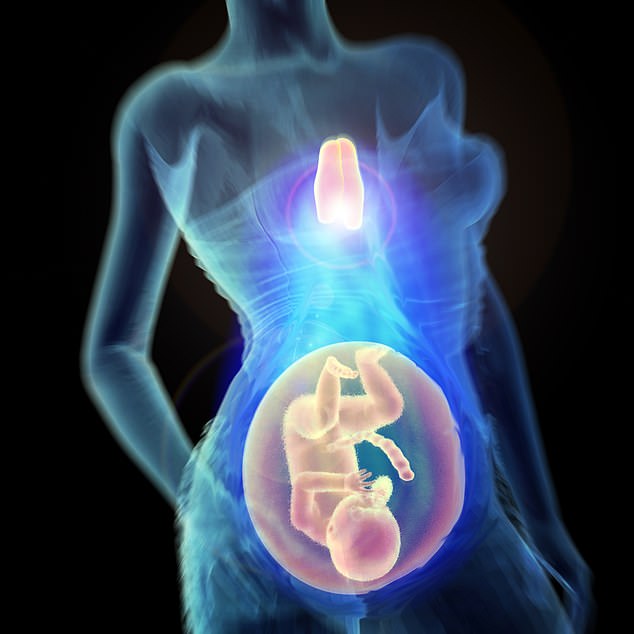 A little-known organ in the chest called the thymus may be crucial in protecting pregnant women and their unborn children, a study shows (stock)

More than one in five pregnancies in the UK ends in miscarriage and 15 per cent of women worldwide suffer from gestational diabetes.

Researchers found that, during pregnancy, the female body’s sex hormones instruct the thymus to produce more Treg cells which are specifically designed to keep the immune system in check and not attack the growing foetus.

The study, published in Nature, reveals the key receptor on the surface of the thymus which controls this process is called RANK, and not all women have it.

Senior author professor Josef Penninger, then at the Austrian Academy of Sciences said: ‘We knew RANK was expressed in the thymus, but its role in pregnancy was unknown.’

Studies in a lab were done on mice where the RANK receptor was removed to see what impact it had on pregnancies.

Lead author Dr Magdalena Paolino at the Karolinska Institutet in Sweden says the removal of the RANK receptor meant there were fewer Tregs made by the thymus.

‘That resulted in less Tregs in the placentas, leading to elevated rates of miscarriage,’ she adds.

Even if the pregnancy was successful and a mouse gave birth, the pups were found to be at increased risk of diabetes and being overweight later in life.

But the good news is topping up RANK-deficient mice with Tregs from those with normal pregnancies reverses ‘all their health issues’, the researchers say.

Women who suffered from diabetes during pregnancy were then analysed by the researchers.

Like the mice, pregnant women with diabetes had a lower number of Tregs in their placentas.

This suggests the forgotten organ plays a vital role in ensuring women have a healthy pregnancy.

Professor Penninger said: ‘The thymus changes massively during pregnancy and how such rewiring of an entire tissue contributes to a healthy pregnancy has been one of the remaining mysteries of immunology.

‘Our work over many years has now not only solved this puzzle – pregnancy hormones rewire the thymus via RANK – but uncovered a new paradigm for its function.

‘The thymus not only changes the immune system of the mother so it does not reject the foetus, but the thymus also controls metabolic health of the mother.’

The findings mean new treatments which target the thymus could ensure a healthy pregnancy, especially among women with diabetes.

Co-author Dr Alexandra Kautzky-Willer at the Medical University of Vienna said: ‘The discovery of this new mechanism underlying gestational diabetes potentially offers new therapeutic targets for mother and fetus in the future.’

Pregnant women who catch the coronavirus do not pass it on to their unborn children, according to data from a new study.

US-based researchers followed 64 women who tested positive for SARS-CoV-2, the virus which causes COVID-19, between April 2 and June 13.

None of the babies tested positive for Covid-19 after they were born, and no coronavirus was detected in the placenta.

While the Harvard academics warn the small sample size makes it impossible to rule out that some pregnant women could pass the virus to their children, it shows the natural defences of pregnancy fend off the virus, they say.

The expecting mothers were all in their third trimester and had the virus in their lungs, nose, and throat, but not in their bloodstream or placenta.