Katie’s all about being Katie in her first “Bachelorette” promo.

Fans got a peek at the upcoming season starring Katie Thurston — a fan favorite from “Bachelor” Matt James’ season — in a teaser released by ABC on Sunday.

“I am who I am and I want to meet someone who knows who they are,” Thurston is heard saying in the clip.

To really get her point across, the 30-year-old bank marketing manager wears a T-shirt emblazoned with the words “Be a Katie.”

Thurston and fellow former contestant Michelle Young were both named in March as upcoming “Bachelorettes,” with Thurston’s season debuting this summer and Young’s in the the fall. The dual announcement came after a season that was marred in controversy stemming from racially insensitive behavior on the parts of contestant Rachael Kirkconnell and host Chris Harrison. 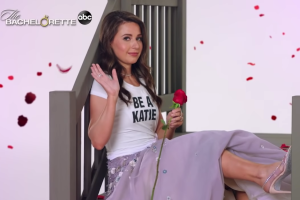 With Harrison taking a leave from the show, ABC announced in March that former “Bachelorettes” Kaitlyn Bristowe and Tayshia Adams will be hosting Thurston’s season.

But for Thurston, the on-air drama centered on her speaking out against accused bullying going on as the women vied for a relationship with James. In the new ABC promo, a flashback to one of those moments is captured, with Thurston saying, “I’m not going to sit here and let mean girls be mean girls!”

Following her elimination in Week 6 when James said he and Thurston would be better off as friends, much of Bachelor Nation rallied around Thurston to be named the next “Bachelorette.”

The new season is set to premiere on June 7.