A Southern California firefighter who suffered critical burns while battling the Silverado Fire in October was released from the hospital Wednesday, CBS Los Angeles reports.

Dylan Van Iwaarden, 26, was one of two firefighters injured on the job. The Orange County Fire Authority firefighter was discharged Wednesday afternoon to the rehabilitation unit at UC Irvine Medical Center.

He has spent 114 days at the Orange County Burn Center in Santa Ana and underwent 17 surgeries, OCFA said. At one point he was in a medically induced coma.

As the 26-year-old was pushed on a gurney along the sidewalk in front of the OC Burn Center at Santa Ana’s Orange County Global Medical Center, dozens of members of his department, doctors, nurses, family and friends clapped and cheered.

“It was a tragic event, but I’m getting better and I’m gonna be back there and excited to help serve citizens again of Orange County,” said Van Iwaarden during a news conference Wednesday afternoon.

“I think it is remarkable and a lot of it is the nurses and the staff and Dylan himself,” said Dr. Andrea Dunkleman, Medical Director of OC Burn Center.

Van Iwaarden and 31-year-old Phi Le were injured while setting backfires to slow the spread of the blaze. Le is still recuperating, but there were no immediate details about his condition.

It forced 90,000 people to flee their homes. Remarkably, no homes were destroyed.

Southern California Edison notified California state regulators that its equipment may have been to blame for sparking the fire. 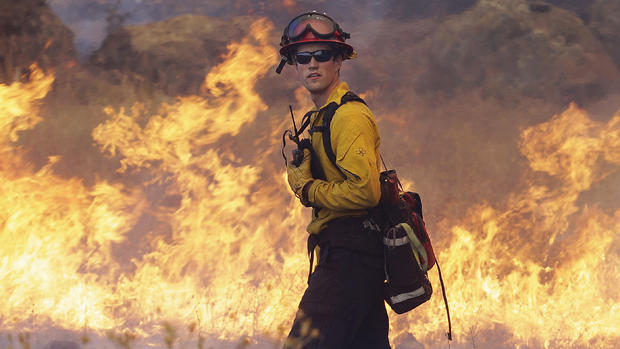