Firefighters tackling the Caldor Fire now have priority over available resources as the blaze has become “the number one fire in the country right now in terms of priorities for values at risk,” according to El Dorado National Forest supervisor Jeff Marsolais. Burning only 11 miles southwest of the Lake Tahoe area, local officials said they worry about the fire’s spread.

“This fire has just simply outpaced us,” Marsolais said Tuesday night at a community briefing. “We emptied the cupboards of resources, and the local fire chiefs of Amador and El Dorado counties sent every resource they could, and no matter how many folks we tried to get on it, it just continued to outpace us.”

As of Wednesday morning, the Caldor Fire has burned 126,182 acres and is only 11% contained, Cal Fire reports. The massive blaze has already damaged 461 residences, 34 structures, 11 commercial properties and 165 minor structures, with more than 17,000 structures still in its possible path. The cause of the fire remains under investigation. Fire officials expect to fully contain it by August 31.

“[This is] still a very large fire that we’re still going to have a lot of work to do to get around,” Cal Fire Amador-El Dorado unit chief Mike Blankenheim said.

The fire’s behavior in the area has fluctuated since it began on August 14, Marsolais said. A change in wind pattern Tuesday evening decreased fire activity to allow firefighter teams to strengthen and improve certain control lines, Cal Fire said. However, the agency reported spot fires along the southwest and the northeastern areas of the wildfire and around its perimeter.

Officials said stopping the eastern spread of the fire is a “huge priority.”

“We’re putting every available resource we have on that,” Blankenheim said. 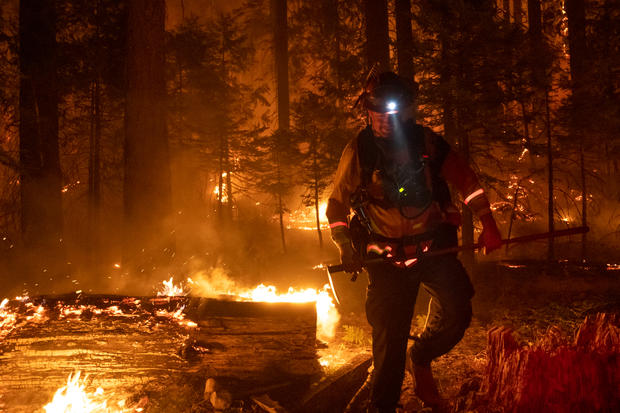 On Monday, Chief Thom Porter said the Caldor Fire was “knocking on the door to the Lake Tahoe basin.”

Smoke from the wildfire has caused air quality in some areas of the basin to be designated as hazardous — the highest level of concern on the air quality index scale. Officials have advised residents in polluted areas to remain inside and to stay informed on air quality and the wildfire’s developments.

And while the current evacuation orders issued to thousands of residents do not include Lake Tahoe residents, officials said they are watching the area and will issue warnings in the basin should evacuations be ordered between Twin Bridges and Echo Summit.

“We will be involved in this until the end,” Lake Valley Fire Chief Brad Zlendick said. “This will end too. We’ll get through this.”