The FBI publicly requested help Sunday in identifying seven men seen beating a Washington, D.C., police officer in now-viral footage captured during the deadly pro-Trump insurrection on Jan. 6. The FBI shared photos of the men on Twitter, claiming each played a role in assaulting Officer Mike Fanone while fellow rioters stormed the Capitol to derail the certification of the presidential election, which Trump lost.

Footage from the riot shows a violent mob beating the officer down a flight of stairs, at times dragging him by the collar and striking him with an American flag. After the assault, Fanone told CNN his attackers zapped him with a stun gun several times and he recalled bystanders yelling for them to “kill him with his own gun.” Images of his attack are among the wealth of video and photos that have emerged since Jan. 6, making the full scope of the riot’s violence more clear.

Multiple insurrectionists on the scene during the storming of the Capitol died, authorities said. Two Capitol Police officers who responded that day have also died, including Officer Brian Sicknick, who was struck in the head with a fire extinguisher, and Officer Howard Liebengood, who died by suicide the weekend after the attack. 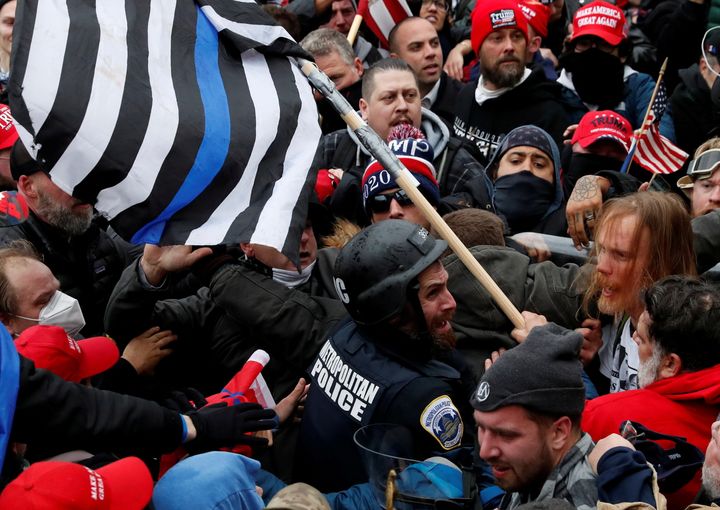 On Wednesday, the House of Representatives voted to impeach Donald Trump for a historic second time, handing down a single charge ― “incitement of insurrection” ― after he encouraged rioters to march to the Capitol to prevent Congress and Vice President Mike Pence from certifying his election loss. “We will never give up, we will never concede,” Trump told soon-to-be rioters the morning of Jan. 6. All Democrats and 10 Republicans in the House voted for impeachment.

Federal authorities are currently in the early stages of what they say will be a sprawling, monthslong criminal investigation into the riot. Some of the most recognizable insurrectionists have been identified and arrested already, but authorities have also largely acknowledged an unavoidable roadblock in bringing many more of them to justice: Most of the rioters who stormed the Capitol were allowed to leave the scene without being arrested.