‘He looks just like William’: Royal fans are struck by likeness between ‘stoic’ James, Viscount Severn, 14, and the Prince of Wales as he walked behind Diana’s coffin aged 15

The Queen’s grandson James, Viscount Severn, remained stoic as he stood guard over Her Majesty’s coffin tonight, prompting some royal fans to draw comparisons between him and a young Prince William.

James, the 14-year-old son of Prince Edward and the Countess of Wessex, joined his sister Lady Louise Windsor, 18, and cousins for the 15-minute vigil at Westminster Hall.

He remained composed throughout the ceremony, displaying a maturity far beyond his years. 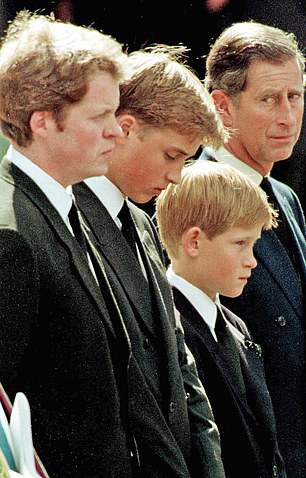 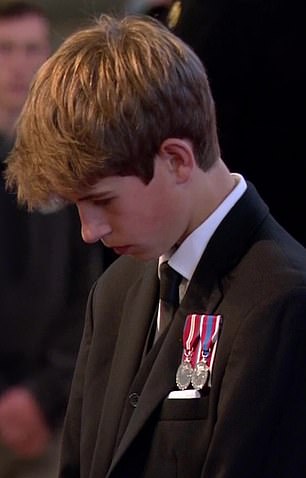 The Queen’s 14-year-old grandson James, Viscount Severn, remained stoic as he stood guard over Her Majesty’s coffin tonight (right), prompting some royal fans to draw comparisons between him and a young Prince William at his mother’s funeral in 1997 (left) 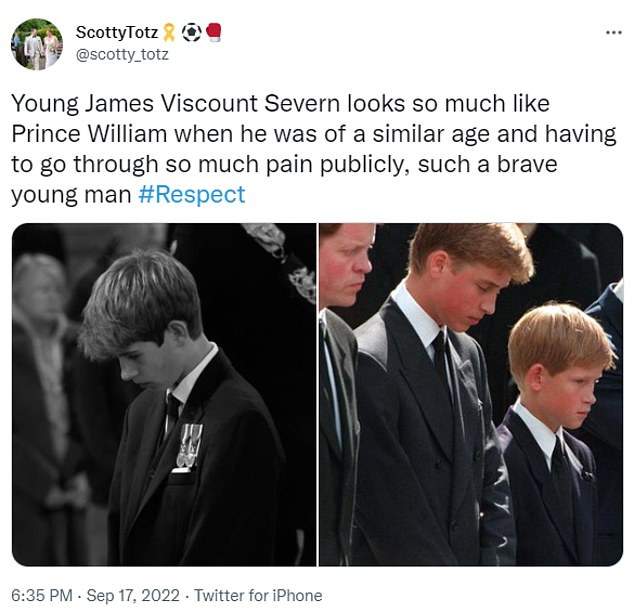 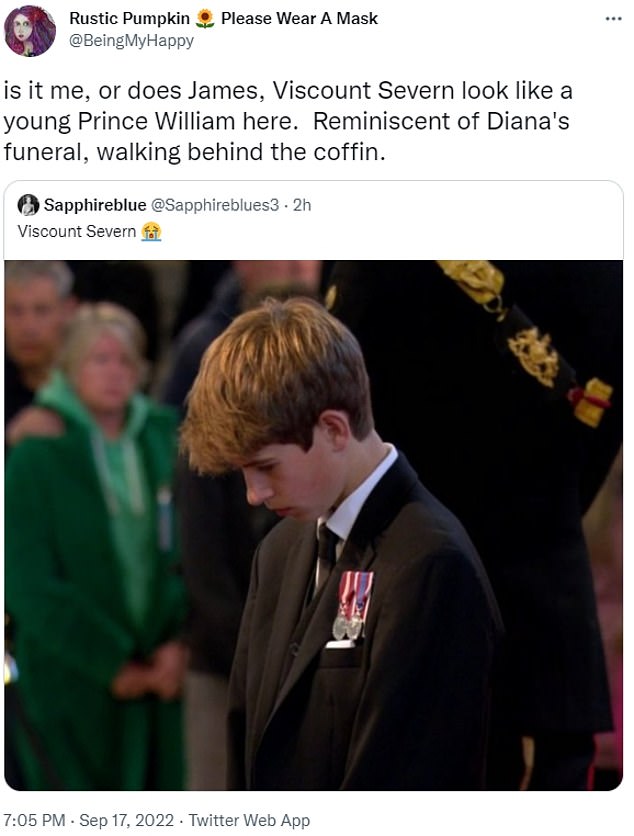 The display, and his sandy blond hair, prompted some royal watchers to point out a likeness between James and a 15-year-old Prince William at Princess Diana’s funeral

The display, and his sandy blond hair, prompted some royal watchers to point out a likeness between James and a 15-year-old Prince William at Princess Diana’s funeral.

One tweeted: ‘Young James Viscount Severn looks so much like Prince William when he was of a similar age and having to go through so much pain publicly, such a brave young man #Respect.’

Another posted: ‘Is it me, or does James, Viscount Severn look like a young Prince William here. Reminiscent of Diana’s funeral, walking behind the coffin.’

A third added: ‘James Viscount Severn looks so much like: William, Edward, Phil, Harry, even the Queen. My eyes were glued to him that whole time.. at 14 to do that so stoically, fair play.’ 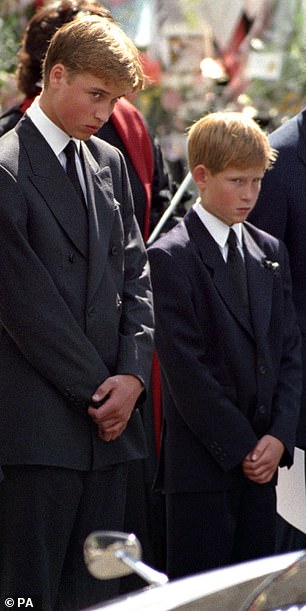 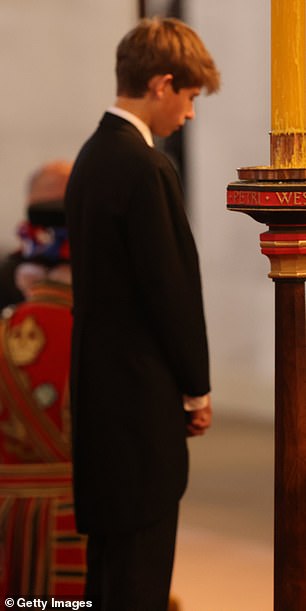 Prince William, then 15, with Prince Harry at their mother’s funeral in 1997. Right, James tonight 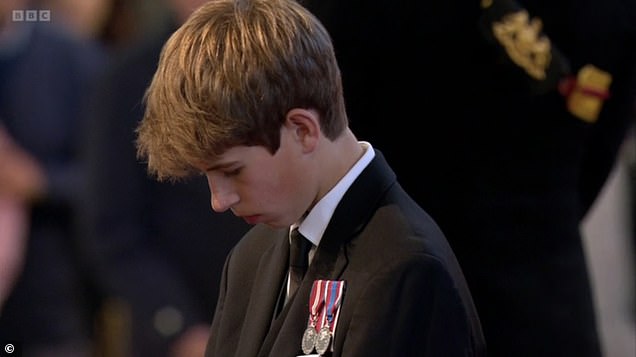 James Viscount Severn, 14, looked sombre as he stood vigil beside his grandmother’s coffin this evening at Westminster Hall 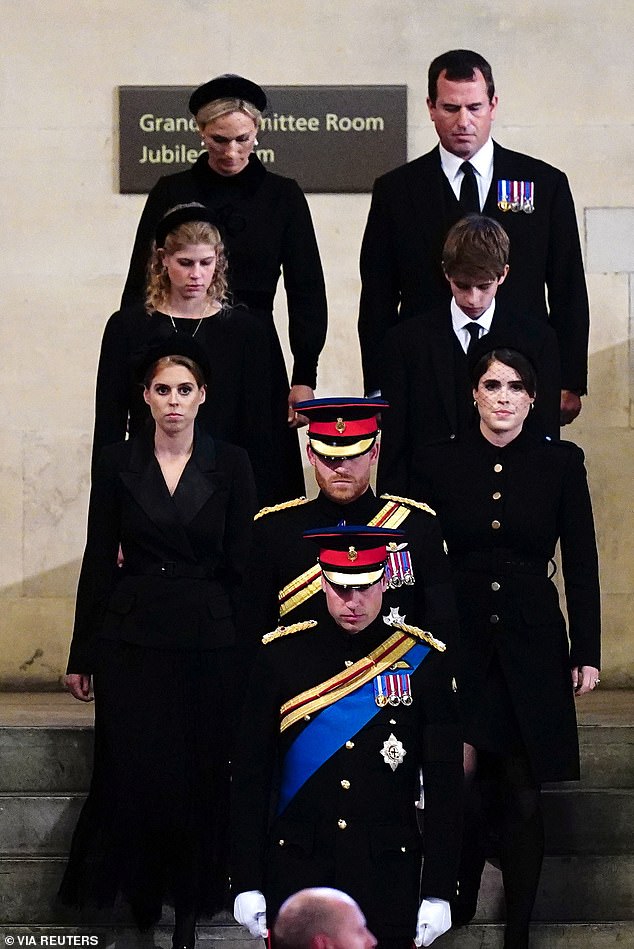 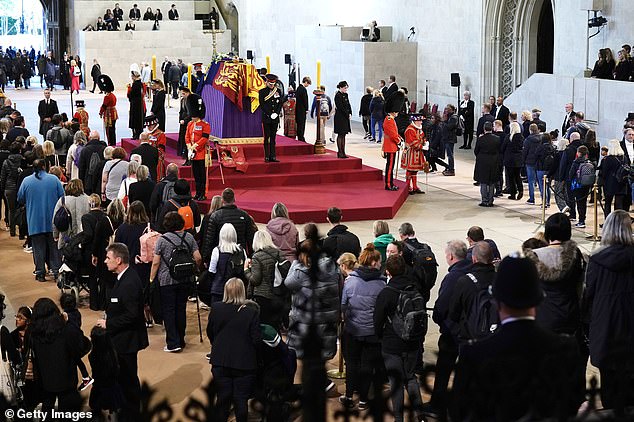 The Queen’s eight grandchildren – including Prince Harry in his military uniform – stood by her coffin in her honour as she lay in state in Westminster Hall as weeping mourners filed past tonight.

Brothers William and Harry – both dressed in uniform – stood guard at the Queen’s lying in state in Westminster Hall on Saturday evening as a stream of mourners filed past after queueing for hours. 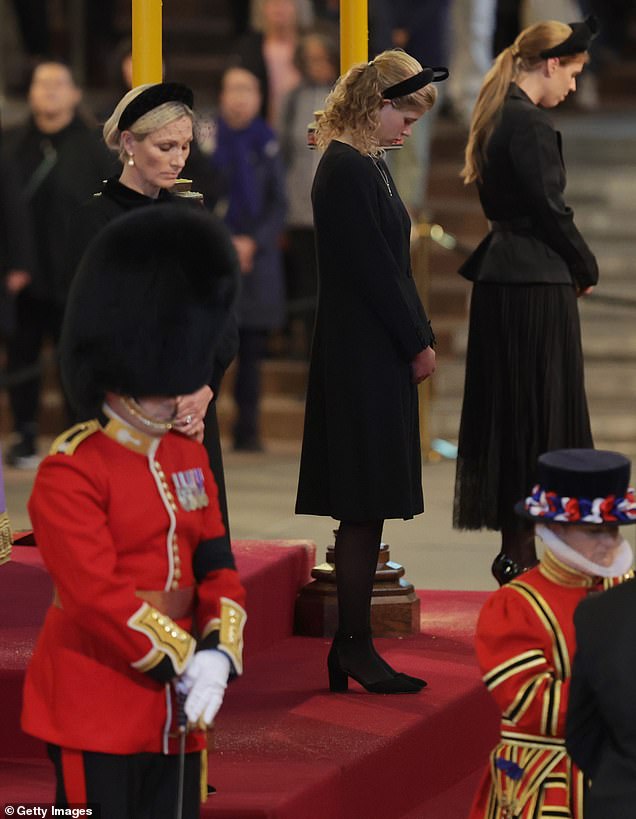 Zara Tindall, Princess Beatrice, Princess Eugenie and Lady Louise Windsor followed in the footsteps of Princess Anne by taking part in a ceremony that has been traditionally reserved for male members of the Royal Family

Princess Eugenie joined her sister and cousins at the vigil (left). Right, Prince Harry was permitted to wear military dress 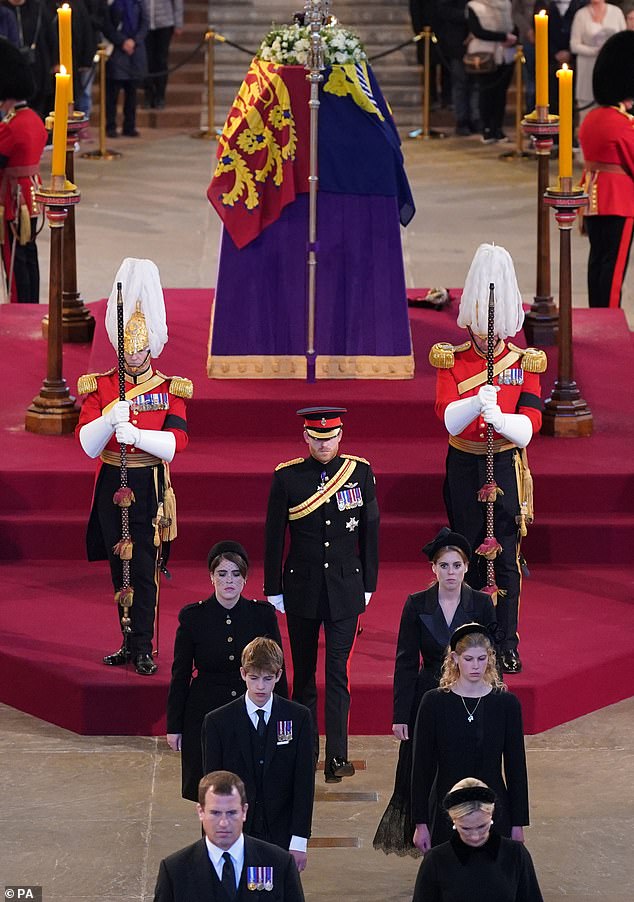 Prince Harry, who saw action on the front line during two tours of duty in Afghanistan, has previously been denied the chance to wear his military uniform as he publicly mourns, because he is no longer a working royal.

But royal sources said the King decided his youngest son could wear uniform for the vigil.

Despite being a former Army officer, Harry has been in civilian dress for official events this week, including walking behind the Queen’s coffin on Wednesday. 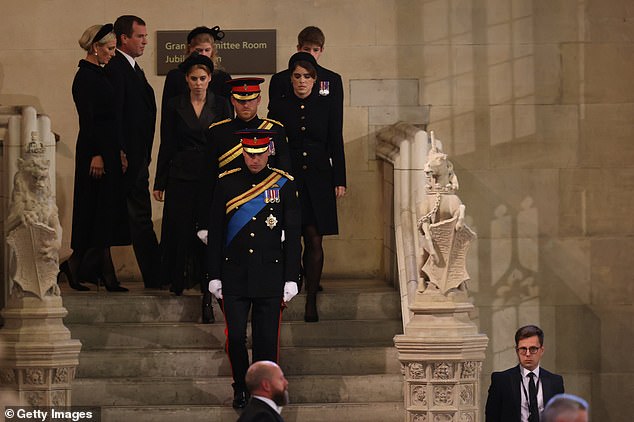 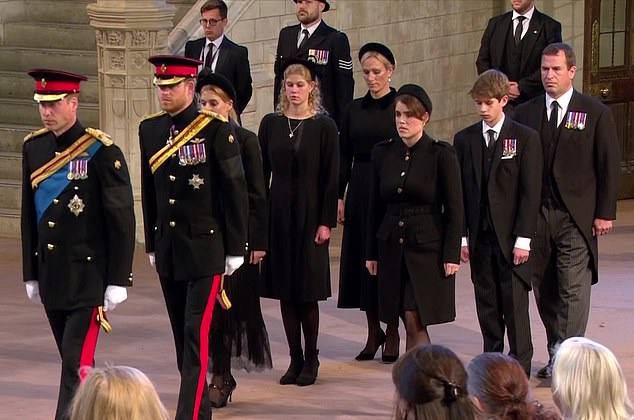 Prince William was wearing the Blues and Royals, No.1 Uniform, The Garter Sash, The Garter Star, Golden, Diamond and Platinum Jubilee medals and RAF Pilot Wings.

The brothers were joined in their silent tribute around the coffin by cousins Zara Tindall and Peter Phillips, Princesses Beatrice and Eugenie, and Lady Louise Windsor and her brother Viscount Severn.

The young royals, led by Prince William, were in position at the top of the grand committee staircase in the corner of the vast hall at 5.58pm.

At 6pm, the tapping which signifies the changing of the guard sounded and William began walking down the steps, one at a time, followed by Harry, then Beatrice and Eugenie side by side, Louise and James side by side, and Zara and Peter also side by side.

Silence fell as members of the public looked on, with the only sound being the grandchildren’s footsteps on the stone.

The Prince of Wales stood with his hands clasped in front and his head bowed.

Louise and James’s parents, the Earl and Countess of Wessex, looked on from a platform facing the coffin.

Members of the public continued to file past while the Queen’s grandchildren stood guard, with some women wiping tears away from their face as they left the hall.

At 6.15pm, the tapping sounded and the grandchildren ended their vigil.

Prince William led the group away from the coffin, followed by Zara and Peter, Louise and James, Beatrice and Eugenie, and finally Harry.