With two small children, Sean and Jenny Huang are hoping to move closer to family and will take their home at 15 Valentine Grove, Armadale to auction next Saturday with a price guide of $2 million to $2.2 million.

The government’s decision to lift stamp duty will put pressure on them to buy their next place before the tax hike comes into force. 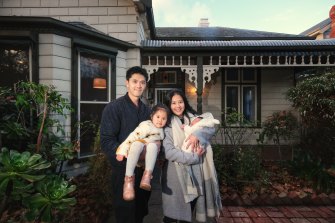 Sean and Jenny Huang and their children in front of their Armadale home which they hope to sell next Saturday.Credit:Luis Enrique Ascui

“It would make sense to try and buy something before the cut-off,” Mr Huang said.

“If we sold next weekend and didn’t buy something soon, we’d have to pay [more] stamp duty when the person who buys our place won’t.”

Ms Huang hopes other buyers will feel the same way and be keen to snap up their listing. “Hopefully that plays to our advantage,” she said.

Their agent, Kay & Burton’s Darren Lewenberg, said he understood the need for budget repair but it seemed real estate was seen as “low-hanging fruit”.

“It is going to cause nervousness, nervousness causes paralysis, and paralysis means it will have a direct effect on the market,” Mr Lewenberg said.

“The way properties are going now, $2 million – these are people who either held properties for a long, long time as an investment… or people who took a long time to earn the money for a deposit.”

Mr Peddie and his wife Faye sold their Lorne apartment and a small apartment in South Yarra to buy their $2.15 million home in Wallington, north of Ocean Grove, where they plan to grow their own vegetables and ride on the local bike trails.

But because they signed the contracts and paid their deposit in early April, it’s unlikely they will face the new ‘premium stamp duty rate’ that will apply to all contracts signed after June 30.

But Mr Peddie believes taxing properties over $2 million is no longer a hit at the rich.

“To suddenly turn around and say you are filthy rich if you are going to buy a property worth $2 million, you just need to see what the price of properties are, $2 million is no longer a Toorak mansion,” Mr Peddie said.

“So when they say he [Treasurer Tim Pallas] is having a hit at the rich, that is, quite frankly, bullshit, he is having a hit at average, working-class Australian people because that’s the sort of prices they are having to pay to get into reasonable suburbs. They are not buying Toorak mansions, that is for sure.”

The Peddies are in their late 70s and budgeted to also buy electric road bikes to ride from their new place to visit their daughter in Queenscliff – they hope to keep those plans should they avoid the extra stamp duty.

“At our age, this will be the last house we have, and we were budgeted very carefully,” Mr Peddie said.

Craig Whatman, the head of Pitch Partners Melbourne transaction taxes team, is still doing the sums on the tax hikes, but he is concerned about what a rise in land tax will do to landowners and the availability of land for new houses.

“The liability crystallises at the point that the rezoning happens, but it appears the payment is effectively deferred until the next transaction that occurs in respect of that land,” Mr Whatman said.

“Some of these farmland lots of blocks that we deal with go from being worth $3 million overnight to $30 million and you are talking about a tax on 50 per cent of that gain.

“No one has the cash to pay that, but it also raises the question of whether this will discourage people from actually dealing with that land from a transactional point of view.

“It is unfair to be taxing landowners further on property when Victoria already has the highest stamp duty rates in the country,” Ns Nield said.

“It is also short-sighted to be adding a greater tax burden on housing when it already contributes up to half of the state’s revenue each year. Equally, the activity generated from residential development supports jobs and economic activity and is key to supporting all Victorians as the state recovers from the economic shock of COVID-19.

“New taxes like these are passed on in higher land prices for all and stamp duty inhibits people from selling properties to allow for new homes to be built – it has direct impact on new housing affordability.

“Changing the goalposts after property has been purchased is unfair. It seems this will particularly impact in regional Victoria – as some urban growth land in Melbourne may be exempted.

“These increasing taxes will impact land prices and home buyers at all levels at a time when housing affordability has fallen, particularly in the regions.”