A third-tier side reaching the FA Cup final – unthinkable right? Well, it came so close to happening.

On this day 23 years ago, then Second Division side Chesterfield’s incredible run culminated in a semi-final meeting against Premier League Middlesbrough at Old Trafford.

It turned into one of the all-time classic matches in the competition, featuring extra-time drama, six goals, one red card and a major refereeing controversy in which the officials failed to see the ball cross the line for a goal.

BBC Sport tracked down three Spireites players from that game, watching the highlights with goalscorer Jamie Hewitt, as well as speaking to Jon Howard, whose ‘goal’ was not awarded, and goalkeeper Billy Mercer.

The build-up: ’13 April is a date I cannot forget’

Chesterfield have since dropped down the divisions, now struggling at the wrong end of the National League.

But the Derbyshire town did see happier footballing times, particularly during the 1996-97 campaign, when they almost stunned English football by reaching the final of the world’s oldest club competition.

To this day, no club from the third tier or below has ever reached the FA Cup final.

Hewitt: “You do think what could have been but it was a fantastic time in my career and for the football club. If we had got to a final it would have been historic and you start thinking about how we would have got on against Chelsea at Wembley. “

Howard: “It was the highlight of my career having played mainly at League One and League Two level. Getting to the FA Cup semi-final was something special and 13 April does stick in the head.

“They are good memories but they are bittersweet at times. People remind me of it and it is bitter to look back on when you think what might have been.

“It is something you can watch online and I bring it up and show my son and daughters that I played in an FA Cup semi-final.”

Reaching Old Trafford: ‘We had our own memorable day there’ 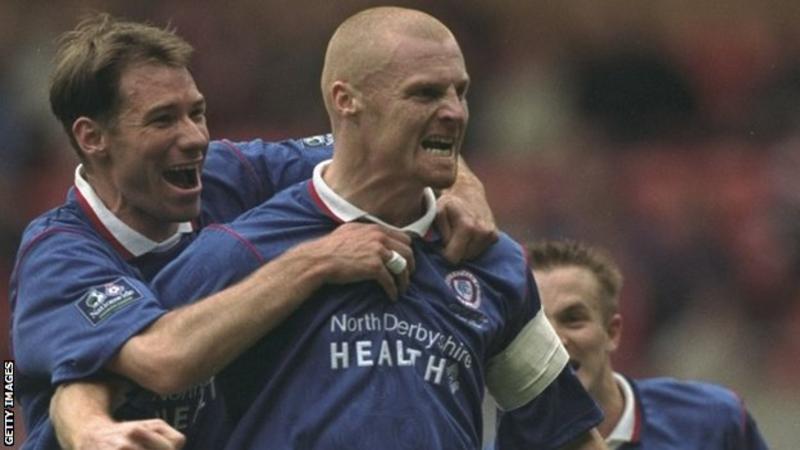 Starting from the first round, Chesterfield had won six games on their way to the last four, knocking out Nottingham Forest, who were then in the Premier League, and First Division high-flyers Bolton, with striker Kevin Davies netting a hat-trick against a side he would go on to join later in his career.

The prize was a meeting with top-flight Middlesbrough and their array of foreign stars, with the match taking place on a neutral ground at Manchester United’s Old Trafford.

Mercer: “Before the game, we went away for a couple of days to a hotel in Manchester and it was very relaxed. One of my memories on the day of the game was looking at the newspapers and all the pundits were predicting 3-0, 4-0 or 5-0 for Middlesbrough.

“It gave us a bit of a push. The team spirit was incredible.

“Old Trafford was one of the big grounds I wanted to play at and, two days before the game, we got the offer of doing a tour of the ground.

“We all said ‘we are not going there to just make up the numbers’ and declined on the offer.”

Hewitt: “The team talk from our manager, John Duncan, and assistant, Kevin Randall, was much like any other game, they were meticulous in their planning.

“We had done plenty of preparation leading up to the game and, just before, John said, ‘go out, enjoy the occasion. You are good enough and don’t let yourselves down’. It was one of the more low-key team talks because we were not expected to win the game.”

Howard: “You are looking at world class, international players before the game and hoping it was not going to be embarrassing.”

Half an hour from glory: ‘What suit will I wear at Wembley?’

In a goalless first half, Boro had Slovakian defender Vladimir Kinder sent off, before Chesterfield went 2-0 up after an hour, through Andy Morris and skipper Sean Dyche’s penalty.

Howard: “You start thinking of strange things. I was thinking what suits we might get to wear at Wembley and what we will do after the game.

Hewitt: “I think we were starting to believe this could happen. We were in dreamland because nobody had given us a chance of winning.”

The goal that never was 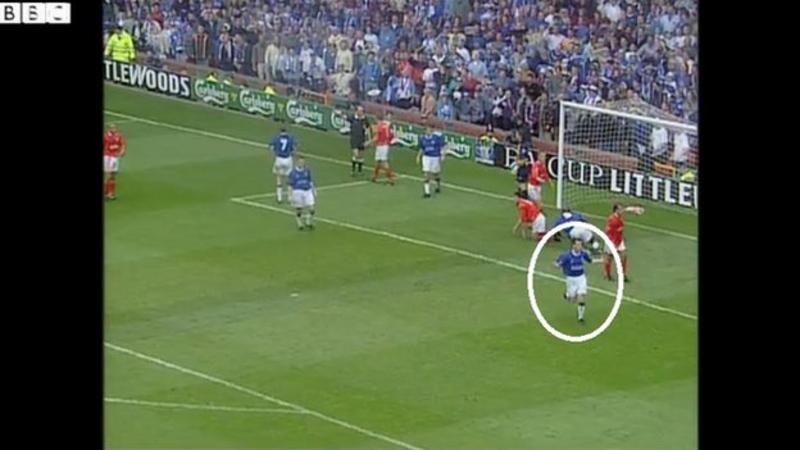 Italy international and Champions League winner Fabrizio Ravanelli pulled a goal back for Boro before the game’s contentious moment. Howard found the ball at his feet in the box and smashed a shot, which hit the underside of the crossbar and appeared to cross the line.

Howard: “I caught it too well and it thundered against the underside of the crossbar and bounced over the line and came back out again. If I had mishit it, it would have bobbled into the back of the net.

“At the time, I did not realise it had gone over the line. I tried getting to the rebound. We looked across at the linesman and he was running back to the halfway line.

“In recent years, especially with goalline technology, we would have been awarded the goal.

“I think the referee thought the linesman had flagged for a foul or offside, if we had got him across we would have got the goal. We just did not challenge it.

“David Elleray was one of the top referees in the country at the time and for him not to at least go and confer with his linesman was very disappointing.

“It was Sky Sports commentator Martin Tyler who told me after the game that my shot had crossed the line and I was like, “oh my god, I cannot believe it”.”

Hewitt: “I saw the incident quite well and you can see on the highlights that I appeal with my arms up in the air to the linesman. He gives the goal and runs off back to the halfway line.

“The referee did not look at him so the linesman came back to his position and carried on. He should have kept his flag up. He should definitely have been stronger.”

Mercer: “My mind always goes back to the goal that was not given. If we had gone 3-1 up then maybe I would have started thinking about the final.

“The boys were a real honest group and you knew something had gone off. Seeing the replay back after the game, it becomes even more obvious.”

The late equaliser and celebrations 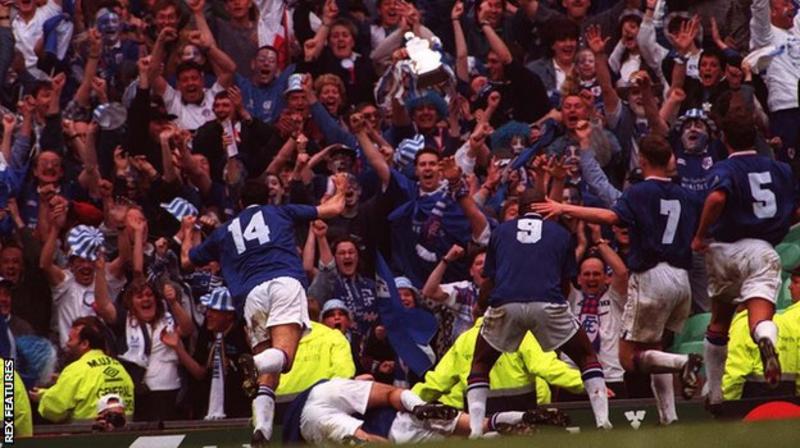 Instead, Boro equalised through Brazilian midfielder Juninho’s penalty, before taking the lead in extra-time through Italian defender Gianluca Festa. Chesterfield were not done though and Hewitt equalised with a minute of the game remaining to spark wild celebrations.

Hewitt: “It was one of my best headers. There were great celebrations in front of our fans in the Stretford End.”

Howard: “At 3-2 down in extra-time, I thought we were down and out.

“But when Jamie popped the header in in the last few seconds we felt we could have another crack at them. The atmosphere in the dressing room after the game was very subdued, people were just exhausted and someone sent some champagne in but not many touched it straight away.” 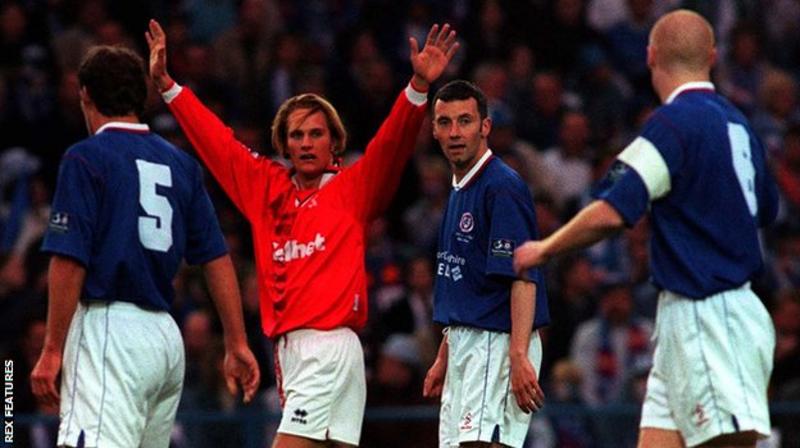 The side got a heroes reception on their return to Chesterfield, but their big chance had gone and they were well beaten 3-0 in the replay at Hillsborough.

Hewitt: “We got a lot of messages and congratulations from people and, when we got back to Chesterfield, people were lining the streets to welcome us back. When we left Manchester and came back through Stockport we were stopped at some traffic lights and people came pouring out of a pub and gave us a round of applause. It was amazing.

“The club took us away on holiday to Jamaica after our achievements that season so we ended up watching the final together in a hotel at 9am. I am still in contact with a few of the players and we have a few reunions.”

Howard: “I did see Elleray again a few years later, where I was at an FA Cup semi-final and he was assessing the referees.

“I went and spoke to him and there was actually a piece in the matchday programme from our 1997 game.

“I told him I was the player that had hit the shot and he was very apologetic.”

Mercer: “Everyone loves an underdog and people love the stories of a little club taking on the big boys. Deep down a lot of people wanted us to win that game.”