‘Extra-terrestrial equivalent of the Rhine’: Astronomers uncover first evidence of a major RIVER on Mars that flowed across the surface of the Red Planet 3.7 BILLION years ago

Astronomers have uncovered the first evidence ever of a river on Mars which flowed across the red planet for more than 100,000 years.

Permanent marks left behind in exposed cliff faces more than 650ft (200m) high reveal the river was a deep, fast-flowing torrent of water which existed year-round.

It proves Mars had abundant liquid water and a stable atmosphere capable of supporting life around 3.7billion years ago, when the solar system was in its infancy.

Researchers from the University of Utrecht looked at high-resolution images from orbiters circling the planet and found evidence of the river.

It is believed the river was constantly shifting and creating sandbanks similar to the Rhine, or other rivers in Northern Italy. 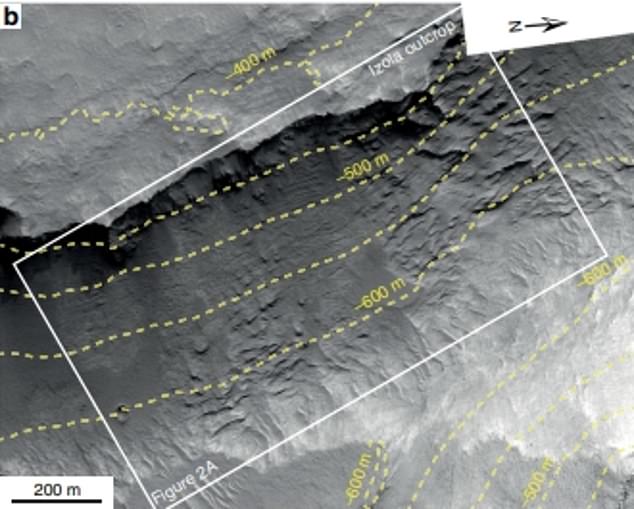 Pictured, high resolution imaging science experiment (HiRISE) and contour lines. This shows the slope of the cliff which is around 200m high (650ft) 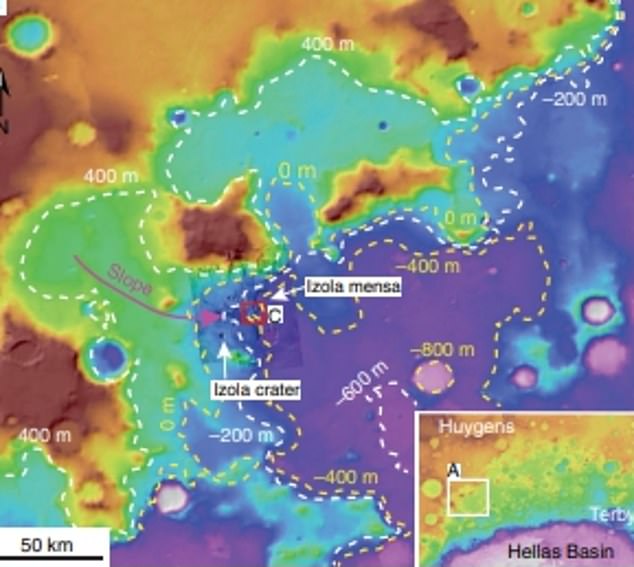 Pictured, a topographic map taken of the surface of Mars from Mars Orbiter Laser Altimeter (MOLA). The red square is the outcrop of cliff analysed in the study which revealed the presence of an ancient river

The large cliff face, located at a place called at Izola Mensa in the northwestern rim of the Hellas Basin in Mars’s southern hemisphere, painted the picture of the river.

Soft sedimentary rocks were scrutinised in detail, with advanced imagery on the satellites providing resolution of up to an inch (25cm) per pixel.

Marks in the rock are identical to those seen on Earth when water flows past rock for long periods of time.

Due to the age of the cliffs the astronomers are unable to predict how long the river would have been, saying erosion makes the current surface vastly different to the one that existed more than three billion years ago.

Dr Francesco Salese, who led the research, says analysing the marks in the rock was easy with the correct technology, but quips that it wasn’t quite as simple as ‘reading a newspaper’.

‘The extremely high resolution imagery allowed us to “read” the rocks as if you are standing very close to the cliff,’ he adds.

‘Unfortunately we don’t have the ability to climb, to look at the finer-scale details, but the striking similarities to sedimentary rocks on Earth leaves very little to the imagination.’

Laboratory studies reveal microbes can live in extremely hostile environments such as 100 per cent hydrogen.

This finding has implications in the search for extraterrestrial life and expands the number of planets in which life could thrive to include those previously disregarded.

Many planets have been found with an atmosphere made almost entirely of hydrogen, but they have been previously ignored in the search for life.

Experts now say these worlds should be scrutinised in detail to see if they harbour lifeforms.

Professor Sara Seager from the Massachusetts Institute of Technology (MIT) believes astronomers should broaden their horizons as they scan the cosmos for life.

She said: ‘Microbes can survive and grow in a 100 percent hydrogen atmosphere. We should expand the types of planets we consider worth searching.’

Order and positioning of rocks has long been used on Earth to allow geologists to trace the history of our planet’s waterways.

These tried and tested methods were applied to the Mars imagery.

William McMahon, a geologist at Utrecht University, says: ‘Now we have the technology to extend this methodology to another terrestrial planet, Mars, which hosts an ancient sedimentary rock record which extends even further back in time than our own.’

The study, published in the journal Nature Communications, proves Mars had its own version of the water cycle, driven by rain.

This, the researchers say, backs up previous research which claims Mars had a prolonged presence of water.

‘Such perennially flowing rivers would require an environment capable of maintaining large volumes of water for extensive time-periods, and almost certainly necessitated a precipitation-driven hydrological cycle.

‘This kind of evidence, of a long-lived watery landscape, is crucial in our search for ancient life on the planet.’