Daniel Andrews knew for months he was losing his most senior and trusted public servant, Chris Eccles.

Although Mr Eccles’ immediate resignation as Secretary of the Department of Premier and Cabinet was prompted by the belated production of phone records for the hotel quarantine inquiry, his exit had been quietly planned since at least July.

It was back then, when Victoria’s second wave of COVID-19 infections was starting to crest, that Mr Eccles took two weeks of unexplained leave from one of the most critical jobs in the state. 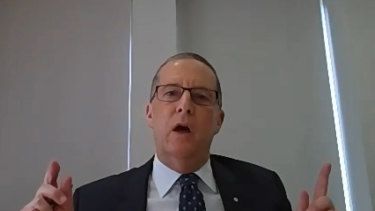 Department of Premier and Cabinet secretary Chris Eccles testifies to the Coate inquiry.

Mr Eccles had sold his Melbourne house and needed a few days to shift his primary residence to the south coast of NSW, where he is planning to retire with his partner.

What was intended to be a quick trip across the border turned out to be a protracted stay after the NSW government closed the Victorian border, forcing the experienced mandarin to self-quarantine before he could travel south.

Mr Eccles’ mysterious absence from Treasury Place in the middle of the pandemic prompted speculation – and some criticism – within the public service but, as the bureaucrat ultimately in charge of Victoria’s COVID-19 response, he couldn’t make known his reasons for fear of revealing his plans and being seen as a lame duck.

In the months since, Mr Eccles has been stuck in personal and professional limbo; physically separated from his partner, who stayed in NSW, and counting down the last of six years spent at the coalface of the Andrews government.

Now that it has arrived, his departure significantly reshapes how Victoria is governed. 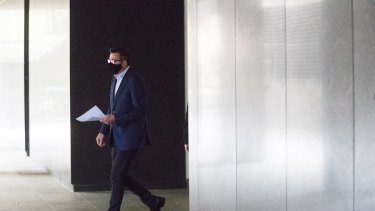 In Labor's first term, Mr Eccles and former minister Gavin Jennings were the rhythm section in Mr Andrews' band. Where Mr Jennings was responsible for herding ministers and maintaining Cabinet's relationship with senior public servants, Eccles ensured that the machinery of government – the bureaucratic departments and agencies – delivered the government's agenda.

In more recent years, as the relationship between Mr Andrews and Mr Jennings cooled, Mr Eccles personally championed some of the Premier's pet projects, such as Victoria's relationship with China’s Belt and Road program. His exit, following that of Mr Jennings in March, will further concentrate power in the personal office of the Premier. 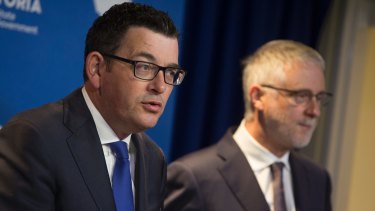 Drummer in the brand: former minister Gavin Jennings accompanies the Premier at at 2017 announcement. Credit:Chris Hopkins

The demise of Mr Eccles has also caused other senior bureaucrats to reflect on their professional mortality and perhaps, question the value of loyalty to such a politically ruthless Premier. As one Labor insider said of the now-vacant, DPC secretary post: "It is a very unattractive job.''

The first was when he couldn’t recall speaking to police chief Graham Ashton at a critical moment on March 27, when private security guards were being considered for use in the nascent hotel quarantine program.

The second was when he couldn’t recall whether he passed on to the Premier an offer about two weeks later from Prime Minister Scott Morrison for ADF personnel to help with the program.

Rightly or wrongly, this was seen as a dutiful public servant shielding his political master at a cost to his own personal standing and reputation. His absence of recall stopped the decision to use private security guards from being left at Mr Andrews' door.

Those same senior bureaucrats would have been aghast when Mr Andrews in his subsequent evidence to the inquiry hung Mr Eccles out to dry. They now see how it has ended.

In conversations with a tight circle of friends and trusted colleagues since the Premier’s testimony, Mr Eccles has made clear his intention to go.

Before the production of phone records confirming he did speak to Mr Ashton on the fateful day in question, he was planning to stay in his job until the November 10 Victorian Budget, which is four days after Jennifer Coate hands down her final report.

As soon as he saw the line confirming his two-minute conversation with Mr Ashton, he recognised that his position was untenable, irrespective of what he and the former police chief discussed. Mr Andrews made no attempt to dissuade him.

Sources familiar with the matter confirmed that, if not for the extraordinary circumstances of the pandemic, Mr Eccles would have probably quit in June this year.

After 13 years spent running premiers’ departments in South Australia, NSW and Victoria, Mr Eccles knows it is time for someone else to do the job. A part of him is relieved to be going.

He is also dismayed at what the Coate inquiry unearthed; a systemic, bureaucratic failure to respond to the many signs emanating from Melbourne’s quarantine hotels that something was going badly wrong.

When Victoria was preparing for the first wave of the pandemic, Mr Eccles unveiled what should have been his career masterpiece; an extensive radical restructure of the Cabinet, ministry and bureaucracy into COVID-19 “missions’’ to best address the twin health and economic challenges of the virus.

The Coate inquiry exposed unintended consequences of those reforms; blurred lines of accountability and inadequate operational oversight of a quarantine program which spread rather than suppressed the virus and led to the deaths of nearly 800 people.

Mr Eccles ends his 35-year public service career shaken more by this than his own treatment.