They refused to give in to the woke mob: DOMINIC SANDBROOK on Oxford college’s decision NOT to topple Cecil Rhodes statue

Three cheers for Oriel College, which after years of dither and delay, has finally come to the only possible decision about its little statue of Cecil Rhodes.

Nobody thinks Rhodes was a saint. Entrepreneurs and empire-builders rarely are. But as prime minister of the Cape Colony, founder of the De Beers diamond empire and the father of Rhodesia, he was a titanic figure in British and African history.

A vicar’s son from Bishop’s Stortford, Hertfordshire, Rhodes became one of the richest men in the world, set up Oxford’s Rhodes Scholarships and paid for Oriel College’s grand Rhodes Building which stands on Oxford’s High Street. 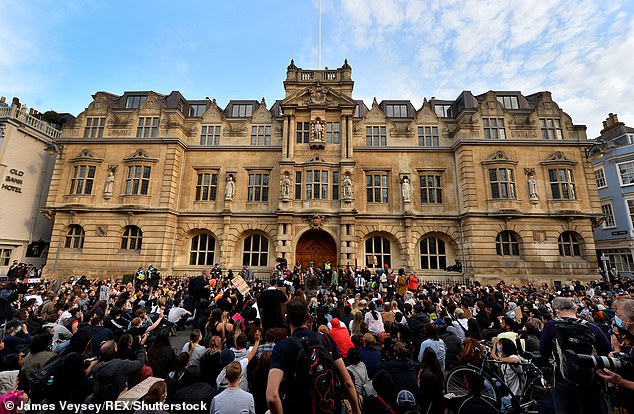 And there, if you flatten yourself against the far wall and look very hard, you might spot the surprisingly small figure of Rhodes himself – the statue at the centre of this ridiculous fuss.

For Oriel’s governing body, the whole business has been a nightmare. After being harangued for months by mobs of Left- wing activists, the college launched a ‘consultation’ about the statue’s future – which many people saw as the first step to bringing it down.

To anybody who has followed similar cases in the last few years, the pattern was very familiar. First, a handful of students, activists and celebrities would sob and scream. Then, provided they had screamed long and loudly enough, the authorities would limply give in, choosing to appease the mob rather than to stand up for their own institutions.

But in Oriel’s case, the college authorities had reckoned without their alumni – the real heroes of the story. Almost overnight, charitable donations collapsed as outraged ex-Oriel students cancelled bequests or disinherited the college from their wills.

It’s hard to believe many of the alumni are active Cecil Rhodes fans. But they clearly believed a great Oxford college, with a history dating back to 1326, should have the guts to stand up for itself instead of weakly appeasing a mob of smug, strident, self-righteous brats.

So now, at last, the college has seen sense. Its independent commission has recommended new scholarships for African students, fellowships in areas related to Rhodes’s legacy, an annual lecture and other initiatives – which seems reasonable enough to me.

But with rare and commendable courage, Oriel’s Provost, the former businessman Lord Mendoza, has ruled out removing the statue, blaming the ‘regulatory and financial challenges’ that an inevitable court case would bring.

It’s far better, he argues, to focus on improving life for today’s students, especially in Africa, than to spend any more time squabbling about a statue of a man who died in 1902.

So Rhodes won’t fall, after all. And quite right, too.

For far too long, university leaders have grovelled before tiny mobs of self-appointed ‘woke’ activists, who are often far more interested in showing off to their peers than in the past, present and future of the institutions they attack. 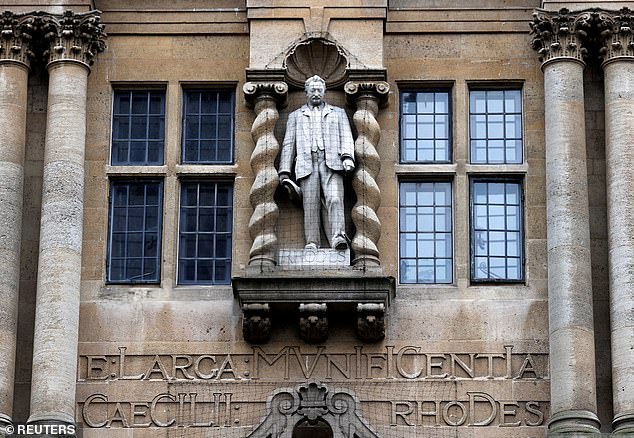 It’s hard to believe many of the alumni are active Cecil Rhodes fans. But they clearly believed a great Oxford college, with a history dating back to 1326, should have the guts to stand up for itself

Only a fanatic believes that the way to build a better society lies in tearing down statues. Only an idiot thinks today’s youngsters have a monopoly on moral purity. And nobody who loves history would ever be in the business of vandalising old buildings.

The irony, of course, is that if Oriel had given in to the mob, the backlash among their alumni would have been disastrous for their finances. So if Rhodes had fallen, they might have found it impossible to offer any scholarships at all.

But all’s well that ends well. The statue stays. The college has found a sensible compromise. And at long last, somebody has had the courage to stand up to the cranks and extremists of the woke movement. So good for Lord Mendoza. And good for Oriel.