It was the number that changed everything for Victoria – a wave of perplexing infections resulting in almost 800 so-called mystery coronavirus cases.

Victorian Premier Daniel Andrews cited the 760 mystery cases – of which the origins of infection remain unknown – as the catalyst for the government declaring a state of diaster and announcing harsh, stage four lockdown restrictions on Sunday. 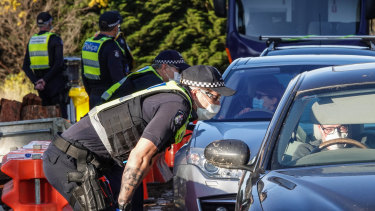 The number was a huge jump from the 49 mystery cases confirmed on Saturday, with health authorities attributing the alarming rise in part to the 671 cases detected in the last 24 hours and reclassification of other coronavirus infections.

These cases are worrying because the source of the infections have eluded the state's disease detectives, meaning they have been unable to link them to known outbreaks or positive cases and therefore isolate all close contacts to curb spread.

"Even just one case by itself is a concern," Professor Senanayake said. "So 700-odd is a real problem because it means there is a source of infection out there who is potentially, unknowingly infecting others as we speak."

The higher the number of community cases, the less likely contact tracing was feasible, he said.

“But even if contact tracing is failing, you would hope these restrictions will mitigate that risk somewhat because even though you can’t find the cases, they are not moving around as much and infecting others."

Professor Senanayake said for the latest lockdown to work, the definition of what essential workers are must be tightened.

"We have to think about what are essential workers for Victoria and weigh up the risks and the benefits," he said.

“This may include closing some food industries down for a short period of time.”

Abattoirs, for example, had been hotspots for outbreaks, but they were deemed essential because of the service provided, he said.

Staggering shifts, strict social distancing, scaling back workforces, frequent deep cleaning and reducing the mixing of staff in shared environment or during meal breaks was critical in high-risk industries if they were to remain open, he said.

"It's about working out if you can be more clever in terms of keeping business running by minimising human interaction in anyway possible."

Mr Andrews warned infections with no known source would likely rise in the coming days.

“The notion of 700 [cases] perhaps doesn’t seem a very high number in the context of some of the challenges we’ve had to describe and deal with,” he said.

“That’s when you have to take an abundance of caution and say, 'Let’s get this to the point where it’s down to a very small and manageable number'.”

Increased spread of the virus, asymptomatic people who are not getting tested despite mild illness and others who are breaching quarantine were likely drivers of these mystery cases, Deakin University epidemiology chair Catherine Bennett said.

“It is happening right across Melbourne now because there has been enough spread across the community that there are enough non-tested people along the chain to make it impossible to connect everybody up,” Professor Bennett said.

“The more a case is linked to a big cluster, the more likely you are to be able to join the dots and find everybody associated. There is something else going on with these mystery cases that is more about local transmission. What is about their movements? Are they doing certain things or going to certain places that change or increase their risk?"

“Whether you can see it or not this virus will die out because it doesn’t like being shut down like that,” she said.