The European Championship game between Denmark and Finland was suspended on Saturday following a terrifying scene that saw Danish midfielder Christian Eriksen receive medical attention after collapsing on the field in the first half of the game.

Play was immediately stopped at Parken Stadium in Copenhagen just before the end of the first half of the Group B match-up after Eriksen, 29, collapsed on the field where he laid unresponsive. 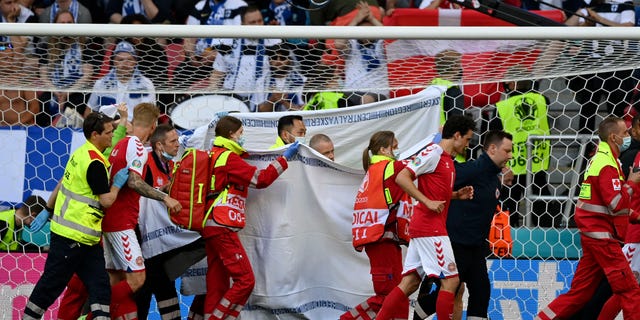 Denmark’s Christian Eriksen is taken away on a stretcher after collapsing on the pitch during the Euro 2020 soccer championship group B match between Denmark and Finland at Parken Stadium in Copenhagen, Saturday, June 12, 2021. (Stuart Franklin/Pool via AP)

Eriksen was taken off the field in a stretcher but images circulating on social media appeared to show the young player awake and holding his hand to his forehead.

UEFA announced on Twitter that Eriksen was “transferred to the hospital and has been stabilized.”

They also announced that the game has been suspended and that a “crisis meeting” has taken place to discuss what they will do going forward.

Eriksen received an overwhelming amount of support on social media from fans, players and soccer clubs around the world.

The Associated Press contributed to his report.